Much has been made about Singapore’s strawberry generation, and how parents last time used to discipline their children better by caning them, in contrast to today’s overprotective parents.

But it looks like the old-fashioned way of disciplining children is still alive and well, and present in at least one family that was caught on video in Jurong West:

The video sent in to Stomp shows a mother caning her daughter at the foot of an HDB flat in Jurong West on May 16, and quickly made the rounds over the Internet.

The instrument of choice used by the woman was a bamboo cane, and the deed was also being watched by the girl’s father, who only intervened when the girl grabbed on to the cane and refused to let go — a defence many of us who were punished by their parents in this way have used, showing that kids today are not that different from the way we were after all.

The father then proceeded to cane the girl himself.

According to The Straits Times, people who witnessed the scene actually called the police, who arrived and advised the parents not to cane their daughter in public.

As the story went viral and drew debate, a woman who identified herself as the mother in the video sent an apology via the media and explained what had happened.

According to The Straits Times, the mother who described herself as “a very strict mother”, discovered her daughter had lied to her with regards to tuition homework.

I discovered many empty worksheets from her tuition classes, which she insisted were questions that teacher did not ask her to do. Subsequently, we discovered that she had often conveniently said that to avoid doing her homework.

Several other exchanges between mother and daughter revealed the child had been lying to her mother on multiple occasions. This led to the woman punishing her daughter as shown in the viral video. 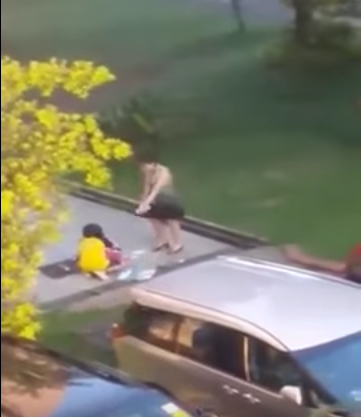 I just could not believe I have raised a liar.

Some of you will say, ‘of course, she is scared’. But as a mother who had said she was going to mete out the punishment, how will you react? At that point, I felt that I must keep to my word at least once but she struggled with me with the cane.

In the letter, the woman said that she has realised her mistake, and said both her and her husband need to seek help from counsellors.

She also assured the public that her children were in safe hands and are not abused.

While some may say it’s ok for parents to discipline their children with corporal punishment, the fact that it was carried out in public may have cause some to baulk.

The woman explained why the caning happened at that spot: It’s because her mother doesn’t allow her to cane her children at home as “grandparents are very protective of grandchildren and sometimes spoil them”.

I had tried to choose a deserted corner to discipline her as my intention is not to publicly humiliate her, but my girl cried very loudly.

There are 3 issues at play here: the caning itself, the fact that it was done in public, and the reason for the caning.

Also, public caning might be too much for some to watch, and like the police said, may alarm the public.

And it may also result in a scene that is captured on video and disseminated over the Internet, obviously

So in this regard, the parents of the girl might have gone a step too far.

However, just because we don’t see it, doesn’t mean it isn’t still happening.

Would there have been any objections had the punishment been meted in the family home?

Some may object to the caning of a child in itself, and believe that violence is not the answer to taming a misbehaving child,

Others, though, may think that there is nothing wrong with parents caning a child as long as they don’t go overboard.

The mother in the video was pressured and shamed into thinking there was a need to make a public apology — we hope that she apologised for her act of caning her child in public, and not for the caning itself.

The mother said that she caned her daughter as her test results had been dropping, and there were glaring mistakes in her tests that she did not check.

That in itself would not be a justifiable reason to cane a child, unfortunately — we have to accept that academic excellence isn’t attainable by every child.

However, she also said that her daughter was lying to her to avoid doing her homework — which we think is a more egregious offence that simply not doing well in tests.

Did the lying justify being caned? Well, some might say that lying is a bad character trait that justifies harsh means to correct, to prevent a child growing up having bad character.

Our children are under increasing pressure, especially in the area of schoolwork.

Most parent-child disputes nowadays are over academic, and this constant pressure on grade have since resulted in the increase of suicide rates among young students here.

So parents have a tough choice — to cane and risk your child being “damaged”, or spare the rod and spoil the child?

And are there any alternative ways of discipline that are as effective as corporal punishment?

Parents, the decision is yours. 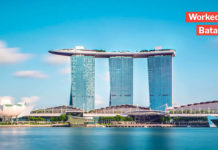