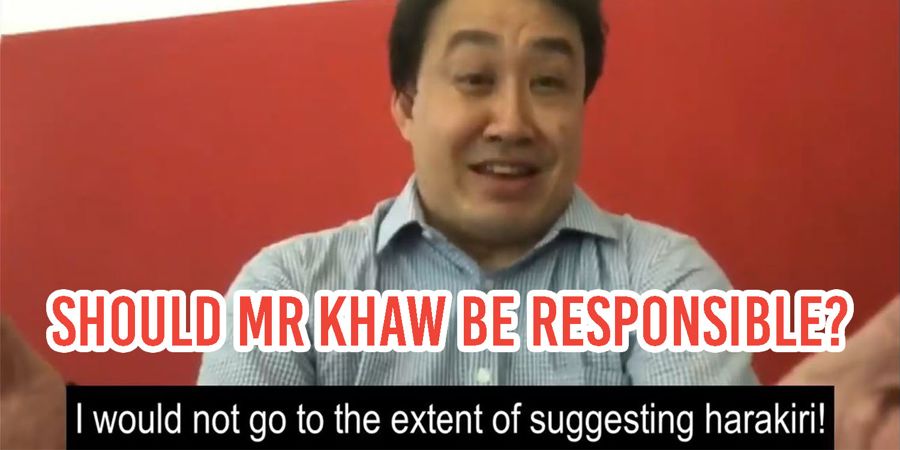 Dealing with the aftermath of an MRT collision incident can’t be easy for SMRT, LTA, and Transport Minister Khaw Boon Wan. Dealing with haters is even harder, especially on social media.

Although software glitches in the signalling systems are apparently to blame for the “Joo Koon Incident”, pundits are taking to social media to publish their not-so-politically correct opinions on the matter.

It’s time to trawl through seven of the best responses that have “made contact” with our Facebook feeds.

Topping the list is former National Solidarity Party Secretary-General Lim Tean, who heaps on the tough love to Mr Khaw in a 4-minute Facebook video that has since gone viral.

Calling it a “sad state of affairs” as our leaders “refuse to take responsibility”, he requests that Mr Khaw step down as Singaporeans have lost faith in our public transport.

He suggests that although the train systems are shiny and clean on the surface, the true problems are rooted deeply and concealed from the public, making Singapore a Potemkin country. Named after a Russian governor, a Potemkin village is a place built to deceive others into believing that the situation is better than its reality.

In particular, he singled out Mr Khaw for coming up with excuses and pushing the blame down the company.

Referencing Mr Khaw’s now infamous comments about hara-kiri, Mr Lim called for Mr Khaw to step down with the top management of SMRT as Singaporeans were not going to tolerate the “ridiculous situation anymore”.

Mr Lim directs his final blow towards Madam President Halimah, saying that he held her personally accountable. He mused that although it was within her powers, she did not call for a commission of inquiry to be formed even after the Bishan SMRT flooding incident.

Apparently more Singaporeans share Lim Tean’s views than we thought, as the video has exceeded 300,000 views at the time of writing.

Dr Chee, Secretary-General of Singapore Democratic Party, gets extra savage points for being direct. He simply shared his party’s article on Facebook and asked Mr Khaw to resign from his position.

Suggesting that Mr Khaw should stop blaming workers or “use them as scapegoats” he requests for Mr Khaw to step down and “take responsibility” following the potentially deadly collision.

Going by netizens’ responses to his post, a fair number of people are definitely seeking to hold someone or something accountable. But the question remains as to who or what that may be.

Turns out that back in September, it seems that Mr Khaw previously assured him that the integration of the new signalling equipment for the North-South and East-West MRT Lines was progressing well.

Mr Singh restates the written answers by Transport Minister Khaw Boon Wan to questions regarding the new signalling system in September, fielded by him and NCMP Dennis Tan.

He even linked the actual statement made by Mr Khaw as further proof.

According to Mr Khaw, SMRT, LTA, and system supplier Thales adopted a “cautious and progressive approach” doing more than 1,300 tests during non-service hours and solving multiple rounds of glitches with relevant software patches.

Seems like Mr Singh was pointing out that the work carried out didn’t seem to pay off in light of recent events.

Sharing the same sentiments as Mr Singh, NCMP Dennis Tan chose to strike back with new questions regarding the Joo Koon Incident. He also created a really long hashtag – #MRTtraincollisionatJooKoonstation – which will probably not catch on.

Tough as nails, Mr Tan questions the LTA about how the software protection feature was “inadvertently removed” when the first train passed the faulty signalling circuit.

He also asked about the role of the driver in the second train for its safe starting, moving forward or stopping.

Perhaps, he like the rest of us, simply wanted to find out why this couldn’t have been manually prevented by the driver by braking.

Mr Khaw expressed his deepest apologies for the incident and thanked affected commuters for being understanding.

Calling the collision the “first major incident involving the new signalling system” he advised SMRT and LTA to suspend train service on 16 Nov for system provider Thales to conduct a thorough check.

He also acknowledged that it had been an “awful day”. Wait, what?

To put that into context, let’s consider the events of the past few days.

Tuesday (14 Nov) was plagued by delays on the North-South line due to a train fault at Toa Payoh. This wasn’t reported on official SMRT’s Twitter or Facebook pages and caused outrage among commuters.

Thursday (16 Nov) brought us new hope with no train service between Joo Koon and Tuas Link for at least a month. Come evening peak hour, the North-East Line also hit with a train fault, disabling service at five stations.

Sorry Mr Khaw, but one “awful day” really doesn’t even come close to describing our reality.

In a heartfelt Facebook post, Minister for Home Affairs and Law Mr Shanmugam acknowledges that the public mood has been “sorely tested” despite the “overall improvement in transport”.

He tells the story of how Mr Khaw never “volunteered” for the job of Transport Minister, unlike in 2011 when he “volunteered” to join the Ministry of National Development to deal with housing issues.

Emphatically saying that it’s been a “tough 2 years for Boon Wan”, he stressed that he had “every confidence that he will deal with the challenges”.

Mr Shanmugam concludes with sharing that his thoughts and prayers with the victims of the collision.

It’s touching that Mr Shanmugam is standing by his fellow minister, but one can’t help but wonder if it’s just Mr Shanmugam’s way of telling that Mr Khaw to hang in there.

Because if he plans to follow in ex-Transport Minister Lui Tuck Yew’s footsteps, he only has 2 more years to go.

As a bonus, we checked for SMRT’s own response to the collision.

Although SMRT’s official Facebook page has remained relatively silent, it seems like SMRT has had enough of being maligned by fake news on the internet. They bravely chose to fire back at their haters instead.

The post circulating alleged that SMRT CEO Desmond Kuek had fired 50% of the night crew which, SMRT provided evidence to prove was untrue.

About 90 minutes later, another post was posted on SMRT’s Facebook page about CEO Desmond Kuek visiting and interacting with Jurong Station’s SMRT team.

Unfortunately, it drew a lot of flak from bewildered netizens as SMRT’s tone was called “unprofessional” and “defensive”, garnering close to 400 mostly negative comments.

Dealing With The Haters? We’re Working On It.

We hope that SMRT, LTA and Mr Khaw Boon Wan are not too discouraged by the barrage of hate comments that have come their way online.

When it comes to filtering negative feedback, we guess Singaporeans would say it’s a glitch resulting in our protection software being “inadvertently removed” too.

Meanwhile, our thoughts and prayers go out to the affected victims of not only the collision, but every commuter unfortunate enough to have experienced a train delay.

Let’s remember to mind the information gaps on social media platforms and get through this crazy ride together.