Must Share News – Independent News For Singaporeans
Home News 19 MRT Stations To Be Closed On Selected Days In December 2017... 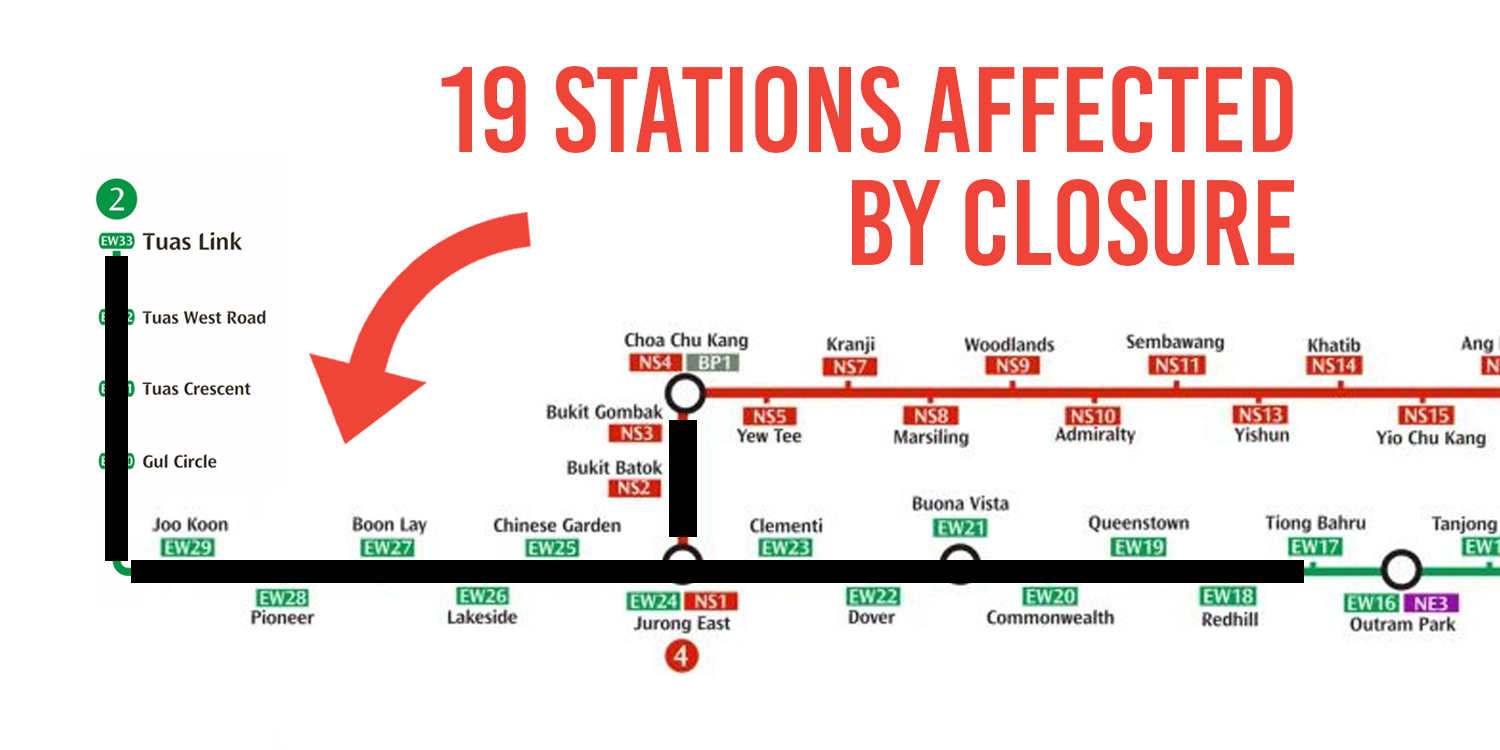 On two Sundays in December 2017 (10 & 17), selected MRT stations on the North-South and East-West Line will be fully closed for the entire day.

This is to provide SMRT engineers with extended operating hours to accelerate re-signalling works on the EWL.

Additionally, the stations will see earlier closures and later openings on the weekends (Friday – Sunday) of December as well.

So be sure to plan ahead lest you miss the last train after a wild night out.

Which stations are affected and when?

On Tuesday (21 Nov), LTA announced the following on their Facebook.

The stations affected by the revised engineering schedule are as follows:

All 19 stations will be closed on the Sundays of 10 & 17 December, so do take note if you’ve plans to travel on the green line during the two days.

As a typical Sunday in December sees 580,000 train trips along the stations, the closure and reduced hours will affect roughly 20,000 to 30,000 commuters per day. This means that over 50,000 Singaporeans combined will be required to seek out alternative travel routes on both Sundays.

According to LTA, parallel shuttle buses will be provided along the affected stations but they won’t be free. Fares for the bus services will follow that of the rail fare structure.

Are these decisions necessary?

Yes, the closure is necessary — according to LTA officials.

Here’s a video of their CEO Ngien Hoon Ping at a joint LTA-SMRT media briefing explaining why:

In short, this change will provide engineers with more than double the time – 3 hours to 7.5 hours – allocated daily for engineering and track access.

It will also significantly speed up re-signalling works on the EWL by 6 months — with the estimated completion now in June 2018 as opposed to end 2018.

Explaining how important the extra hours were, Mr Ngien stated that December was chosen as many Singaporeans tend to not be in the country during the period.

The additional engineering hours are very precious to LTA, SMRT and Thales. This will substantially accelerate the implementation of the new signalling system for the EWL and provide additional maintenance hours for the entire NSEWL network.

However, he also mentioned that full-day closures in 2018 might be a possibility as they still had “quite a lot of work to be done”.

If we do want to accelerate the completion of the CBTC system on the EWL, then from January onwards all the way to June, we will continue to look at additional engineering hours for SMRT and Thales to work on.

Could this finally be the start of our MRT trains returning to their former glory?

Understandably so, the decision to completely close off any MRT station – on a Sunday nonetheless – can’t be a popular one.

Surprisingly however, netizens aren’t completely criticizing LTA and SMRT for their decision.

Looks like they actually agree with the LTA and SMRT’s decision.

What a rare sight indeed.

Speaking of buses, it wouldn’t be Singapore if there wasn’t something to complain about, right?

We’re not saying they’re right, but they aren’t exactly wrong either.

At least Singaporeans can look forward to the new-and-improved Joo Koon-Gul Circle train services when it resumes in December, right?

In related news, train service between Joo Koon and Gul Circle is set to remain closed until at least June 2018.

This comes after LTA’s statement that they would be closing the Joo Koon-Gul Circle link for up to a month, following the Joo Koon train collision on 15 Nov.

Looks like those working at Tuas will have to continue relying on the – free – bridging bus service when travelling through the two stations for an additional six months at least. This means the Tuas Link Extension will effectively become a self-contained loop service.

At least train services looks to be heading back to its world-class standards come June 2018 — or so they promise, anyway.