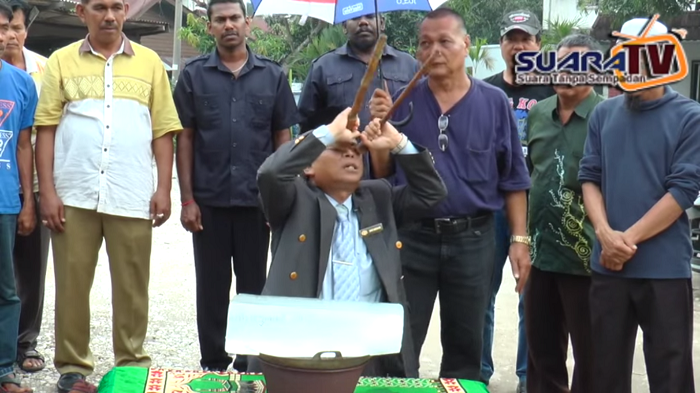 Controversial bomoh Ibrahim Mat Zin is back once again as he offers his services to help get rid of the haze.

The 81-year-old rose to fame and notoriety after performing rituals with coconuts, bamboo binoculars, walking canes, a fishing trap, and a carpet at Kuala Lumpur International Airport in the wake of MH370’s disappearance.

He is now back in the limelight, introducing a strange method believed to be able to solve Malaysia’s (and South-East Asia’s) haze problem.

Methods to solve the haze

The annual haze continues to worsen, with a state of emergency being officially declared in Riau, Indonesia, as the Pollutant Standards Index (PSI) reached 984 last Monday (14 Sept). Schools in Malaysia closed, while the governments in Singapore and Brunei have advised citizens to stay indoors.

Ibrahim though feels he may just have the solution in dealing with the haze, in the form of an ancient method that has  previously been used by generations of the past. The method involves praying over a block of ice while using his now trademark pair of bamboo binoculars.

According to Ibrahim, the block of ice symbolises a hope for cleaner air.

In a video by Malaysian news portal SUARA TV, Ibrahim can be seen chanting words of prayers in which he hopes the haze will disappear and that the quality of the air improves.  The experienced bomoh then concluded the whole ritual by praying for the well-being of Malaysians.

Haze to be first of priorities

The annual haze in South-East Asia is an issue that continues to plague the region. Despite measures to tackle the problem, the haze continues to return in a yearly assault of respiratory systems all around our side of the world.

The governments of South-east Asia must make this issue top of their priority list and tackle it head on if they are to ever eradicate this problem.

Bomohs like Ibrahim maybe well-meaning, but we’re not entirely sure a block on ice on a wok will do anything for air pollution.

Featured image via YouTube
With reference from Mig.me, AsiaOne