When you have been dominating the local e-payment market for 32 years, you tend to rest on your laurels, given a perennial lack of competition. However, when a new potential entrant threatens to disrupt your dominance, you will inevitably be forced to take action to maintain the large market share. It’s simple economics.

That must be how Singapore’s largest e-payment provider NETS is feeling despite announcing that it will roll out its new e-payment system, NETSPay in October 2017.

With many Singaporeans commending Razer CEO Tan Min-Liang after he submitted a proposal for an e-payment system on 7 Sept, it seems NETS feels threatened. This may be the reason why NETS CEO Jeffrey Goh aimed a few shots at Razer during a press conference on 12 Sept.

Today reported that Mr Goh had said that implementing e-payment systems is “no rocket science” and that “it is about usage” at the end of the day. This was an obvious dig at Razer and the proposal for an e-system to be up and running in 18 months that Mr Tan submitted to PM Lee Hsien Loong, after the latter’s call for a unified e-payment system.

The NETS CEO also warned that there would be little money making opportunities available, given that NETS themselves would be “waiving three years of fees” for hawkers. However, he still welcomed Razer into the e-payment industry:

“If Razer has a wallet that is so successful that it wants to come (into the market), do you think I will stop him from using my NETS QR (code system)? The answer is no. Please, come”

If that’s not paggro, we don’t know what is.

NETS launches new e-payment system but Singaporeans be like meh

According to ST, NETS is used by 37,000 merchants with plans to target “the remaining 30,000 merchants to adopt e-payment systems”. Their sizable merchant base means they are like the huge bully in the e-payment playground.

However, despite their market dominance, it seems that their public support is dwindling. Here do we know? Well, just check out the reception for their video on the new NETSPay.

The video, released on NETS’ Facebook page, only garnered 154 likes and 130 shares at this point of writing. That’s a pretty low figure for a company with a user base “of millions”. Now compare that to the reaction Razer CEO Tan Min-Liang received when he announced that his e-payment proposal was submitted on 7 Sept. With thousands of likes and shares, it’s pretty obvious who Singaporeans are backing. 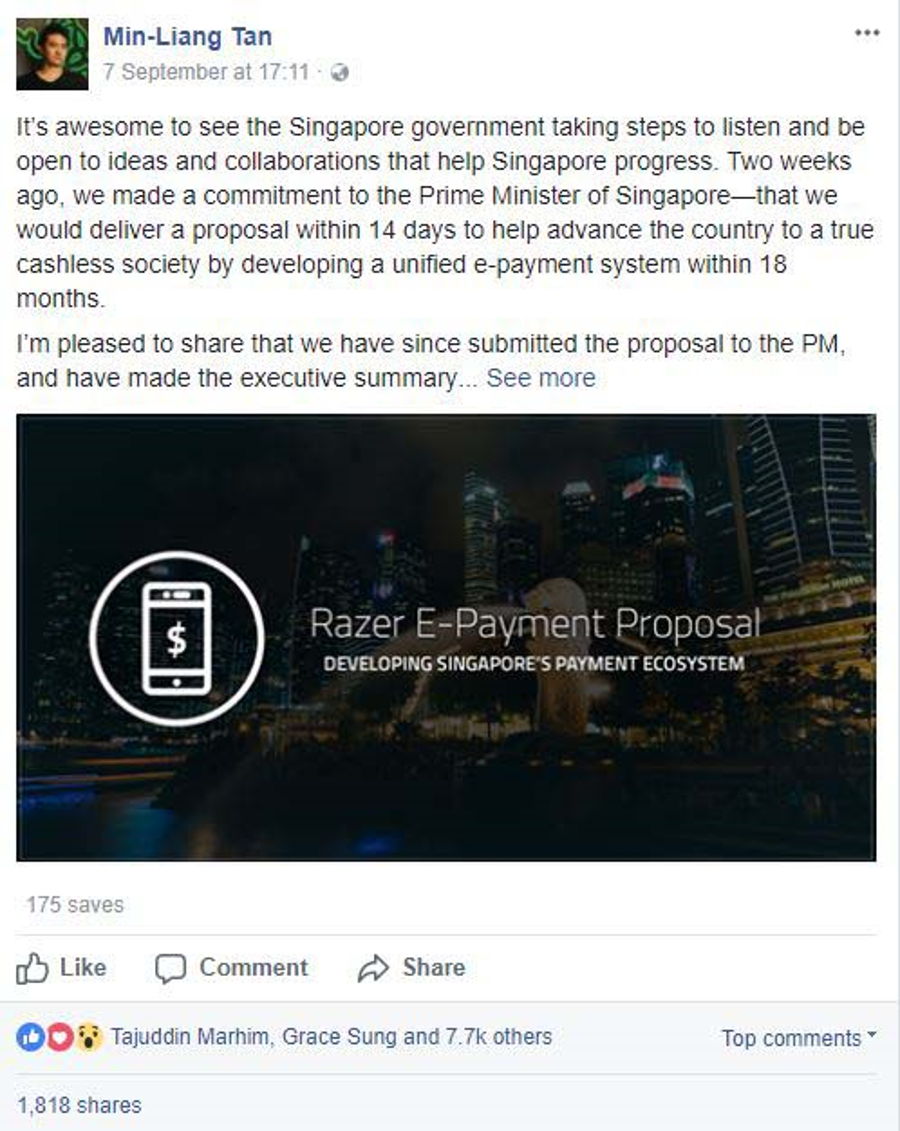 Now before you protest that Mr Tan’s post has been circulating for a longer period than NETS’ video, Mr Tan’s has shed light on the number of people who are eager to just work for Razer.

200 applicants in less than 24 hours is pretty impressive indeed.

With Singaporeans making it clear who they are rooting for, it is not wonder that Mr Goh is feeling the heat.

Despite the frosty comments from Mr Goh, Mr Tan refused to be drawn into a heated debated by agreeing to support NETS if they can roll out a successful e-payment network. His authentic kindness won over Singaporeans once again and they defended Razer’s CEO. Here are some of their comments.

The race is on

With many Singaporeans throwing their support behind Razer, will the tech company carry on with their plans to create Razerpay or will they support NETSPay?

Well, that will largely depend on how successful NETSPay is when it launches next month. However, we have a sneaking suspicion that this won’t be the last time we hear of tension between NETS and Razer.

Featured image from NETS and Wikipedia.