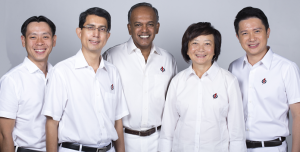 PAP unveils more candidates as the Polling day draws near

Since the Parliament was dissolved with the declaration of Polling day on 11 Sept, we are gearing towards the election fast.

The People’s Action Party (PAP) revealed their team for Nee Soon GRC at Nee Soon East PAP Branch this morning (26 August). The PAP team will be contesting against the Worker’s Party for the 5 seat constituency.

MustShareNews takes a closer look at the candidates for Nee Soon GRC.

He is an executive director of a homegrown food supply company Foodtraco Supplies. He invests in business opportunities and manages the company’s portfolio of assets.

Henry serves in the grassroots of two constituencies, Kebun Baru and Chong Pang. For the past few years, he has been deeply involved in grassroots committees which has focused on town planning, management, transport, as well as elderly social service support network.

He is the Chief Executive of ACRES (Animal Concerns Research and Education Society), a charity he founded when he was an undergraduate in 2001. He oversees the organisation, which focuses on fostering a spirit of volunteerism and working with the community to address animal welfare issues.

Since 2008, Louis has been volunteering in Nee Soon. From 2009 to 2014, Louis served in Chong Pang grassroots organization, under Minister K Shanmugam. He was a member of both the Youth Executive Committee and Community Club Management Committee. He assisted in organising events aimed at engaging youth.

From 2014 to 2015, he also helped Minister Tan Chuan-Jin in Kembangan-Chai Chee and served in the Citizens’ Consultative Committee, engaging the community and strengthening community spirit. In January 2015, he understudied Mr. Charles Chong at Joo Chiat before heading to Nee Soon East at the start of August 2015.

Will the addition of 2 new candidates be enough?

the diverse backgrounds and experiences of Louis Ng and Henry Kwek will benefit the Nee Soon team.

The de facto leader of Nee Soon GRC also shared his vision of a close-knit community with the kampung spirit for Nee Soon.