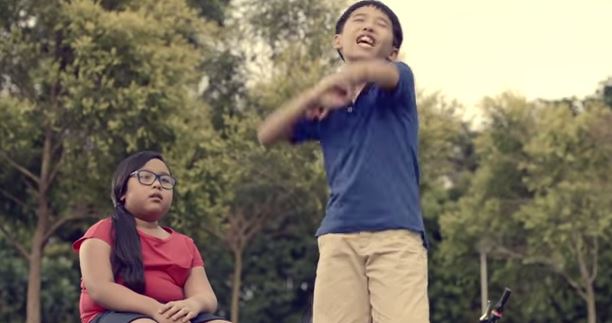 A series of commercials are running on national television, promoting a talk show on Channel 5 titled Let’s Think About It.

Panelists ranging from Minister of Culture, Community and Youth, Lawrence Wong, to Mark Lee (huh?) sit around and talk about why some Singaporeans hate some foreigners. The first episode aired yesterday and can be viewed on Toggle.

The ads are supposed to tell us that we shouldn’t blindly hate on foreigners for taking our jobs or doing the jobs Singaporeans don’t want to do.

No huge problem with those ads; they reflect the shortsightedness of complaints against foreigners.

The last ad has a problem though: it features kids blabbering on about being bankers and lawyers, and making a lot of money! I can 99% guarantee that nobody at that age would ever want to be a banker and worship money.

Most comments were unimpressed at the latest propaganda ad which seemed to be shoving meritocracy down everyone’s throats using kids, rather than actually tackling a Singaporean-foreigner divide:

Despite the propaganda play, some were encouraged at the Gahmen’s attempts at addressing a core issue Singaporeans are having.

Using kids to push these messages is almost exploitative

The other ads made some sense because the actors were portraying actual working adults, with their very adult woes, and focused solely on the foreigner issue.

“What Matters is that We do a Good Job” fails because it uses kids to deliver messages that they’ll never understand until several years later, and borders on exploitation.

You know there’s something wrong with Singapore society when kids are being made to talk about how much money they will earn in the future and bragging about how they’ll hire a lot of people, including their friends!

And all these kids have to do to fulfill their ambition of making a lot of money, is put in effort, study hard and they’ll become big bosses!

Pushing meritocracy down people’s throats isn’t going to make Singaporeans any less angry at foreigners, and shows just how little everything besides money matter in Singapore.

We’ve had a string of terrible public service ads, but “What Matters is that We do a Good Job” really takes the cake.