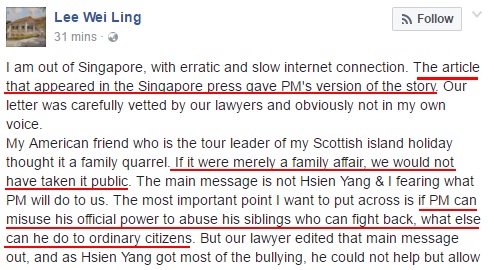 The Lee family dispute has received widespread international coverage from CNN to the BBC. Back home, coverage by our mainstream media has been subdued, devoid of the fanfare even the dreary WP town council sagas attract. Our local mainstream media have sensitively angled this story as a family dispute gone wrong. But it’s nowhere as simple as that.

Mainstream media has failed to address serious allegations Lee Wei Ling has made about PM Lee, and the muted coverage may have triggered her to release two new statements on Facebook.

So let’s look at the core issue and no, you don’t have to wait till tomorrow morning to read a sanitised version of it. These international publications get to the main issue straightaway in the first paragraphs of their coverage.

So what is this “misuse of power” Lee Wei Ling is alleging? She elaborates on this in her new statements.

Lee Wei Ling’s Statement at 1.18am

In the first post, she talks about how PM Lee set up a ‘…secret committee of ministers to get your way’.

When taken in context with the statement she released yesterday, she alleges:

To fully understand her new allegations, we have to take a look at the statements Lee Wei Ling made earlier. There’s a lot to read, so we extracted the most relevant parts.

Allegation 1: A “Secret Committee Of Ministers”?

A report by ST yesterday revealed the members of this Ministerial Committee are not publicly known, and the Prime Minister’s Office had declined providing additional information about the members. So yes, her first allegation is true. There is indeed a committee of ministers made up of secret members. She was informed in July 2016 that they will decide the fate of her family’s Oxley home.

Now this is where it gets interesting – because this committee was a relatively new development. Lee Wei Ling alleges PM Lee had reached final agreement with them on what to do with the house in late 2015. And that PM Lee undertook to recuse himself from all government decisions involving the house. Here is another screenshot from her statement yesterday.

However, she learned 6 months later that a Ministeral Committee made up of secret members was set up to decide the fate of the house.

In summary, this is the timeline according to Lee Wei Ling:

These developments are worrying because this is more than just a family feud. Many Singaporeans will be affected and PM Lee now has a very difficult decision to make.

So far, the PM’s office has released a statement confirming the Prime Minister has not being involved in Cabinet’s discussions concerning this committee.

Perhaps tomorrow, the PM’s Office could also issue a statement to let the public know:

That would immediately clear a lot of doubts.

Mainstream Media, The Ball Is In Your Court

With her new statements, it’s become clear what Lee Wei Ling’s issue is – this isn’t just a dispute about the family home. Let’s see if mainstream media finally decides to cover the allegations, or if they end up proving Li Shengwu’s words right with more muzzled reporting.