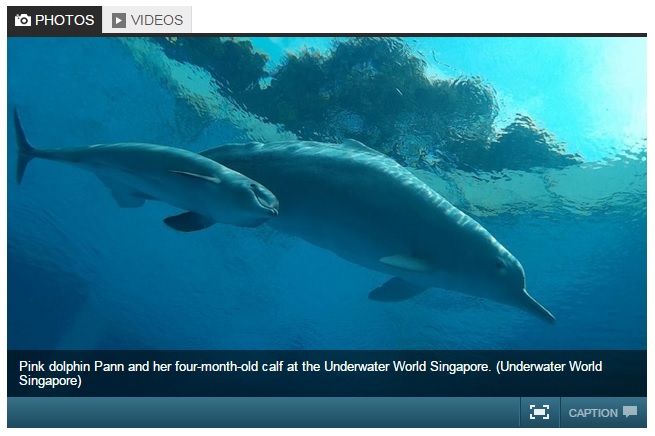 Underwater World Sentosa (UWS) confirmed the existence of a pink dolphin calf on Thursday (27 Nov), more than four months after it was born on 15 July.

The approximately one-meter long calf, said to be “bright and inquisitive, high-spirited and adventurous”, is yet to be named.

The announcement comes one month after controversy that a separate pink dolphin is suffering from skin cancer. There is no further news yet on the stricken dolphin, named Han.

UWS has some experience in birthing pink dolphins, when the first successful birth of a pink dolphin in a marine park was experienced in 2002.

No word yet on if Yeo’s has plans to give away bottles of collagen drink Pink Dolphin following this announcement.

Despite the trainers’ best efforts, marine parks are generally not good environments for the animals to live. Dolphins and other marine wildlife require swathes of open space to mate, explore, and live. There is no tank big enough for creatures as brilliant as dolphins to be truly happy. Even goldfish, depicted to be perfectly content with small bowls for decades, are recommended to be placed in aquariums no smaller than 57 litres. Forced removal from their natural habitat can also result in dramatic changes in animal personality and general disposition, leading to aggression and even suicide.

UWS was the first oceanarium in the world to try breeding pink dolphins in captivity, but they are hardly the world’s leader in animal welfare. Dolphins have died in under the breeding program, including one from complications after miscarriage. UWS has also faced criticism of the state of their tanks and enclosures.

At the same time, UWS provides essential research that is practically impossible to gather in the wild. All research gathered is immensely useful, and can go towards conservation of the species. Marine parks also allow visitors the opportunity to come into close contact with the animals, which can go a long way to spreading messages of conservation and awareness.

At the end of the day, marine parks play an important part in allowing the general public to learn more about aquatic creatures. However, when visitors go home and do a little more research, the general idea is that the very parks that teach so much about these animals are also doing a bad job of taking care of them. While marine parks play an important part in wildlife conservation, UWS could do better in taking care of the same animals they pledge to protect.