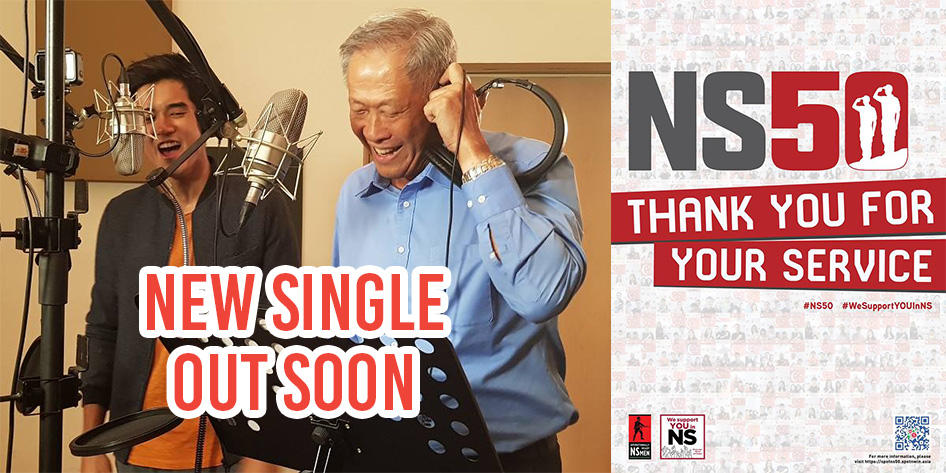 But we were surprised when an important person who is not well-known as a singer was also revealed to have lent his voice to the album — Defence Minister Ng Eng Hen.

Check out this photo of him singing with Nathan Hartono: 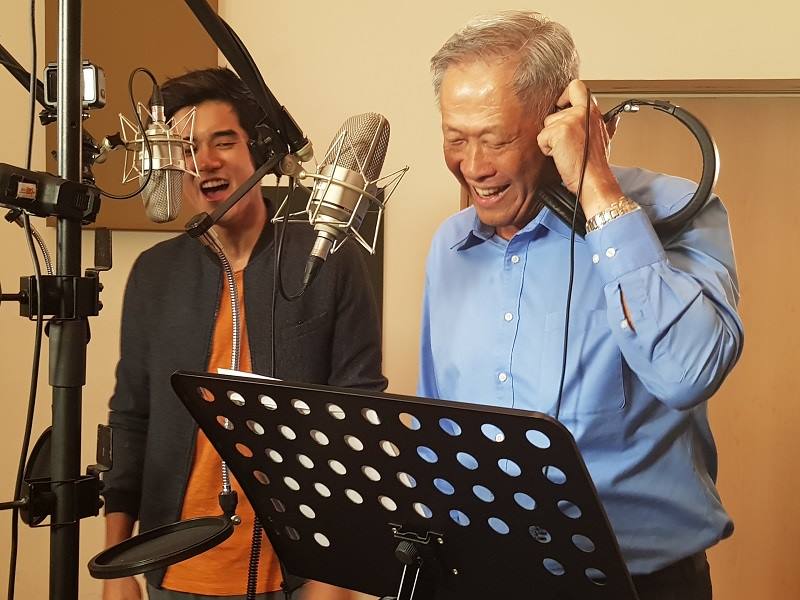 Tantalizing as it is to hear a minister sing, he will sadly not be singing in a track by himself — so fans won’t be able to hear his golden voice in all its solo glory.

As the photo shows, he will be singing with Hartono, as well as  the Camokakis from the Singapore Armed Forces Music and Drama Company.

The song is titled “We Are The People”, and Dr Ng released a sneak preview of the group recording their song on his Facebook page:

Another track to look out is Shigga Shay’s rap, “Book Out Day”, which features director Jack Neo.

The video has gained nearly 20,000 views since its release. Executive producer of the album Loh Aik Khoon explained to The Straits Times that the songs were based on themes such as “affinity with the family, unity and brotherhood, and not taking our home for granted”.

The songs will be performed “live” for the first time on Aug 5 and Aug 6 at the NS50 Sports Festival. If you are unable to make it for the event, fret not, as they will also be available on Soundcloud, Spotify and Apple Music.

Besides the commemorative album, the Families for Life Council and the Singapore Discovery Centre (SDC) are also organizing a slew of activities for NSmen to enjoy.

During the picnic, a few lucky Singaporeans will also be able to go on a tour of Pasir Laba Camp.

While Singaporeans are currently able to visit the Officer Cadet School (OCS) at the Singapore Armed Forces Training Institute (Safti), the Pasir Laba tour will give a few lucky Singaporeans access to restricted military training sites such as Peng Kang Hill and the army’s new indoor range.

The approximately 1-hour-long tour will be conducted 5 times, at 1-hour intervals starting from 1.05pm. Availability is on a first-come-first-served basis.

Here are some things you can see.

The 60m 3-sided tower is the most prominent feature of Safti Military Institute. The three sides represent the 3 services of the SAF, namely the Army, Navy and the Air Force. Officer cadets are made to run up the 256 steps as part of their initiation.

The view at the top gives an unparalleled view of Singapore stretching as far as Marina Bay Sands. It shows cadets what they are training to defend. 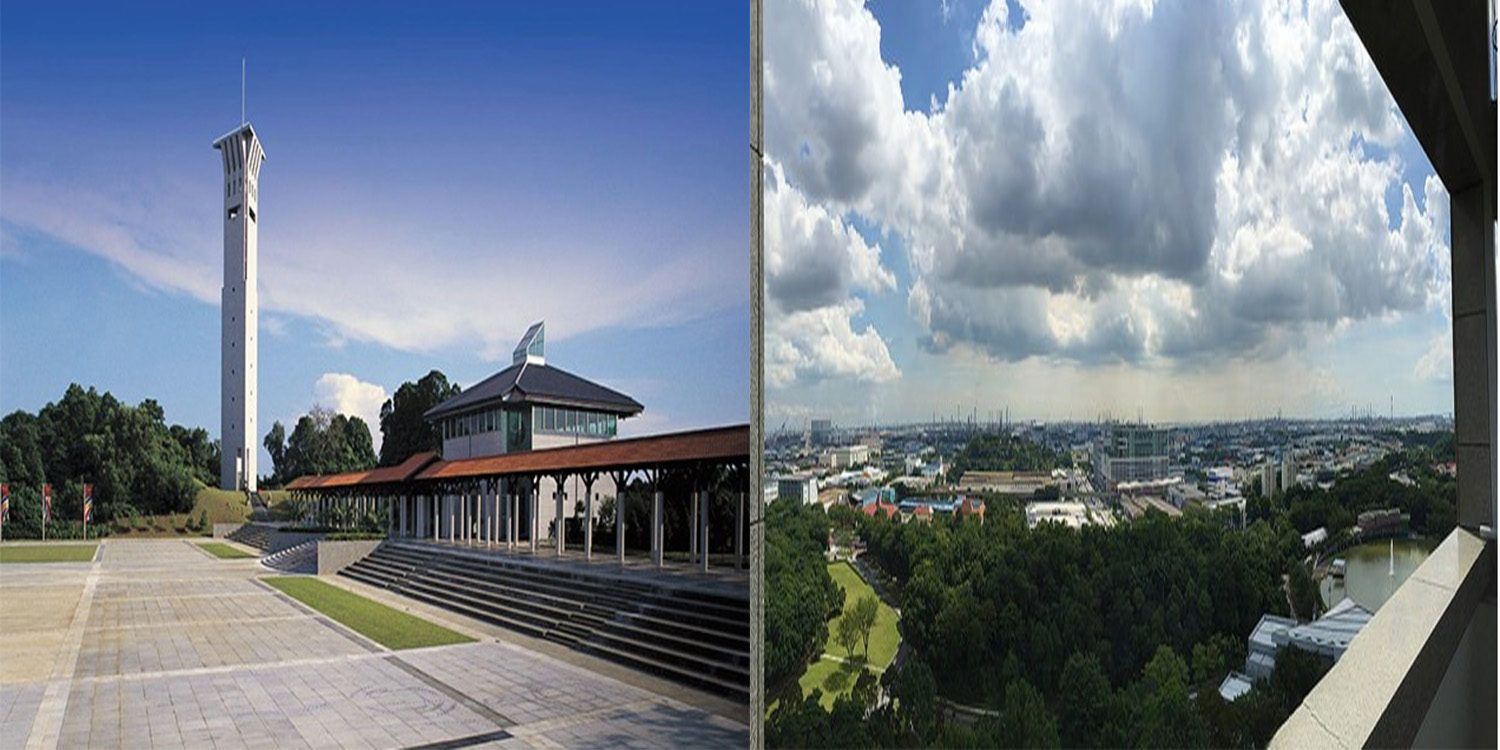 The hill is notorious for both specialists and officer cadets and is located behind Pasir Laba Camp. Used primarily for fire movement, the steep incline of the hill trains the speed and endurance of cadets.

It is not normally open to the public, so the tour would be the first time that cilivian Singaporeans will be able to see the training area.

The indoor range boasts state-of-the-art facilities that seek to increase the efficiency and effectiveness when training the shooting capabilities of soldiers.

Sheltered from inclement weather and operated by 3rd-party contractors, the MMRC allows soldiers to maximize the time spent at the range to hone their skills. Here is the schedule of the event, for those who want to take part: 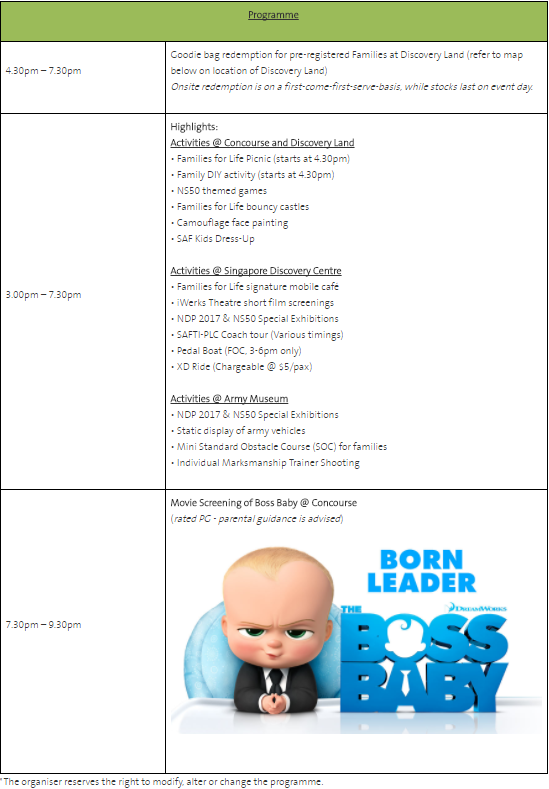 Admission is free, so if you are eager to experience the army life, do head down to the SDC on Aug 5.