It maybe have been a long three years but Singapore’s darling opposition politician Nicole Seah is finally back in the scene and this time, she is playing for Singapore’s largest opposition party.

According to mainstream media reports on 7 Dec, the former National Solidarity Party (NSP) candidate was seen walking the ground in East Coast GRC with the Workers’ Party (WP).

When reaching out for confirmation of Ms Seah’s role in the WP, The New Paper reported that both the political party and Ms Seah declined comment on matter. However, WP revealed that Ms Seah was indeed a “volunteer” with the party.

Ms Seah first shot to prominence in the 2011 General Elections as a 24 year old politician. Her well-thought out speeches, as well as a comparisons against then-PAP newcomer Tin Pei Ling sparked wide support for the National University of Singapore graduate.

However, the toll of being a prominent figure finally got the better of Ms Seah in 2014. After receiving “countless rape and death threats” and suffering both physical and mental exhaustion, Ms Seah decided to step down as the Assistant Secretary-General of NSP.

After stepping down, she took on a job in Thailand before returning to Singapore late in 2015 after trying the knot here.

But it seems that Ms Seah’s self-imposed political exile is finally over after she was spotted doing walkabouts with the WP in East Coast GRC.

If the advertising executive does choose to return to contest in the upcoming 2021 General Elections, that could spell trouble for the People’s Action Party (PAP). Here are four reasons why.

Ms Seah nearly caused a political upset in the 2011 General Elections after her team lost by a slim margin of 13.2% in the Marine Parade GRC. Based on the margin of victory, you were probably expecting that Ms Seah was going up against a less prominent PAP team.

Well, that’s where you’re wrong. The then-24 year old was part of an NSP team that took on our ex-PM Goh Chok Tong and his team.

It is commendable that the NSP was able to garner 43.4% of the votes given that they were facing off against such a political heavyweight. However, the main reason why they were able to do so was mainly due to one reason: Ms Nicole Seah.

When quizzed about the “lower-than-expected” vote share, Mr Goh pointed out that one of the factors was Ms Seah. He shared that Ms Seah had “communicated very well” and “spoke quite persuasively to the younger people as well as some older people”.

The veteran politician could sense that her strong oratorical skills were the reason for her popularity.

If Ms Seah was able to garner such a result against one of the biggest politicians in Singapore, imagine what she could do to a team of lesser politicians.

2. Outshone the rest of her NSP party members

Despite being the youngest candidate (24 years old) in the 2011 General Elections, Ms Seah never once allowed her youthfulness to be seen as a sign that she was not ready for Singapore’s largest political stage.

Her ability to face criticism dead on proved that age is truly just a number, just look how she handled a reporter who tried to undermine her credentials by asking the latter if she had much grassroots experience given her young age.

Undeterred, Ms Seah answered with poise and elegance that belied her years. This was of course in stark contrast with another female PAP debutant, who became notorious for her Kate Spade bag.

If you need more evidence, just compare the cheers she receives as compared to the team leader Mr Cheo Chai Chen. Do take note that Mr Cheo was a former Member of Parliament while Ms Seah was just a fresh face.

Perhaps ex-PM Goh’s analysis of the NSP team sums up this point best.

“I look at the NSP, I’ve been tracking them for some time, they appear to have only one person in charge and the four men are sort of leaving it to the young lady to campaign, to say all the things… My sense is that the other side has only one member to do all the talking for them and all the attraction for them.”

Well, we can’t say he was wrong.

3. Champion of the people

So what made Ms Seah a popular favourite amongst Singaporeans? Well, perhaps it was because she fought for the rights of Singaporeans.

One of Ms Seah’s first speeches was arguably her best. In her speech, Ms Seah challenged PM Lee’s comment that “voters in wards won by the opposition cannot expect the same improvements promised by the PAP”.

Ms Seah reminded Singaporeans that the money used by the government to improve infrastructure in Singapore belonged to the people and as such, they should not be afraid of voting for the opposition.

Taking on ex-PM Goh takes guts, but taking on two PMs, that’s something else.

Given that Ms Seah was seen in the East Coast GRC, one can probably expect the former NSP member to be fielded there if she does contest in the 2021 General Elections.

Now this could be an interesting prospect if the East Coast GRC WP’s team remains more or less intact.

Despite losing in the most recent General Elections in 2015, the WP team in East Coast GRC received the highest number of votes for an opposition party, garnering 39.3% of the votes. This was a team that comprised of up and coming WP candidates such as Daniel Goh, Gerald Giam, Mohamed Fairoz and Leon Perera.

Both Mr Goh and Mr Perera are currently Non-Constituency Members of Parliament (NCMP) with the latter impressing particularly in parliamentary debates. It should also be pointed out that Mr Giam also has parliamentary experience given that he served as an NCMP for one term, following the 2011 General Elections.

If Ms Seah were to join this already strong WP team, what’s not to say that the opposition might be in charge of two GRCs after the next elections?

With the PAP allegedly struggling to recruit new faces, as well as the aging state of the incumbent government, it seems that the opposition has just gained a slight edge over the ruling political party.

Ms Seah will undoubtedly be an asset to the opposition party should she step up to contest in the next general elections. We mean with ardent fans like this, surely an increase in votes is on the cards. 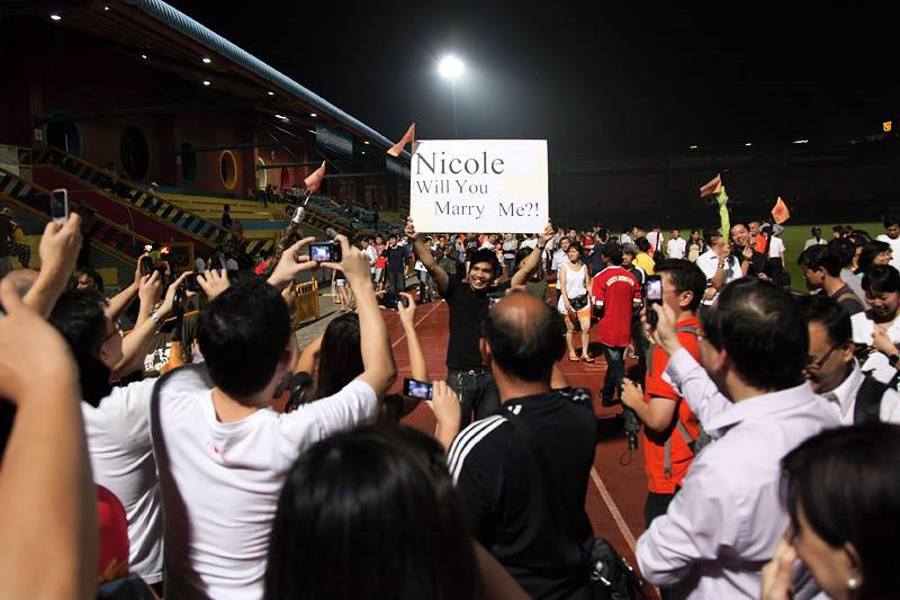 As political parties ramp up preparations, it seems that the road to the 2021 General Elections just got a lot more interesting.