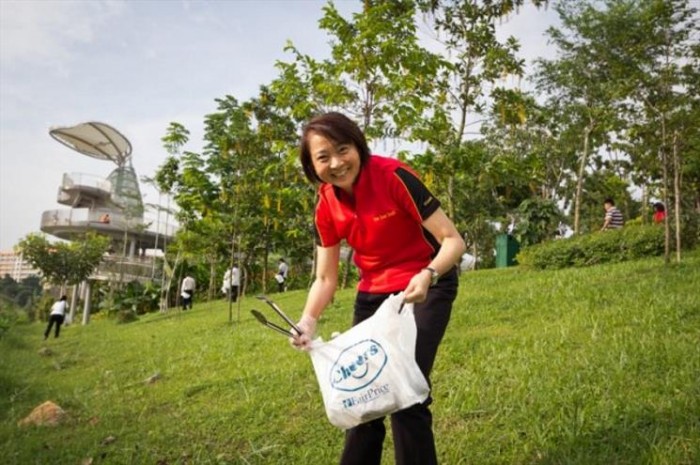 Having received strong criticism for her controversial proposal to reward Singapore litterbug informants with monetary incentives, “whacked left, right and centre,” is how Nee Soon GRC MP Lee Bee Wah describes her experience over the past week.

Basically, many resonated with our thoughts in our previous article about MP Lee Bee Wah — many felt that this new system would promote a tell-tale culture amongst us Singaporeans.

Which is why Ms Lee made her way down to the ONE FM studio last Tuesday (20 Oct) to further explain her plans on air.

You can check out the interview here.

During the interview, Glenn shared some citizens’ concerns about the proposal with MP Lee, and cooly mentioned Singapore’s famous reputation of being a “clean and green country”.

Because Ms Lee immediately countered, “You think this is a clean and green city? Not at all!”

The lady has a point though. And just look at the difference in ratios of people to cleaners in both cities. IT’S CRAZY.

To further illustrate how much litter Singapore can produce, she recalled Nee Soon South’s inaugural No Cleaners Day in 2012.

The scheme — which now happens annually — sees no cleaners deployed for one day and volunteers helping to clear the aftermath the day after.

“The first time, we picked up 1,340kg of litter in a day,” she told the visibly surprised radio team.

We Singaporeans totally need to reflect on ourselves.

We should all be Taiwan

After enlightening everyone on Singapore’s cleaned-ness, Ms Lee explained her inspiration for whistleblowing.

Her visit to Taiwan was what helped her formulate the proposal. The idea itself is based on a Taiwanese legislation: those who submit evidence of litterbugs in action may be rewarded with a portion of the fines imposed.

Ms Lee mentioned that their change in mindset only came about in the last 10 years. “If Taiwan can do it, why not Singapore?” she asked.

To further prove her point on the need for the new system, Ms Lee also cited a National Environment Agency (NEA) report that said a third of litterbugs committed the offence because they thought no one was watching.

So does this mean that the report-and-reward system will only be able to deal with this third of litterbugs?

What about the other two thirds!?

No worries, Ms Lee has a solution. She always does.

Except, this is where our students’ lives might be at stake.

This proposal needs to be part of a multi-pronged approach, I strongly believe that we have to start from school.

In Taiwan, schools are not given a budget to employ cleaners, she recounted. Students there have to take turns to clean the classrooms, the school compound, and even the toilets.

Oh and they exercise recycling too.

In short kids, she hopes for the same thing in Singapore.

We’d suppose schools wouldn’t allow students to take over the role of cleaners, since these kids already have so much to do.

A more viable option would be implementing a monthly or weekly “No Cleaners Day” in schools instead.

However, if the no-cleaner-forever idea actually takes place, then, good luck kids.

On the bright side, the initiative will help open kids to more options in terms of job-searching.

Throw in a certificate and they could all be certified cleaners 😀

Changing Singapore, one piece of litter at a time

At the end of the day, Ms Lee just wishes for all Singaporeans to play a part in making the country truly a clean and green city.

And that should be the way.

It’s truly inspiring how Ms Lee went on air to reach out to the concerns of the many Singaporeans regarding her proposal. And the amount of research she put into this — backing up whatever she said with cold hard facts — just truly shows how badly she wants a change for the state of litter in Singapore.

She only means well.

And we really appreciate your efforts Ms Lee, we really do.

Meanwhile, nothing has been confirmed yet, and the NEA is still looking into the implementation of this system.

But remember, you can run but you can’t hide!

Featured image via publichygienecouncil
With reference to The New Paper