Must Share News – Independent News For Singaporeans
Home Current Affairs A Scientist Is Giving $1,000 Of Her Salary To Fund Aspiring Artists...

There’s got to be a catch, right?

Frustrated by her uninspiring job at A*STAR, a Singaporean scientist is giving away part of her salary as a grant for local art projects of any genre, including visual arts, music, film, and literature.

The brainchild of Dr Eng Kai Er — who is also a dancer-choreographer — the No Star Arts Grant offers $1,000 every month to aspiring artists. Recipients will be decided by Dr Eng herself, who will favour projects typically ignored by other funding sources, such as work that involves “LGBT themes, sexual themes, and political art”.

The name of the grant and its Tumblr page allude to Dr Eng’s unhappiness and lack of interest in her current bonded job, and she hopes to change the world by providing an avenue to fund other’s interests.

Netizens have responded positively, proclaiming their admiration at the bold move.

Perhaps the “why” of the whole project is important. The reasoning behind the grant appear two-pronged.

Firstly, through the grant, Dr Eng hopes to affect others by helping average Singaporeans re-align their personal interests into paid work.

Secondly, by being a one-person selection panel, she wants to place herself in power, and hopes to use the process to understand the psyche and concept of power.

How Will This Impact The Arts Scene?

There is no mention of how the grant is expected to benefit the local arts scene, either directly or indirectly. She is not a philanthropist who only wants to see the arts scene flourish. She is not stepping up to the plate and kicking off an initiative to get people interested in the arts.

The work itself doesn’t have to have a message, be a certain quality, or even accessible. Instead, the work has to be important only to the artist.

This entire grant is just a prime example of the “narcissistic, mastabatory work” Dr Eng detests. The arts should not be overly self-indulgent, but strive entertain, inform, or at least make viewers think.

Think I’m being too harsh? Let’s take a look at the inaugural winner.

Our first recipient of the No Star Arts Grant is Andrew Chan, for his work entitled The Wedding Banquet. Let’s have a look at his project, based on a screenshot of the grant’s Tumblr page. 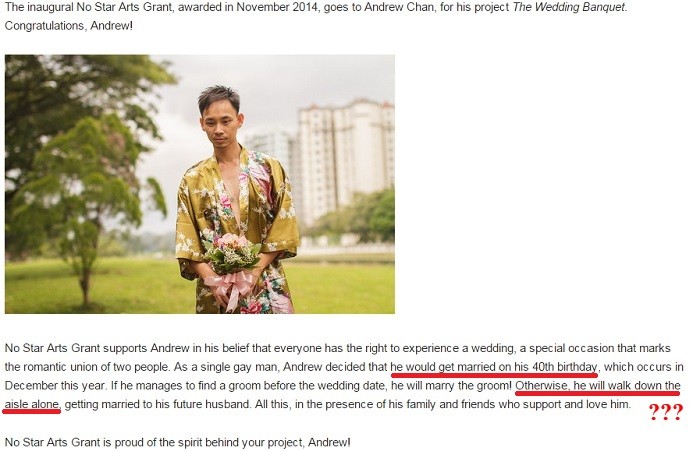 …right. So what exactly is his art work? There is no statement of purpose, and we’re not quite sure what the piece actually is. Based on the single paragraph provided, it seems like the grant will be used to fund his wedding costs. It’d better be the best damn wedding anyone’s ever been to if it qualifies as “art”.

Provide A Space For The Art Instead

The grant will be given out monthly for a year, with the last installment scheduled for October 2015. 12 works will be awarded grants, with no word on what will happen to the works after completion. The works should be exhibited to the public instead. This will increase the profile of the arts scene, and maybe pique the interest of the otherwise ambivalent Singaporean. The grant has, and will, generate publicity, and this publicity should not be put to waste. Provide a platform for these artists to show their work, and hopefully it will inspire more art in the future.