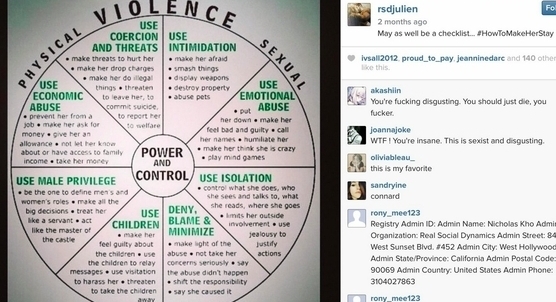 In recent weeks, we came to learn of Mr Julien Blanc, a sexist and racist pick-up artist who uses violence to “pick-up” women. One of his more extreme methods include shoving women to his crotch, with footage showing him practising this in real life. He was also filmed making racist comments about Asian women.

Online petitions have appeared all over the world, and people are protesting against his attempts to tour in their respective countries. Ms Charis Mah also joined in to keep him out of Singapore.

Guess what? It worked.

The Immigration & Checkpoints Authority (ICA) and Ministry of Social and Family Development (MSF) issued a statement:

“Blanc has been involved in seminars in various countries that advised men to use highly abusive techniques when dating women. Violence against women or any persons is against Singapore law. The ICA, in consultation with MSF, will not allow Mr Blanc into Singapore, especially if he is here to hold seminars or events that propagate violence against women or to participate in other objectionable activities in Singapore.”

A Celebratory Victory On Social Media

Ms Mah’s supporters cheered when the news broke, and she also thanked everyone who signed it. It seems like there’s hope for Singapore, after all.

A Win Against Rape Culture?

By restricting Blanc’s entry, we’re fighting against rape culture. Instead of blaming the victim, we’re restricting entry to a potential aggressor who may endanger the safety of women.

The battle is far from over, but without Blanc in the picture, women have one less thing to worry about.