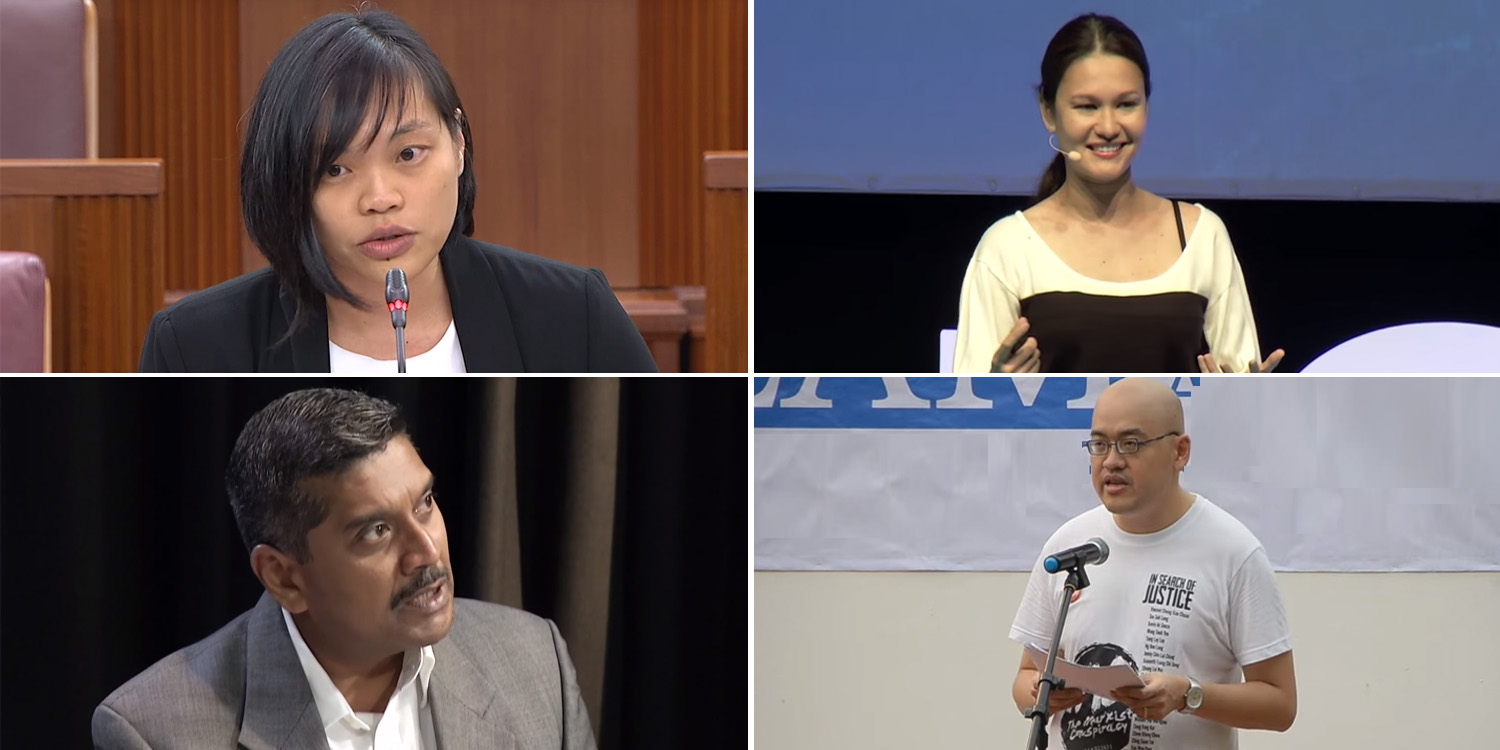 Nominated MPs May Not Be Elected Representatives But Their Words Matter

To say that Singapore has adapted the Westminster System to suit its own needs would be an understatement.

We have a smattering of parliamentary features that are uniquely Singaporean and can’t be found anywhere else.

And who could forget the Non-Constituency MP (NCMP) scheme, which guarantees Opposition voices in any parliamentary session.

The NCMP scheme offers up to 12 parliamentary seats to the best-performing losers of each General Election.

The exact number is decided by the number of seats actually won by the Opposition.

And elected MPs and NCMPs now have equal voting rights, after a series of constitutional amendments made in 2016.

What do NMPs do?

Sitting alongside the elected MPs and NCMPs are 9 nominated MPs (NMPs), who do not go through the rigour of a General Election.

Instead, they are appointed by the President on the advice of a Special Select Committee that comprises MPs from all elected parties.

Singaporeans can propose people to be NMPs but candidates have to meet the following criteria:

The NMP scheme was introduced in 1990 to contribute more independent and non-partisan views in Parliament.

NMPs serve for a two-and-a-half year term and can vote on all matters before Parliament, except the following:

These restrictions may restrict their power, but that hasn’t stopped NMPs from repeatedly speaking up on issues that matter to the Singaporean on the street.

In highly passionate speeches, they say things that many Singaporeans are thinking, earning them a whole lotta love online.

Here are some of our favourite NMP moments:

The one for the working poor

Few recent NMPs have captured the attention of netizens as much as Ms Kuik Shiao-Yin, the co-founder and director of The Thought Collective, a group of social businesses.

A video of her response to Budget 2017 quickly went viral and within the first 2 minutes, it’s easy to see why.

While praising the Government for its efforts to strengthen social safety nets and mitigate economic changes, Ms Kuik also called on it to go further to help Singapore’s working poor.

These families, she said, struggle to break out of the poverty cycle despite the help they receive in the form of weekly rations and education subsidies.

All these good and helpful gestures still feel like drops in a constantly leaking bucket.

Her speech also took issue with the attitude of some front-line public servants.

A compassionate communication of available solutions, rather than a ‘don’t-know-go-talk-to-your-MP’, approach matters so much.

Her voice quavering, Ms Kuik asked the Government to provide more support in childcare, healthcare and eldercare, to give the sandwiched class the “bandwidth” to deal with their issues.

Only then could they upskill and become the future-ready citizens that the Government urges them to be.

Ms Kuik’s words resonated strongly with netizens, who hailed as her as a powerful orator.

The one gunning for equality

In October 2007, NMP Mr Siew Kum Hong presented a petition to Parliament, arguing against the Ministry of Home Affairs’ proposal to retain Section 377A of the Penal Code, which criminalises consensual sex between men.

Pouncing on this disparity, Mr Siew accused the Government of misconstruing the intent of the Penal Code, so as to appease the “majority”.

Instead, its reasons for retaining 377A are that the majority of Singaporeans disapprove of homosexuality, and so 377A should be retained to reflect, or “sign-post”, this majority view of Singaporeans. But reflecting the morality of the majority is not a stated aim of the Penal Code, nor is it an accepted objective of the criminal law.

In the end, it’s no surprise that Parliament rejected the petition and retained 377A.

But homosexuals are a part of our society, and they include people who are often responsible, invaluable and highly respected, contributing members of society.

They, too, must have a place in this society. We shouldn’t make it harder than it already is for them to grow up and live in a society where they are different from most Singaporeans.

But homosexuals should not set the tone for Singapore’s society.

Still, Mr Siew’s efforts were not in vain. By bringing  an important conversation about homosexuality in Singapore to national attention, and may have inspired the inaugural Pink Dot, which took place just 18 months after the debate.

Despite being well-loved in cyberspace, Mr Siew’s bid for a second term as NMP was turned down by the Select Committee.

The one calling for greater political participation

Ms Eunice Olsen entered the home of Singaporeans as the co-host the local version of Wheel of Fortune.

But the bombshell actress entered our hearts when she became an NMP in 2004.

Over her two-year term, Ms Olsen spoke at length about a number of issues, among them transport accessibility, sex education and problem gambling.

But her most eloquent speech came towards the end of her tenure.

In 2008, Ms Olsen rose to support a parliamentary motion calling for new laws to require a by-election should the minority member or half or more members of a GRC vacate their seats midterm.

Dr Thio’s motion was a response to the sudden death of one of the GRC’s MPs, Dr Ong Chit Chung, in July 2008, and the Government’s subsequent ruling that no by-election was required to fill the vacant seat.

Criticising the decision, Ms Olsen argued that any form of election was a way to put people’s rights first and to give them a voice.

In the past, the Government said that by-elections could end up becoming distractions from more matters at hand. I think we should put more faith and trust in Singaporeans, at least if the Government would like Singaporeans to put their trust in its leadership.

Despite Dr Thio and Ms Olsen’s well-thought out arguments, the motion was thrown out by Parliament.

By-elections are still called at the discretion of the Prime Minister. The last one in 2016 saw the PAP holding on to Bukit Batok SMC, after the departure of former MP David Ong over an alleged affair.

And yesterday (9 Apr), the High Court dismissed an application to hold a by-election in the Marsiling-Yew Tee GRC, which features one less MP now that Mdm Halimah Yacob is Singapore’s president.

The one regardless of race, language or religion

In 2009, NMP and former television personality Mr Viswa Sadasivan questioned if it was time for Singapore to stop dividing the population based on race, and treat everyone as equals.

In his nearly 30-minute-long speech, Mr Sadasivan spoke eloquently about the uniqueness of Singapore’s racial harmony and called on fellow Singaporeans to actively use the National Pledge as a moral compass.

He then went on to describe the four major tenets of the Pledge and explained their significance to him on a personal level.

To Singaporeans listening, it was clear that Mr Sadasivan spoke from a place of love and immense patriotism for his country.

This was most evident when Mr Sadasivan, a Singaporean Indian, opined that some policies contradicted  Singapore’s commitment to building a united society regardless of race, language or religion.

Examples include the issue of Malay-Muslims in the Singapore Armed Forces, SAP schools and cultural elitism, the need for ethnic-based self-help groups, the need to maintain the current racial distribution in society and whether Singapore is ready for an ethnic-minority Prime Minister.

That issue had come up towards as Mr Lee chose a successor; he eventually decided that 1990s Singapore was not ready for a non-Chinese Prime Minister, giving us the glorious 13-year-rule of Mr Goh Chok Tong.

And given Mr Sadasivan’s thinly-veiled mention of this incident, the then-Minister Mentor rose to reply, in what The Straits Times described as one of Mr Lee’s last major speeches in Parliament.

Mr Lee insisted that the equality that Mr Sadasivan said Singapore deserved was an aspiration, not a reality. Explaining his Government’s attitude towards racial integration, he said,

The way that Singapore has made progress is by a realistic step-by-step forward approach. It may take us centuries before we get to a similar position as the Americans.

So while the Government rejected Mr Sadasivan’s call to move beyond race, it nonetheless started an important conversation on future generations’ attitudes towards racial harmony.