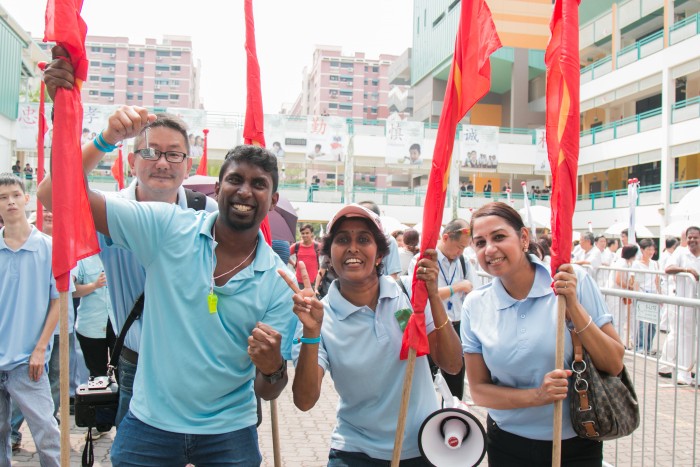 And so it begins in the heartlands…

Despite the 31 degree heat and air sticky with humidity, there was a certain level of energy and electricity (and makeshift paper fans) in the atmosphere at the nomination centre for Tampines GRC and Hougang SMC.

Passionate political discussions are not something you see every day in Singapore, being usually a topic only reserved for jaded coffeeshop uncles.

But on Nomination Day (1 Sept), politics was the only topic anyone was willing to discuss. 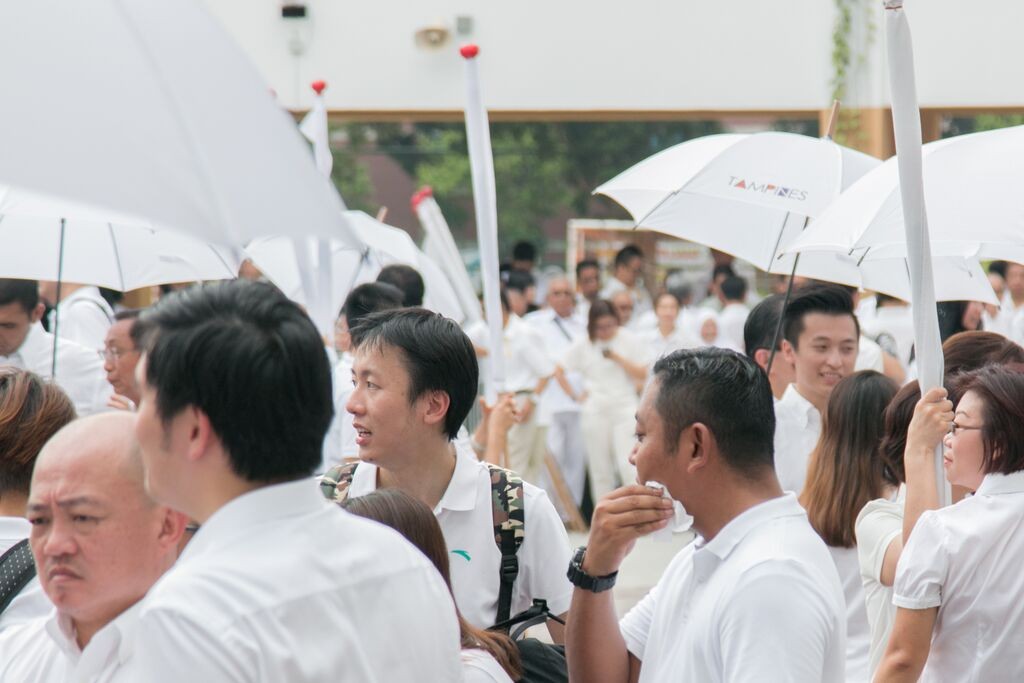 Upon arrival to the courtyard, we observed the clear distinction between the opposition and the People’s Action Party (PAP). I’m not just talking about the shades of white, vermillion, or blue.

Metal barricades were erected to divide the supporters, and in a way, contain them within the perimeters of the courtyard — a pretty interesting sight, almost as if the organisers expected a riot to start.

The front of the courtyard was populated with zealous supporters, some hanging off the metal rails, and others waving tightly coiled flags. The atmosphere was heady with supporters yelling throaty phrases of support for their respective parties all the way from their arrival since the gates opened.

The undercurrent of the event reminded me of the orientation days during my induction into junior college — with group leaders blaring out the names of your respective teams during inter-house matches.

Or in this case, rallies.

Other supporters weren’t quite so boisterous. In the corridors between school blocks, a collection of individuals were simply there to just — in their words — “have a look” . The majority of onlookers we spoke to were Tampines residents with no particular loyalty. 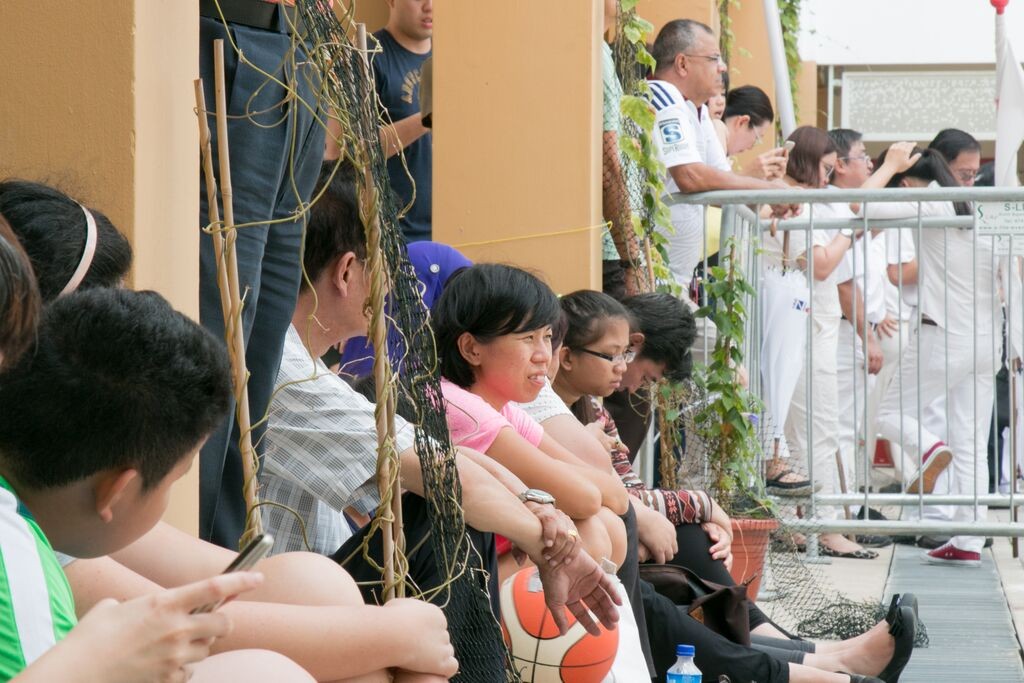 There seemed to be an air of animosity towards journalists amongst the supporters, with everyone falling to hushed tones whenever we approached, and waving me off with the usual excuses of “no comments” and “I’m not allowed to say anything”, or simply directing me to a more ‘experienced person’. Despite the nomination centre being situated in Tampines, most of the opposition supporters came from the Worker’s Party all the way from their homeground in Hougang.

I wasn’t the least bit surprised, as Hougang has been dominated by the Workers Party since 1991. The Blues appeared very much confident and supportive of its candidate, Png Eng Huat, being able to win once more. 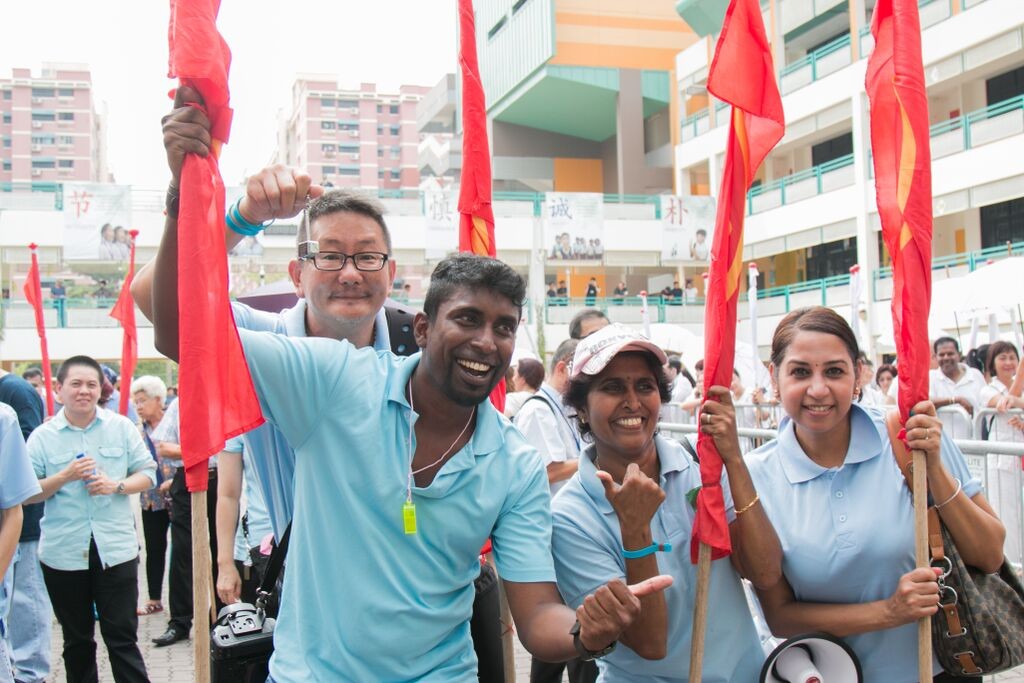 There were fewer National Solidarity Party supporters, but their smaller size did not once dampen their spirits. In fact, they were occasionally even louder than the supporters of the other two parties. 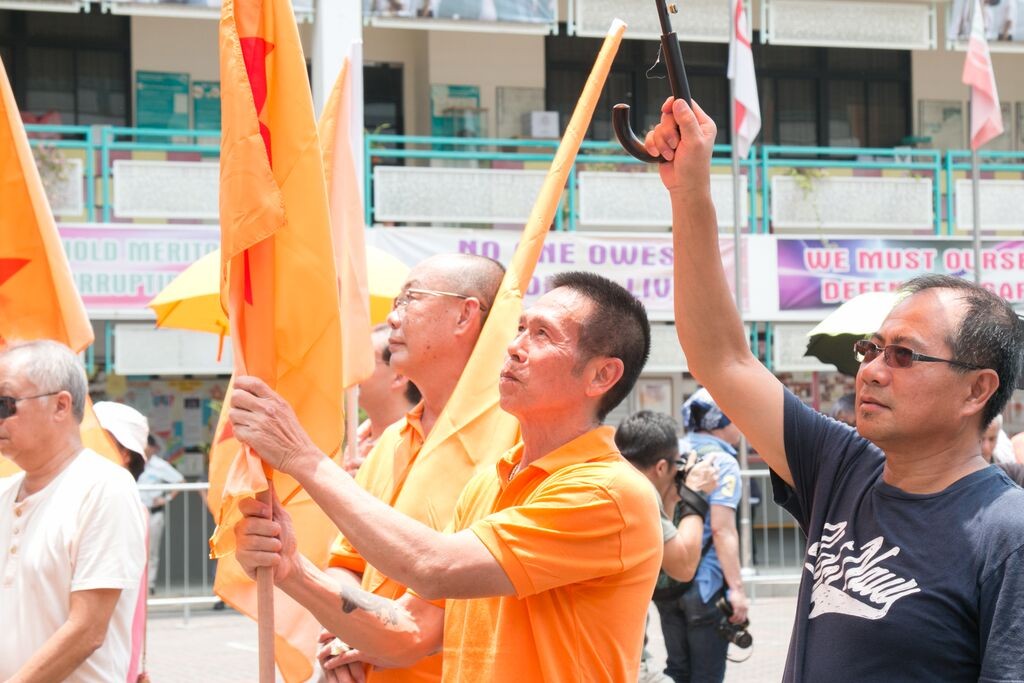 PAP, in their pristine and iconic white, were of course omnipresent at the school compound. Dominating in numbers and matching uniforms, their presence was hard to ignore.

Most of PAP’s supporters were from Tampines. In comparison, the incumbent’s Hougang supporters were far fewer, but nonetheless very distinguishable from other white shirts with custom made ‘HOUGANG’ polo t-shirts.

The ruling party’s uniformity and ability to create a certain image for themselves is truly unsurpassed. 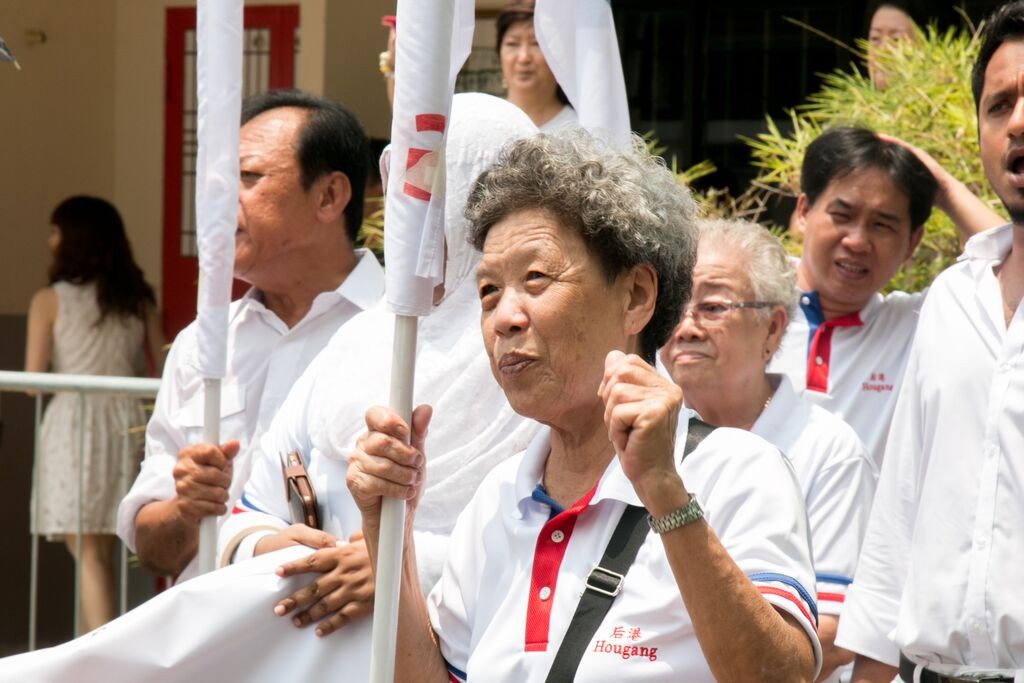 However, the sheer energy that the opposition supporters possessed will stay with me forever. Their unwavering vibrancy and spirit throughout the event never seemed to die down, despite the repeated delays for nominated candidates to give their speeches. 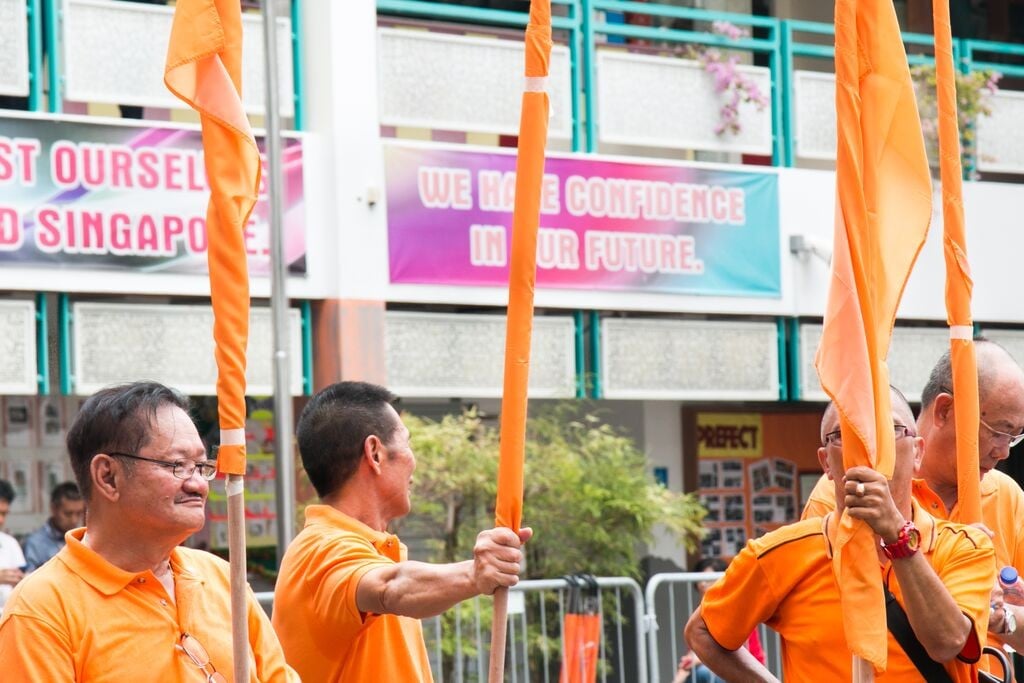 A vast majority of the PAP supporters for Tampines GRC appeared to be NTUC employees, who were given an off day to support Desmond Choo, a Deputy Director of NTUC contesting in his third elections. The energy of supporters reached its pinnacle at the announcement of the confirmed candidates. 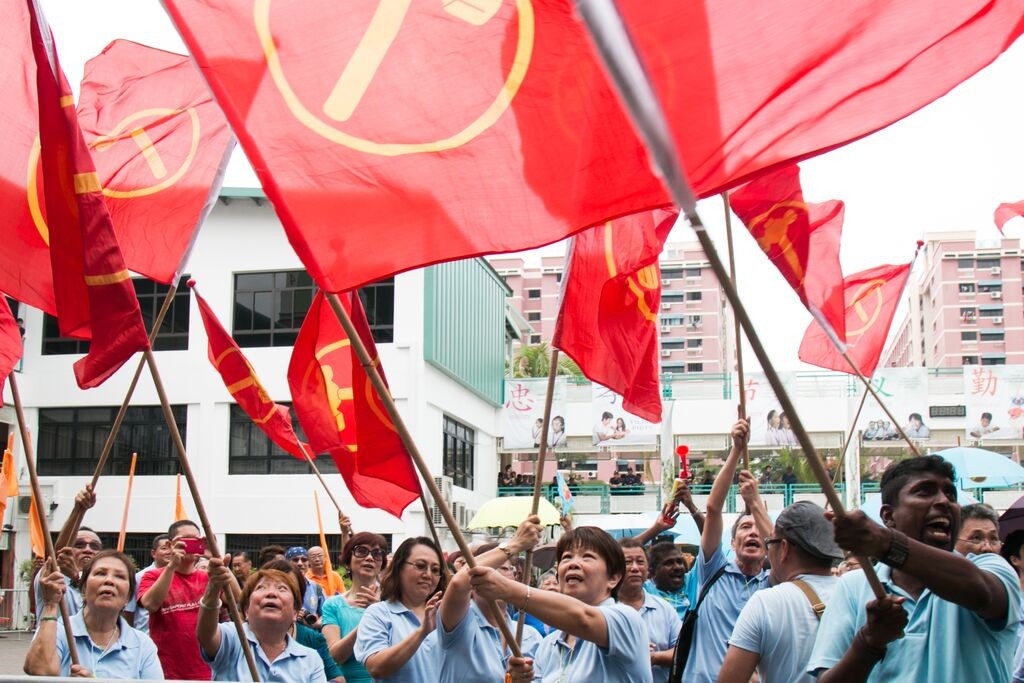 Hougang’s candidates were released first with PAP’s Lee Hong Chuan mainly repeating the team’s slogan of ‘Hougang hoseh!’ A PAP supporter of Hougang declined to give any comment regarding the two decade loss that the party suffered but assured me that “we’re very confident”. 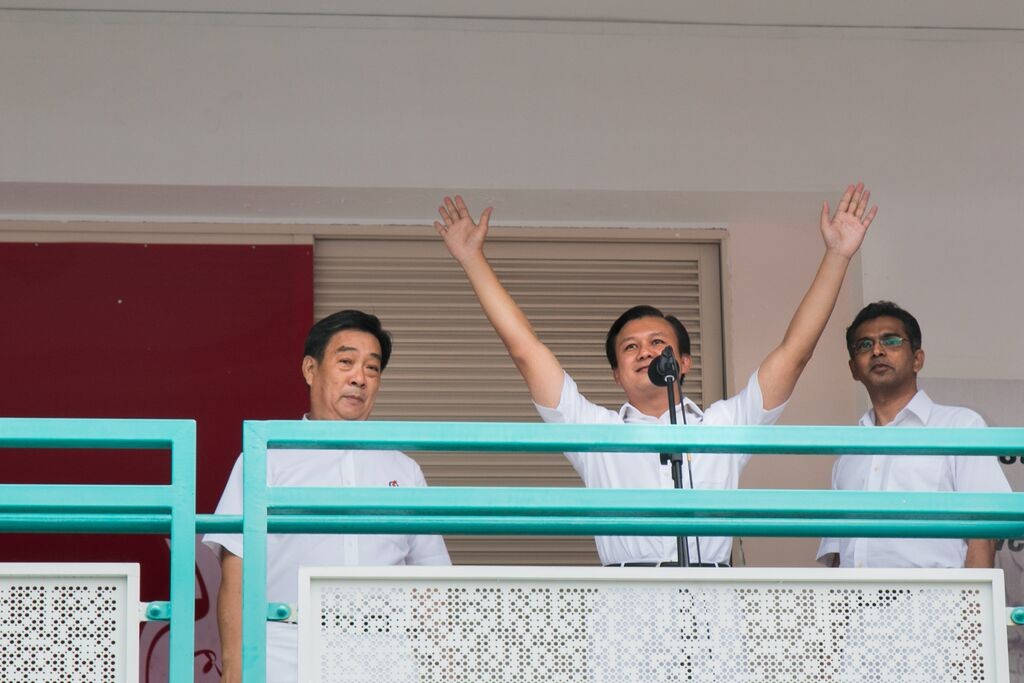 This was followed by Png Eng Huat and the WP’s promise to “empower [our] future” — an obvious allusion to their symbol of a hammer. For Tampines, the National Solidarity Party was introduced first. Almost immediately after NSP president Sebastian Teo addressed hot topics of immigration and the rising cost of living, NSP supporters left in a chorus of cheers. PAP representatives were more focused on creating a better home for its residents — the concept of family and environment was greatly emphasised by the PAP’s Tampines GRC anchor minister Heng Swee Keat. 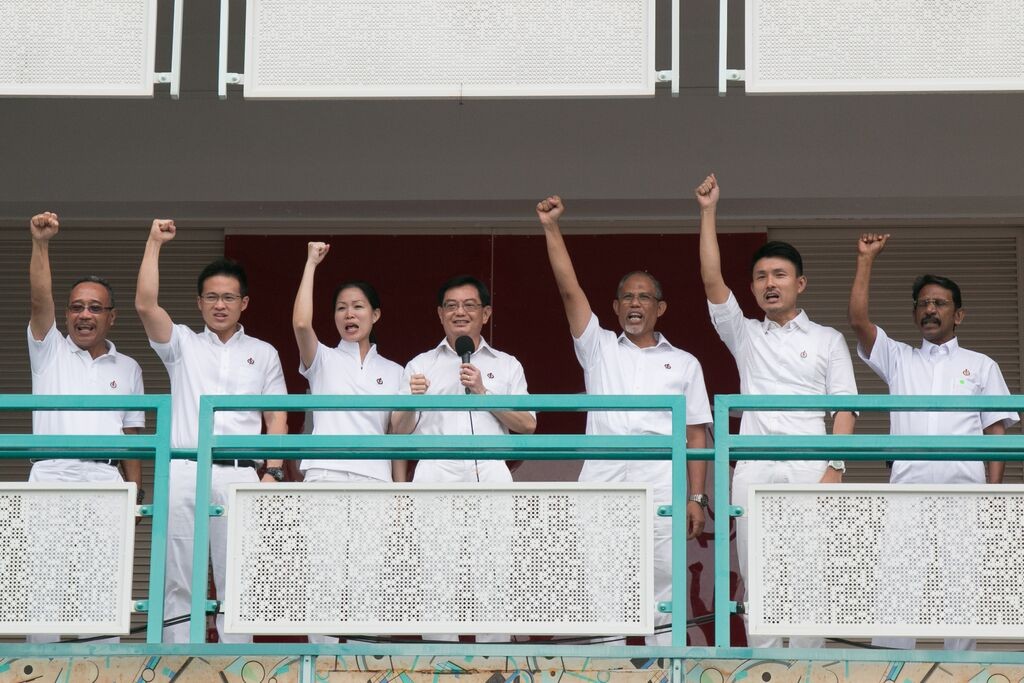 Delighted with the outcome of the nominees, the supporters of the opposition were first to filter out of the nomination centre.

PAP supporters waited for their candidates to enter the courtyard to greet them with leis of purple orchids and furious handshakes. Kind of a signature gesture iconic to them.

Filaments of energy remained in the school compound as I stayed back to absorb the events that unfolded. The one singular aspect that I loved — despite the blatant cliche — was the sheer enthusiasm everyone possessed for the betterment of Singapore as a country.

Supporters from each party came from all demographics. The conversations between supporters were just a smattering of dialects and languages.

This was exactly how the colourful Singapore of my primary school textbooks was always portrayed.