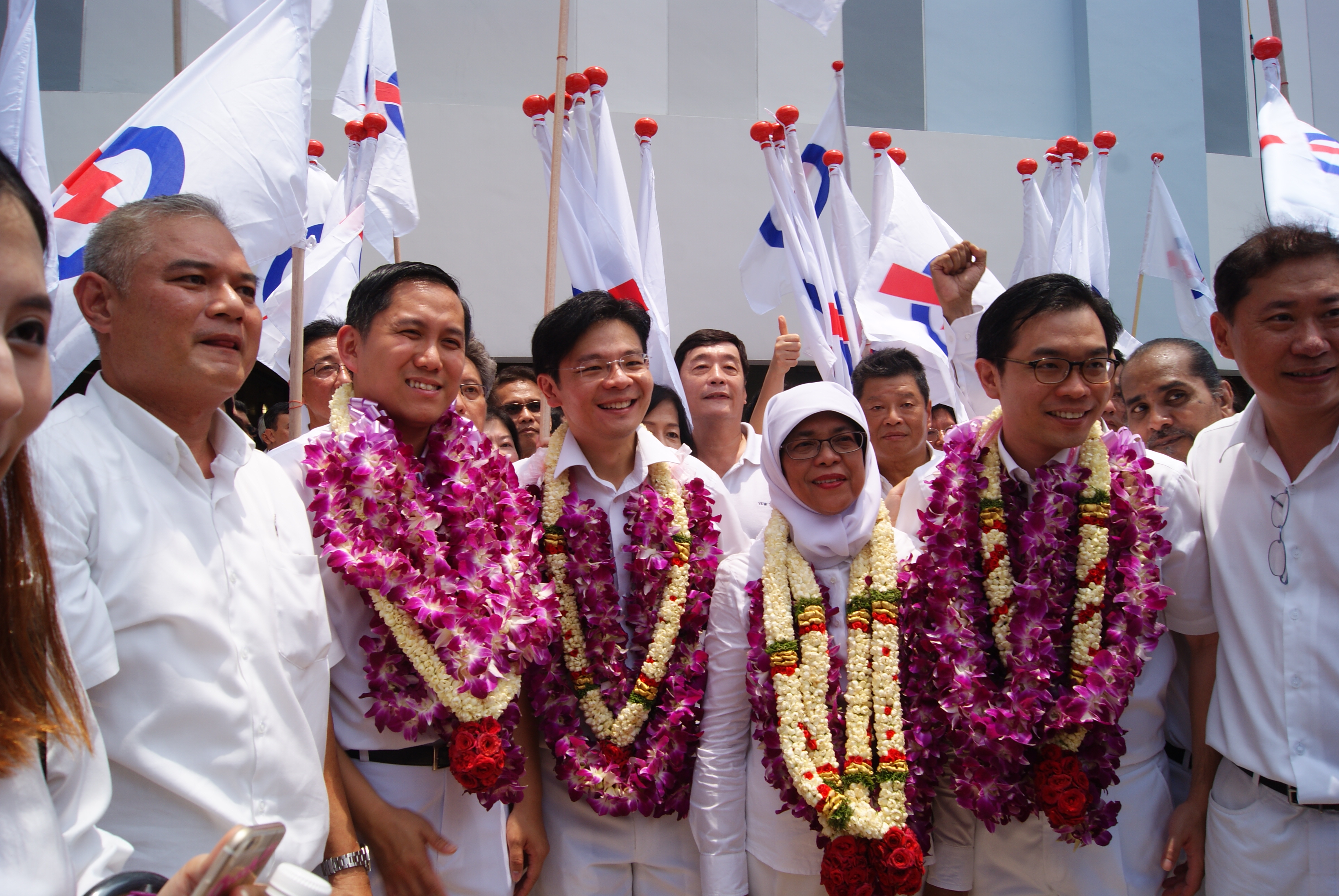 The Battles For The North 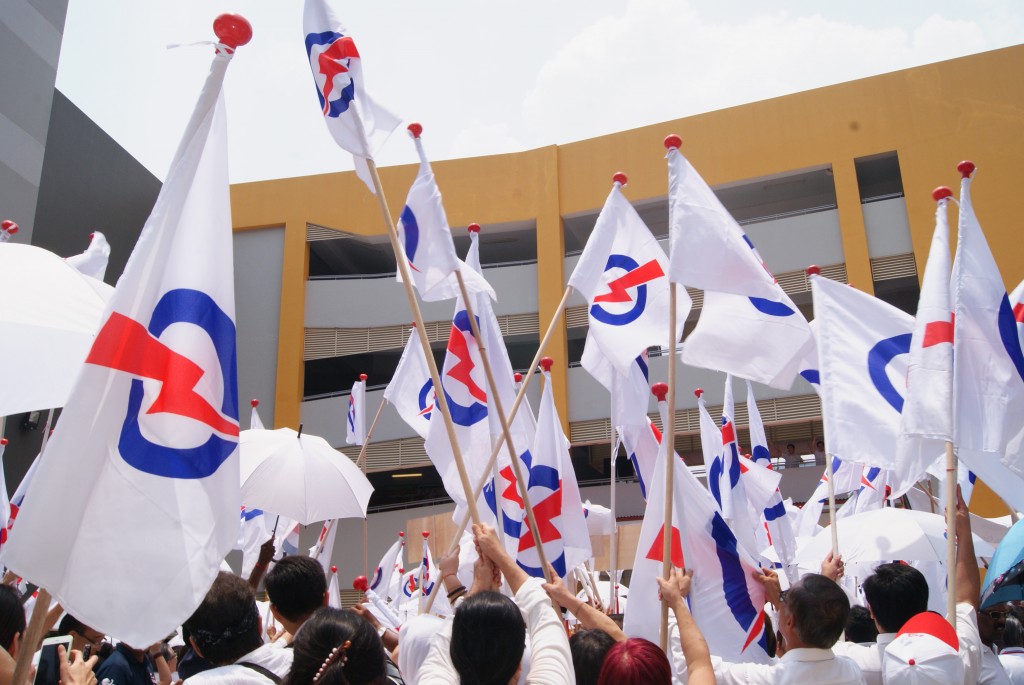 In a sea of white, it was difficult to stand out. If you wore anything that wasn’t white, you stuck out like a sore thumb — making it really easy to identify the opposition supporters.

Yishun Primary School saw several different parties congregate in a ridiculously sunny parade square to support the nominated candidates, but really, you were either white or un-white. 10:45 a.m: We arrive at Yishun Primary School. ‘Wah, so hot,’ I think. Although many had retreated to the indoor hall, there were also many, mostly PAP supporters, still milling around in the parade square.

I knew the candidates would appear after 12, but I didn’t know what else to do till then. 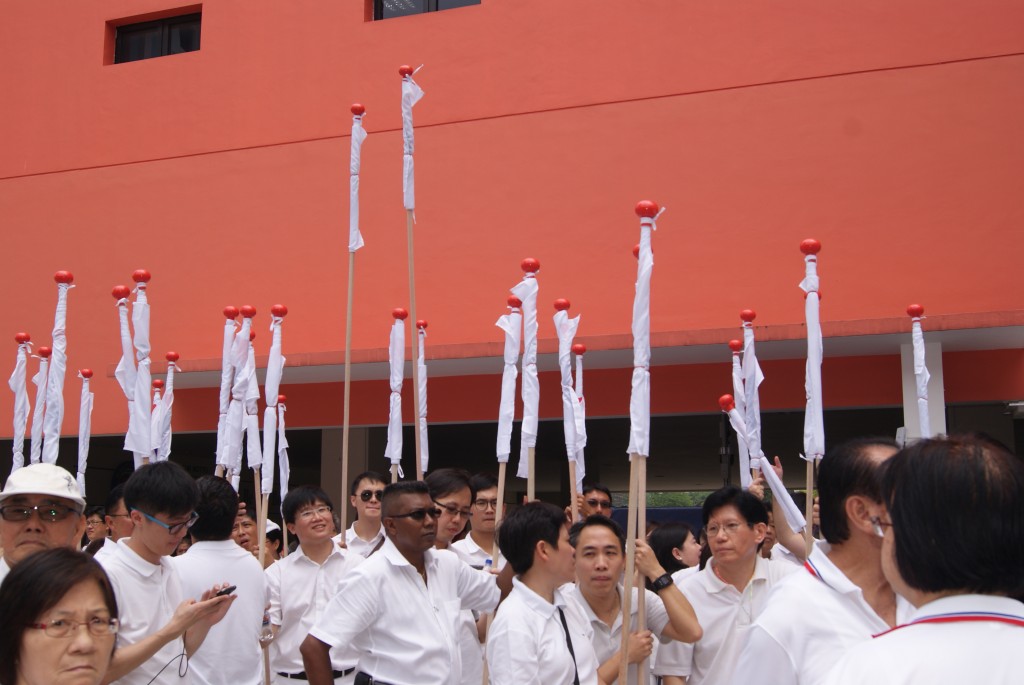 The largest opposition presence is from the SDP supporters, who are clad in red. I imagine if you had a bird’s-eye view, it would look the same as a drop of blood on a white bed. 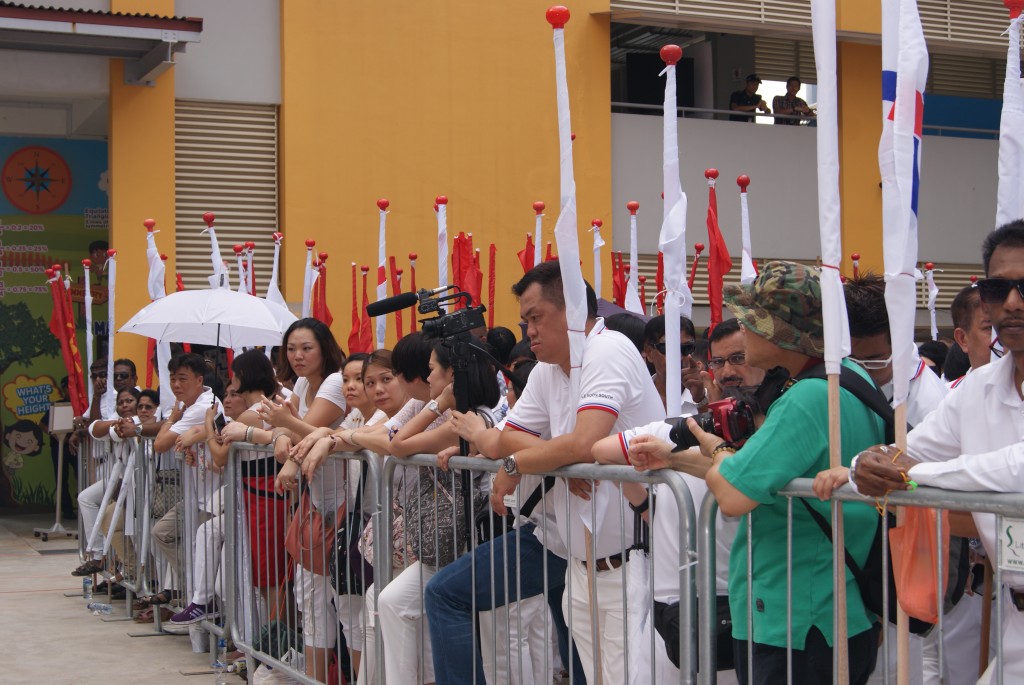 11:45 a.m: Nothing is happening. We know the candidates are behind a screen submitting their forms, but we can’t see them. The crowd is somewhat restless. I meet a friend from my army days — “just here to accompany my friends from the RC”, he says.

He’s dressed in white too.

12:15 p.m: The deadline for submissions has passed. I’m checking my phone every few minutes to see if there are surprise new candidates at other wards, and indeed, there are. Still unbearably hot — and I didn’t bring an umbrella. 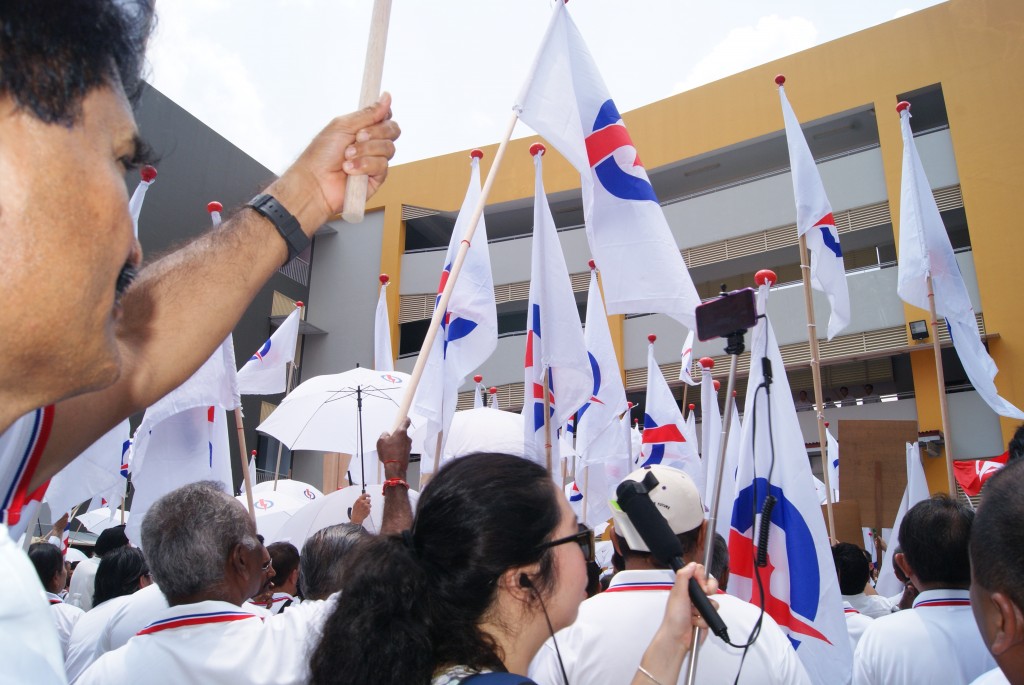 12:45 p.m: A cheer goes up as the Assistant Returning Officer speaks into a microphone — it’s the moment we’ve been waiting for.

She announces the candidates running for Marsiling-Yew Tee, Sembawang, and Nee Soon GRCs.

The loudest cheers are reserved for the ministers helming them — Khaw Boon Wan, K Shanmugam, and Lawrence Wong.

There are muted cheers for the opposition candidates — there aren’t really any big shots from the other side here. 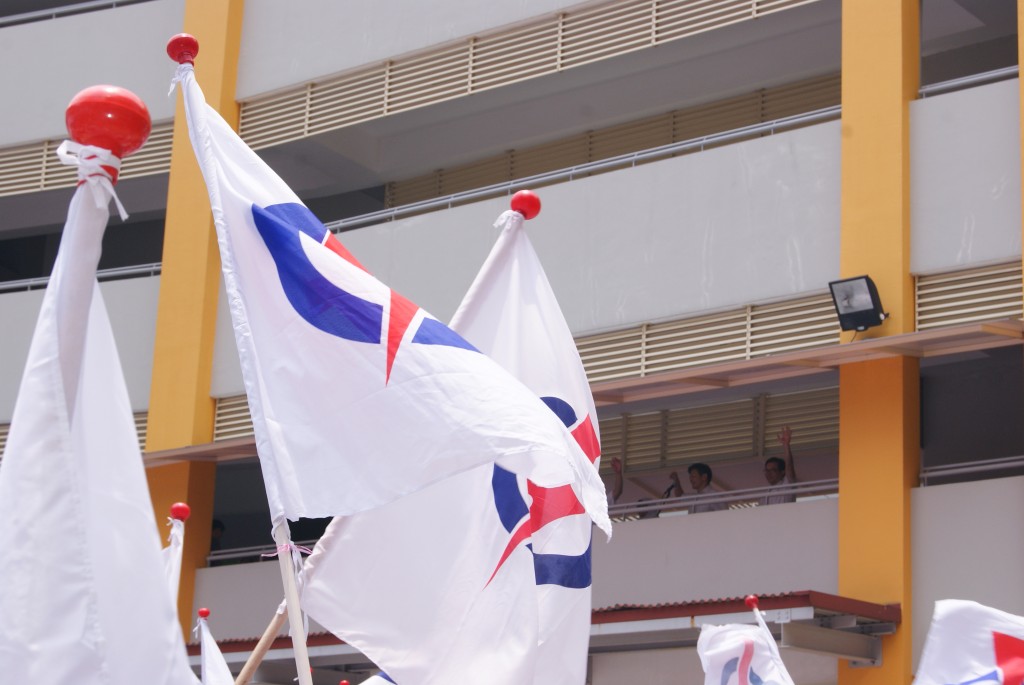 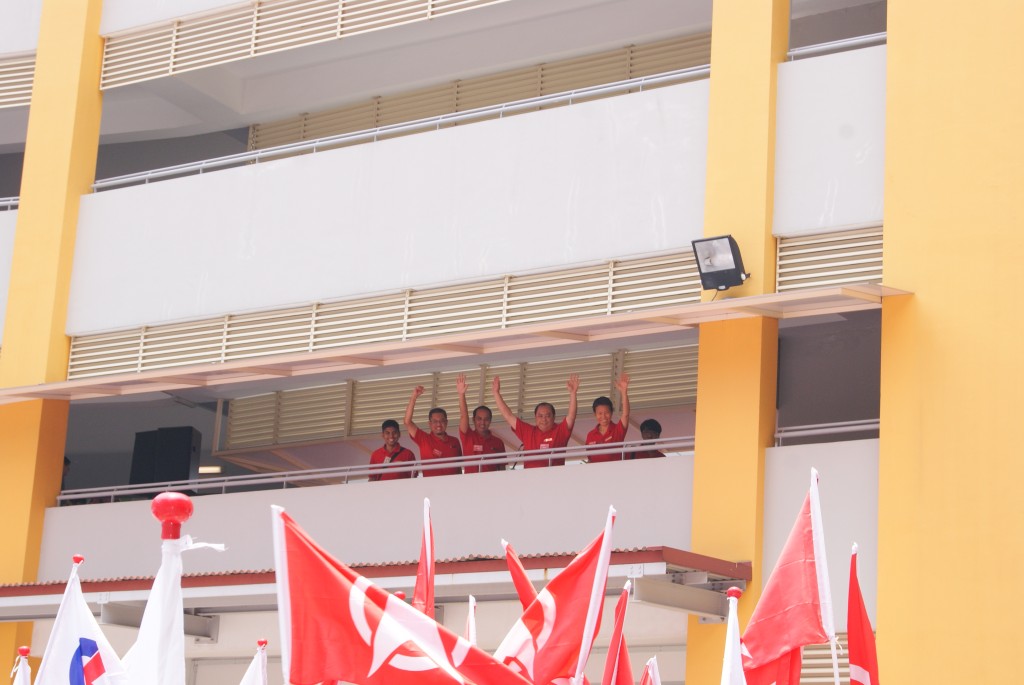 12:50 p.m: The teams make their way to the top to address their supporters.

The PAP teams get the loudest cheers, while the opposition teams seem somewhat muted – it’s like the PAP is playing at home, and the opposition parties are the away team.

The speeches are short and simple — “thank you all for coming”, “we will work hard to serve you better”, the PAP says. Khaw speaks briefly about a 5-year plan for Sembawang GRC.

“Thank you all for coming”, “we will give the people a voice to be heard in Parliament”, the opposition says to a largely silent audience.

It’s good to know that our sunbathing this fine Tuesday morning was appreciated by all parties. 1:10 p.m: The PAP teams make their way around the parade square to mingle and thank their supporters. They are mobbed like pop stars. The atmosphere is certainly akin to a One Direction concert.

There are cameras snapping everywhere you look. 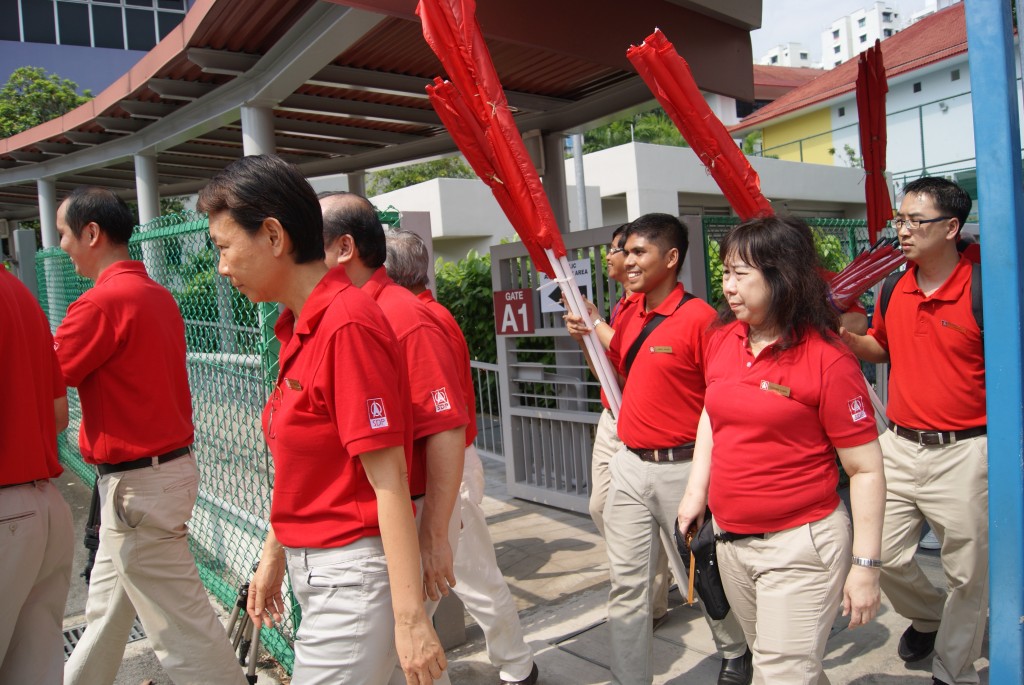 1:15 p.m: Meanwhile, the SDP contingent is leaving together with the candidates. 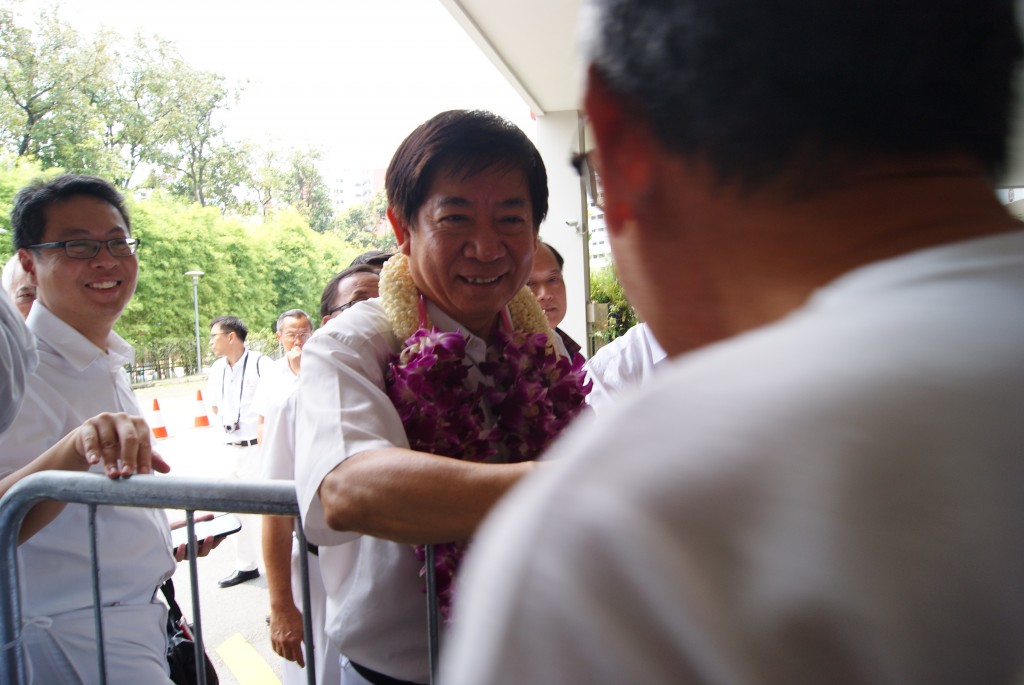 1:30 p.m: At last, the action is starting to die down. But there are surprises still — the PAP Sembawang team, headed by Mr Khaw Boon Wan, is waiting along the exit path to get your handshake.

1:35 p.m: We call it a day. As we take the long walk back to the MRT, I notice several chartered buses idly waiting on the roads as people in white board. I wonder where they’re going, and if there’s any free nasi lemak at the end of the ride.

Final Thoughts: There aren’t any big opposition names here, and they’re going up against very established names in the PAP with ministerial positions and many terms of experience.

The polls will really tell how much support there is for the men in white, but from what we saw today, the opposition parties contesting these northern wards have a lot of catching up to do.