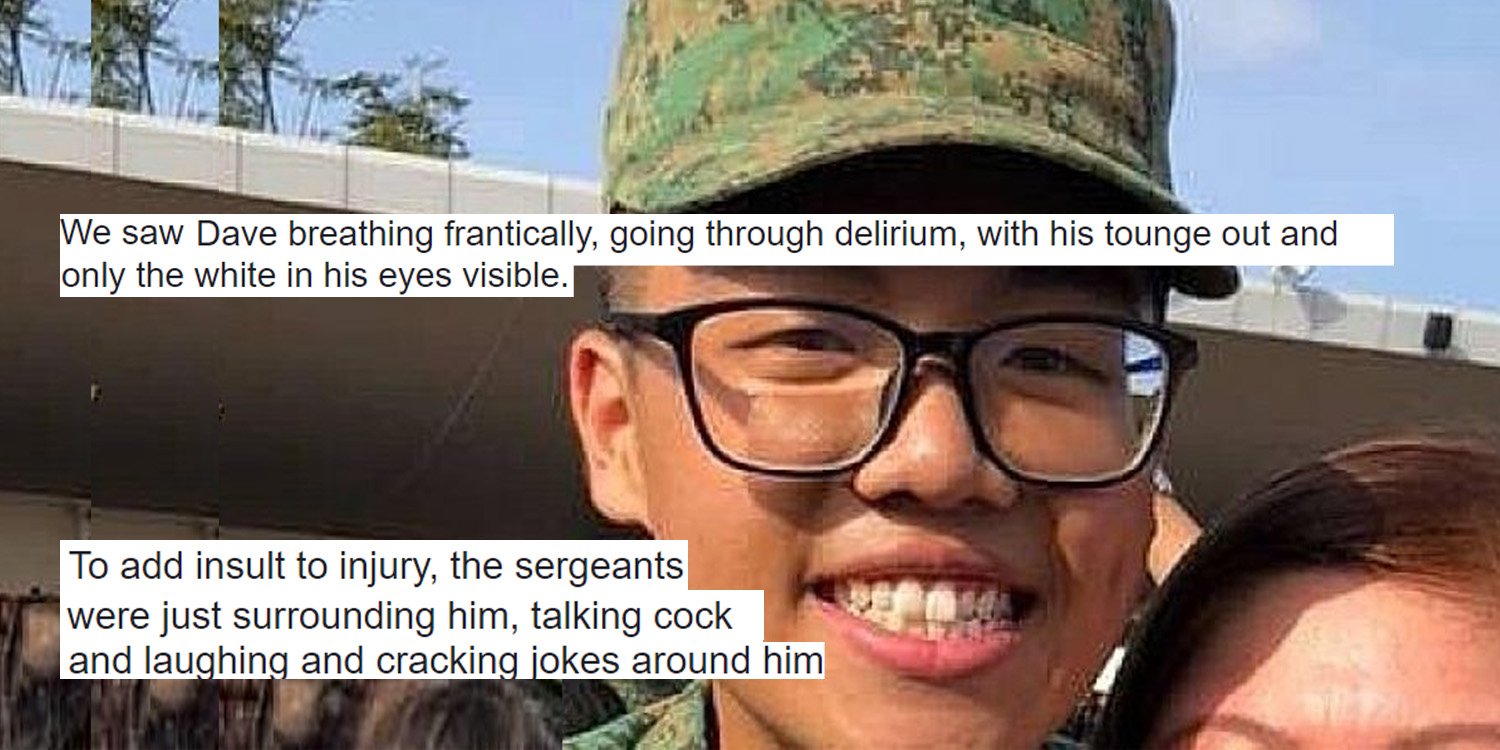 In Death, NSF Guardsman Trainee Continued To Serve By Donating His Corneas

On Monday (Apr 30), Private (PTE) Dave Lee Han Xuan passed away at Changi General Hospital, nearly two weeks after he was first warded there for heatstroke.

The 19-year-old was surrounded by family and friends, including his platoon mates.

And in death, PTE Lee continued to do good — his mother confirmed to TODAY that her son’s corneas had been donated, saying,

We have agreed to his organ donation but only his cornea can be donated. As PTE Lee was under the age of 21 at the time of his death, the Human Organ Transplant Act does not apply to him.

This means that organ donation is not compulsory.

Explaining why she did so anyway, Madam Jasmine Yeo said,

That’s because we really want him to contribute his best at his last moments. A proud thing that my son has done. A proud thing as a parent. And we really wish the person who have received it will continue to see the road.

Speaking about her son, Madam Yeo recalled the good times they shared together, saying,

He is really a very good boy. He is always very respectful. He will put in effort to help the family whenevrer he can and of course he will try his best as you all can see to achieve whatever task is given to him. One of you actually asked what is the most memorable thing we can remember having been with him. Is the hugs and kisses we always have whenever he comes back and whenever he moves in. And of course to a mother is the way we held hands together when we go shopping – something that we will never forget.

Differing accounts of what happened

While PTE Lee’s family grieves his death, questions remain about the circumstances around his untimely passing.

There are at least two accounts of what happened to PTE Lee.

The first, from the Singapore Armed Forces (SAF), paints an official picture of his plight.

The second was written by an unnamed soldier claiming to be from the 1st Battalion Singapore Guards, which was PTE Lee’s unit.

If true, his words are a chilling revelation of the “unofficial” NS experience.

It appears to have been written while PTE Lee was still alive but has since been taken down. It was shared again by Ms Cecilia Yeo, who claims to be PTE Lee’s aunt.

One of our fellow soldier(s) is currently in critical condition – possibly brain dead.

The author explains that he wants his post to deliver justice for PTE Lee and to ensure that “nothing gets hidden” during the investigation.

We summarise his post after the jump and compare it with the Army’s official statement.

1. Turnout the night before?

According to the soldier, the night before PTE Lee’s last march was far from restful.

Our entire recce platoon was turned out after lights out by our sergeants, forcing us to bear crawl to the Standard Obstacle Course (SOC) grounds at Bedok Camp.

A turnout is an activity where servicemen are called out of their bunks after hours, often used to promote discipline and camaraderie.

At the SOC grounds, the soldier said that they had to roll in the sand while their commanders poured water on them.

As a result, we did not have the adequate 7 hours of rest mandated.

Before sessions, dedicated safety officers have to ask participants if they had these 7 hours of rest, although a ‘culture of fear; means that many servicemen do not voice out.

So if this post is accurate, then PTE Lee and his fellow NSFs were less rested than recommended.

What the Army said: The official Army statement failed to mention any of this.

The soldiers set off on a fast march the next morning (18 Apr), when the temperature was around 27°C, according to this weather forecast site.

A fast march is basically a jog in full battle order, which can weigh up to 30kg.

The soldier recalls that PTE Dave was struggling to finish the 8km march,which is often carried out around the campsite.

He was dragged by senior commanders, forcing him to finish the fast march even though he was showing signs of extreme physical exhaustion.

What the Army said: Private (PTE) Lee Han Xuan Dave, 19, a Guardsman from the 1st Battalion Singapore Guards, was found to have displayed signs of heat injury at about 8.35am on 18 Apr 2018. PTE Lee had just completed an 8km fast march in Bedok Camp.

PTE Dave pressed on and made it to the end point, where he received his timing. Then, he collapsed, said the anonymous soldier.

We saw Dave breathing frantically, going through delirium, with his tongue out and only the white in his eyes visible. He was not articulate.

The writer then criticises his commanders for failing to recognise these signs of heat exhaustion, saying,

It was obvious that Dave was going through heat exhaustion or even heat stroke. Yet, they still acted as though it was nothing severe.

(They) did not follow the proper protocol for a soldier in heat exhaustion.

In a literal case of “adding insult to injury”, the writer alleges that the commanders mocked PTE Lee instead of helping him.

They were just surrounding him, talking cock and laughing and cracking jokes around him, obviously thinking the soldier is trying to keng.

And when it became clear that PTE Lee was not pretending, the writer says that the commanders failed to act adequately.

He says that they did not remove PTE Lee’s clothes or place ice packs at heat dissipation points on his body:

And the medic was blur, not knowing what to do. The safety officer was nowhere to be found…and commanders left (PTE Lee’s) body under the hot sun instead of bringing it to a shaded area. It took them almost 30 minutes to an hour before they even (stretchered) him away to the medical centre.

What the Army said: An SAF medic attended to PTE Lee immediately to bring down his core temperature. PTE Lee was evacuated to the camp’s Medical Centre where body cooling measures and treatment were continued by the SAF medical team. At 9.50am, PTE Lee arrived at Changi General Hospital (CGH), where he was warded in the Intensive Care Unit since 18 Apr 2018.

MINDEF sets up a Committee of Inquiry

Alas, PTE Lee succumbed to his injuries and passed away on Monday.

News of his death sparked an online furore, with many calling for the commanders to be punished.

Others expressed sympathy and worry for their own children serving NS.

On Tuesday (1 May) night, Brigadier-General Siew Kum Wong, the Army’s Chief of Staff – General Staff confirmed that a Committee of Inquiry (COI) would be set up.

The committee will be overseen by a senior civil servant from outside the Ministry of Defence.

Should there be training safety violations, the personnel responsible will be held accountable.

Such COIs are initiated after training-related deaths and do the following:

In 2013, a COI found that two commanders were not “directly responsible” for the death of another serviceman. Nevertheless, MINDEF did punish them, but no details were released on their punishment.

BG Siew also said that PTE Lee would be accorded the rank of Corporal First Class (CFC) posthumously and receive a military funeral.

In addition, he’ll be awarded the Guards and RECON military tabs, and the Guards beret he was training hard for.

MustShareNews would like to convey our condolences to PTE Lee’s family at this difficult time and hope that the COI will conduct a thorough and transparent investigation into PTE Lee’s death.