Must Share News – Independent News For Singaporeans
Home News NSF From 3 Guards Allegedly Not Allowed To Return Home By Superior... 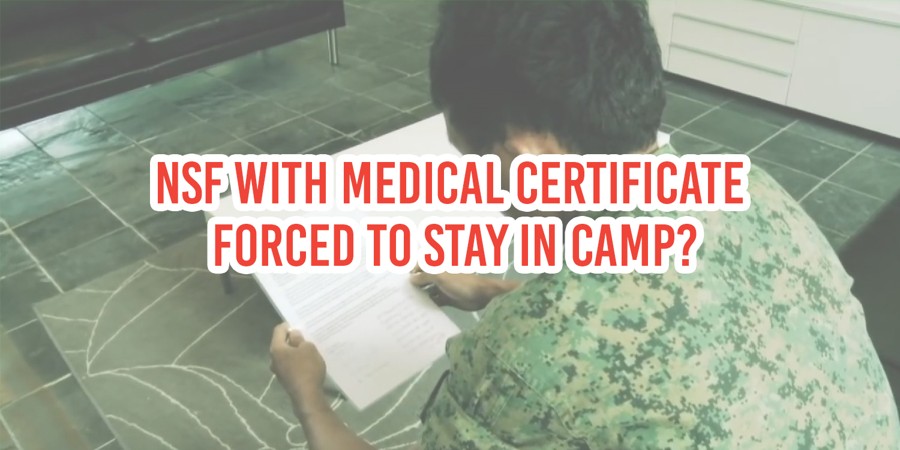 Given Official MC By MO, But Not Allowed To Go Home By Superiors

Ask any full-time national serviceman (NSF) and they’ll probably tell you that getting sick leave to go home is pretty difficult — yes, even if you’re a master chao keng.

Usually, sick leave is reserved for servicemen with severe or contagious conditions. In those cases, medical officers (MOs) would instruct the ill soldier to return home and not stay in camp.

However, this was not the initial case for one NSF as revealed on a Facebook post by MediaCorp actor Xavier Ong on 12 Feb.

In case you can’t see it, here’s the post again: 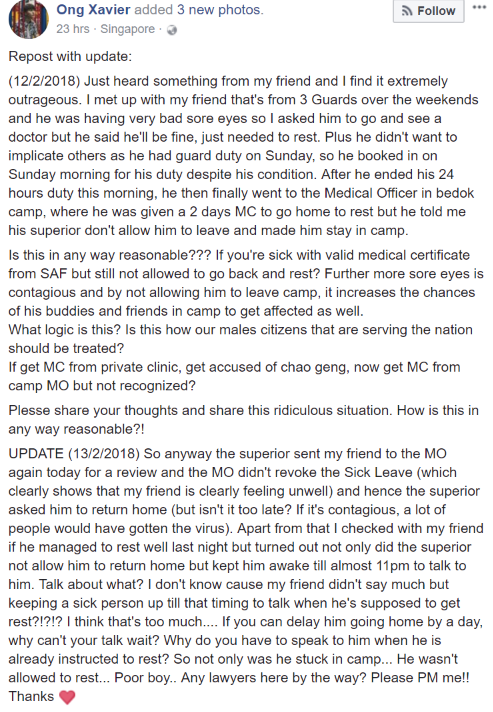 In the Facebook post, the said NSF appeared to have “very bad sore eyes”. Despite so, the NSF refused to visit a doctor in view of a guard duty he had on Sunday (11 Feb). He did not want to “implicate others” by having them cover for him.

After performing his guard duty, the soldier then decided to visit the MO in Bedok Camp to seek treatment for his infected eyes, which he then received 2 days worth of MC to recover at home.

This was when the problem began.

When given such an excuse by the MO to return home, NSFs would take the earliest opportunity to skedaddle on home prior to informing their superiors of their condition.

Except this time, his superior did not allow him to go home.

The superiors were even alleged to have disrupted the soldier’s in-camp rest by talking and keeping him up till 11pm.

In a later update dated 13 Feb, the post revealed that after a second check-up, the soldier’s MC remained valid and was finally allowed to return home.

However, this did not ease concerns.

(but isn’t it too late? If it’s contagious, a lot of people would have gotten the virus)

Questioning rationale of the superiors

The post then went on to question if the superiors were being unreasonable, especially since the “MC” was officially given out by a MO from the SAF itself:

Is this in any way reasonable??? If you’re sick with valid medical certificate from SAF but still not allowed to go back and rest?

Furthermore, considering how eye infections like conjunctivitis is contagious, the soldier puts his fellow mates at risk of contracting the infection by remaining in camp. Thus, again, questioning why his superiors continued to keep him from returning home:

Furthermore sore eyes is contagious and by not allowing him to leave camp, it increases the chances of his buddies and friends in camp to get affected as well.

On the flip side, comments on the Facebook post suggest looking at the situation more objectively — by considering other possible motives rather than assuming the superiors are just being unreasonable: 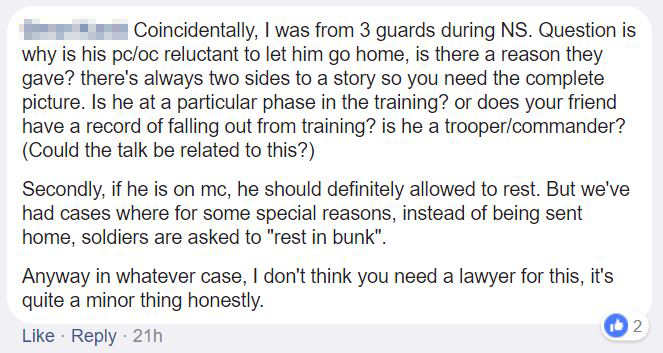 This comment also nods to how there have been many cases of soldiers consuming their MCs in camp. Instead of going home to rest, the soldiers were allowed to rest in their bunk and excused from any of their daily activities.

As there were many details not specified, the rational of the matter cannot fully be explained and therefore, we can only wait and see if MINDEF or the SAF make any response.

Hopefully, for the sake of the NSF and his friend, they won’t close both eyes on this one.