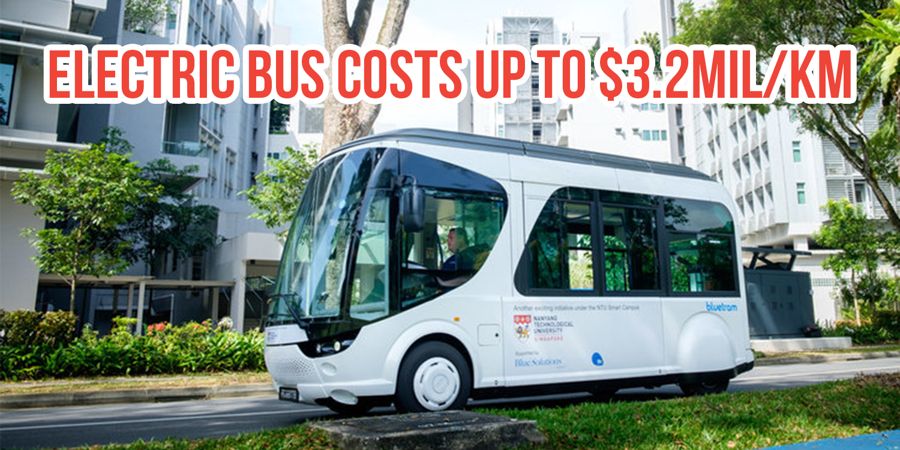 Nope, you did not read that wrong.

However, they seemed to glaze over the shuttle buses’ actual cost of operation and boy, was it a shocker.

Yahoo reported that the cost of operating the shuttle in NTU is estimated at $1.62 million to $3.23 million per kilometre.

We imagine that you’ll be reacting a little like this guy, or wondering if this is a typo.

However, the odds of two news sites getting the figures wrong are extremely low.

For now, let’s just roll with these estimated costs and try to investigate why an electric shuttle bus will cost literal millions to operate.

What else should I know about this bus?

Here’s a quick infographic on the impressive stats this 6-meter long electric bus is expected to clock. The new shuttle buses are expected to seat 22 riders, and travel 2000m after a 20 second charge.

They are also supposed to be 10 times cheaper than a normal tram, as they do not require the installation of rails or cables.

Bluebus shuttles are expected to be available for students to ride on come July, after trials are completed.

Going by the free-to-ride shuttle buses in NTU now, these new shuttles will probably be free as well.

Where did this vehicle come from?

The vehicle that is now prowling around the NTU campus was first launched in 2004 in Europe, by the Bolloré Group.

Which means this isn’t a recent invention. For almost 3 years, this model is already so last season.

What should we expect from similar buses elsewhere?

In April 2015, the Bluebus first arrived in Mulhouse, a city in eastern France.

A French blog shares about the unique features of the bus:

Bluebus…improv[es] the safety and maneuverability of the vehicle, as well as the accessibility of people with reduced mobility thanks to a very low floor.

So Bluebuses are safer, easier to board due to lower floors, and are more mobile.

Sounds good indeed. But is it worth the hefty price of $3.2 million per km?

Why is it so expensive?

The reason electric vehicles are so expensive lies mainly in the batteries.
Ford Motor Co. chief executive Alan Mulally explains that an all-electric vehicle would require a battery with a power output of 23 kilowatt hours.
The cost of the battery alone can come up to 70% of the price of the vehicle. This could possibly explain why the operational costs are so high.

Their exceptional life span, high energy density, safety and advanced engineering make LMP® batteries one of the best in the market.

We’re certain they also have one of the highest prices too.

Another plausible reason could be that our electric vehicle industry in Singapore is still in its infancy, so we’re unable to maximise all economies of scale.

So, why electric buses?

For the same reason, electric shuttle buses can also implemented quickly as compared to trams.

Best of all, electric buses can drive into buildings and drop us right inside the lobby.

Perfect for all the lazy folks who wish to save the trouble of walking a few extra steps.

Yeah, we agree. We’ll just have to wait for an official explanation from NTU for this.

To be fair, we don’t know the actual operating costs per kilometre of public buses in Singapore as the information is not freely available to us.

Also, the costs of operating a shuttle bus, would include the driver’s wage, maintenance of the bus, and the fast-charging technology at every bus stop.

Then again, taking into account cost savings from petrol and rail maintenance, we don’t see how it can ever total up to a whopping $3.2 million per km.

Since this question remains unsolved, and we invite you to join the discussion on why it could be this expensive.

Ask your friends to estimate the price, and surprise them with this answer.