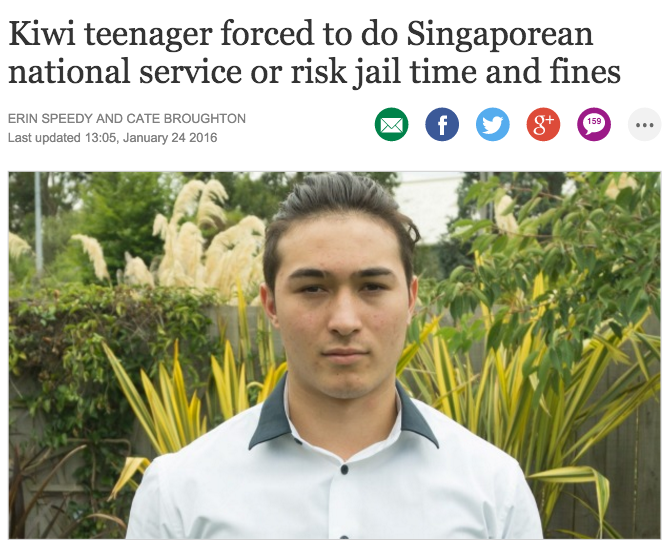 This Kiwi thinks that he is a special snowflake and wants to escape serving National Service (NS).

19-year-old Singapore-born Brandon Smith, currently lives in New Zealand, and might face charges for defaulting NS if he does not turn up for a pre-medical NS check up.

His mother is a Singaporean with New Zealand Permanent Resident (PR) status, while his father is a New Zealander who serves in the Air Force.

This Kiwi wants to avoid NS as he thinks it is “difficult and pointless”.

I don’t see the point of it, really. It’s sort of a waste of time to go there and just come back anyway.

His other excuses for not wanting to serve NS?

So… NS being “difficult and pointless” is a valid reason not to enlist? #seemslegit

His parents basically got him into this predicament

Mind you, Brandon holds dual citizenship, and must therefore comply with the Enlistment Act.

His parents are also partly to blame for all the drama.

Why wait till he was called up to serve NS (18 years old) to take action and create such a huge ruckus about their son having to serve NS?

Reminds us of a certain animal (not kiwi).

According to stuff.co.nz, Brandon’s father, Shane has been corresponding with Members of Parliament (MP) to help his son avoid NS. However, he was rejected deferment. Shane said:

Absolutely no one would accommodate us. It was always the same answer; ‘we regret to inform you that Brandon has to serve National Service’.

The question is, why was his deferment rejected?

The article by stuff.co.nz  made no mention of Brandon renouncing his citizenship before he went to New Zealand. This means, his parents might not have followed procedures to avoid NS.

According to the Ministry of Defence this are the conditions to not serve NS:

Only those who have emigrated at a young age and have not enjoyed substantial socio-economic benefits are allowed to renounce their citizenship without serving National Service.

Thus, Brandon’s parents could have followed these 2 methods to prevent him from enlisting:

1. They could have renounced his Singaporean citizenship and made him a Kiwi before he turned 11  — which should have been easy, given that he went to New Zealand when he was 8 years old.

2. Alternatively, they shouldn’t have made him a Singaporean citizen in the first place.

Looks like stuff.co.nz missed this point, or left this detail out.

These people are throwing their weight around and trying as hard as hell to get special treatment.

Long story short, they got the help of a Kiwi MP to appeal to New Zealand’s Foreign Minister Murray McCully who decided to help them.

Brandon missed the train to avoid NS, for whatever reason.

Thus, as a Singaporean citizen, he is still obliged to served NS or has to face the consequences.

To sum up, there are 2 routes he can take:

Featured image via stuff.co.nz
With reference to stuff.co.nz, The Straits Times