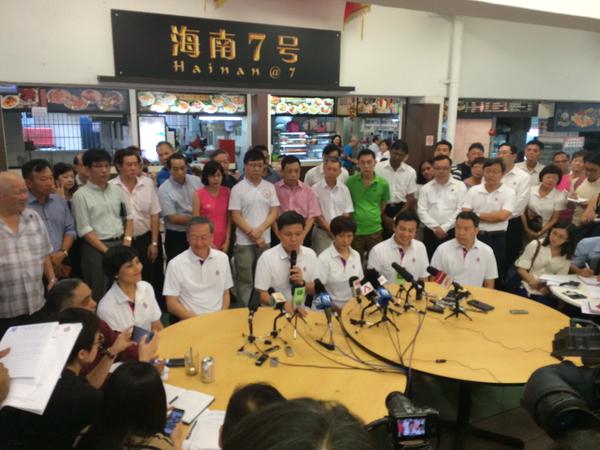 Keeping with the heartland theme, the unveiling was done at a coffeeshop in Tanjong Pagar Plaza. This will be the first time that the Tanjong Pagar team will not feature former Prime Minister (PM) Lee Kuan Yew.

With the mainstream media’s coverage on the issue, we decide to take a look at the PAP’s new team from a different angle.

Here are some of the things MustShareNews noticed about PAP’s team. 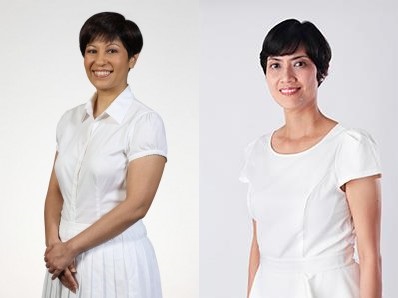 Maybe its the hair.

Or is it the smile?

We are still pretty convinced that the two female PAP candidates from Tanjong Pagar — Indranee Rajah and Joan Pereira — are related somehow.

Indranee Rajah has been a Member of Parliament (MP) since 2001 and is the current Senior Minister of State, Ministry of Law and ministry of Education. Joan Pereira, meanwhile, is an Assistant General Manager at Temasek Cares. Over the past 8 years, she has implemented the Wellness Programme in all 87 constituencies.

2. Joan is a little handsy

Well, if her introductory video is anything to go by, we can expect a lot of hand gestures.

3. The Army and Police connection

4. Chan Chun Sing knows he has big shoes to fill

PAP have won Tanjong Pagar GRC with walkover victories in every election since its creation in 1991. Given that this will be the first time an opposition party is contesting Tanjong Pagar, coupled with the fact that this will be the first election since the passing of former GRC leader, PAP will not want to lose this constituency to the opposition.

He may only be in his second general election, but Chan Chun Sing certainly knows that a lot rests on his shoulders. Concurrently holding the position of Secretary-General of the National Trades Union Congress (NTUC), he is seen as the new leader of the team.

5. Melvin Yong or Joan Pereira could be a minister soon

Some may spot a trend when it comes to Tanjong Pagar GRC members and ministerial posts.

Current Minister for Trade and Industry, Lim Hng Kiang was first elected to Parliament as a Member of Parliament (MP) for Tanjong Pagar GRC in 1991.

Minister for Manpower, Lim Swee Say was in the team when it won the 1997 general election uncontested.

The trend continues with current Minister for National Development, Khaw Boon Wan being elected in 2001, and out-going Minister for Transport, Lui Tuck Yew joining the team in 2006.

This trend may be due to the fact that Tanjong Pagar was led previously led by Lee Kuan Yew, and his guidance may have played a role in their movement up the ladder.

The PAP had announced that they will be unveiling all their candidates before the National Day Rally on Aug 23. With the date rapidly approaching, we are certain to see some exciting unveilings in the coming days.