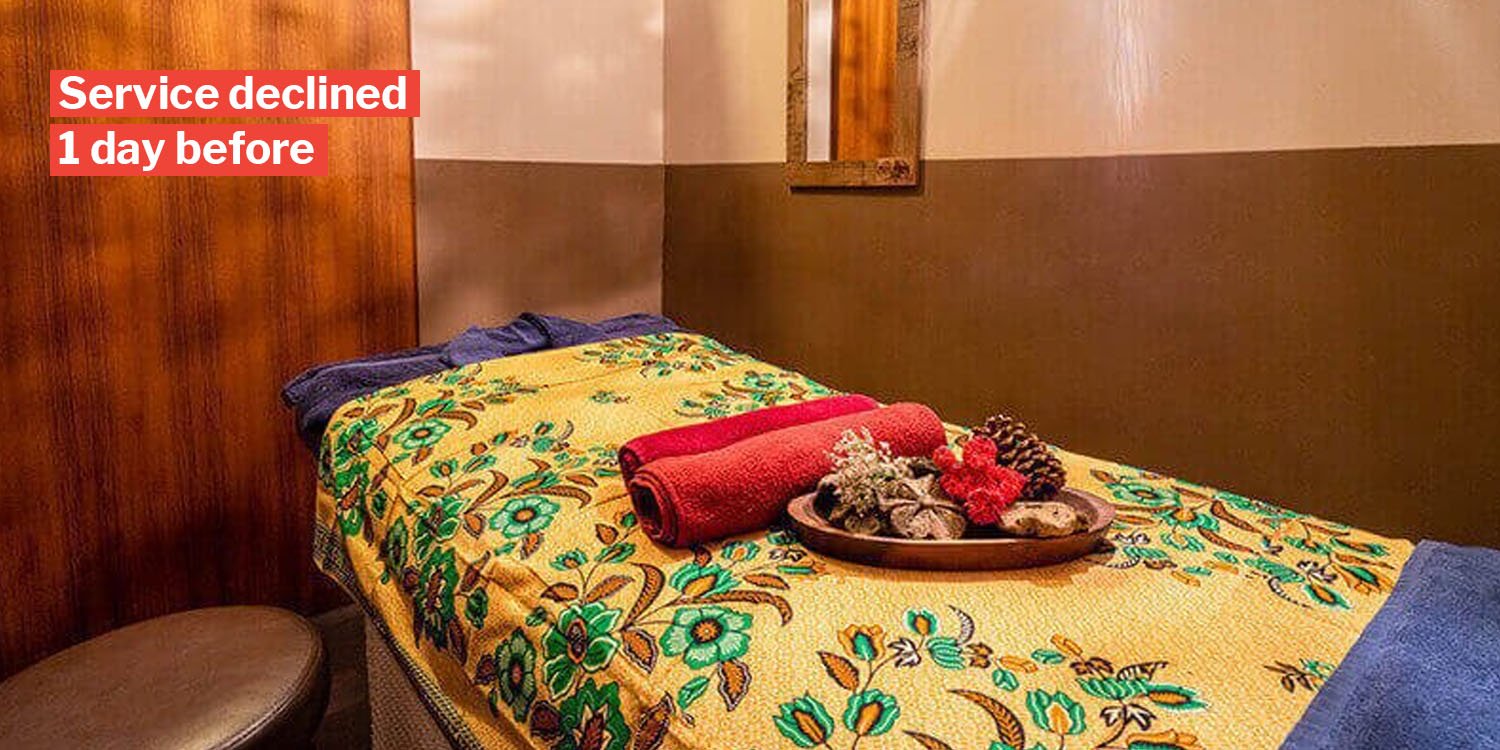 Beauty Spa In Orchard Allegedly Doesn’t Accept Helper, Even Though Voucher Has Been Paid For

UPDATE (3.45pm): BelleCare spa has clarified their side of the story, saying that they simply require all domestic helpers to produce consent letters from employers for verification purposes.

Going for facial at a spa should be a relaxing experience. A family in Singapore thought it was the best form of reward for their domestic helper, to thank her for her hard work.

So, they happily bought a voucher via lifestyle app Fave.

The experience, unfortunately, turned sour before it even began, as the beauty spa allegedly told them they don’t accept domestic helpers as customers.

Dismayed, one of the family members took to Instagram Stories to retell the tale. The incident was later shared by a friend of the family on Reddit on Saturday (3 Oct).

The OP shared that their friend’s aunt bought vouchers for a 3-hour spa package via Fave in September.

The transaction was successful, so they called the beauty spa BelleCare to make an appointment. 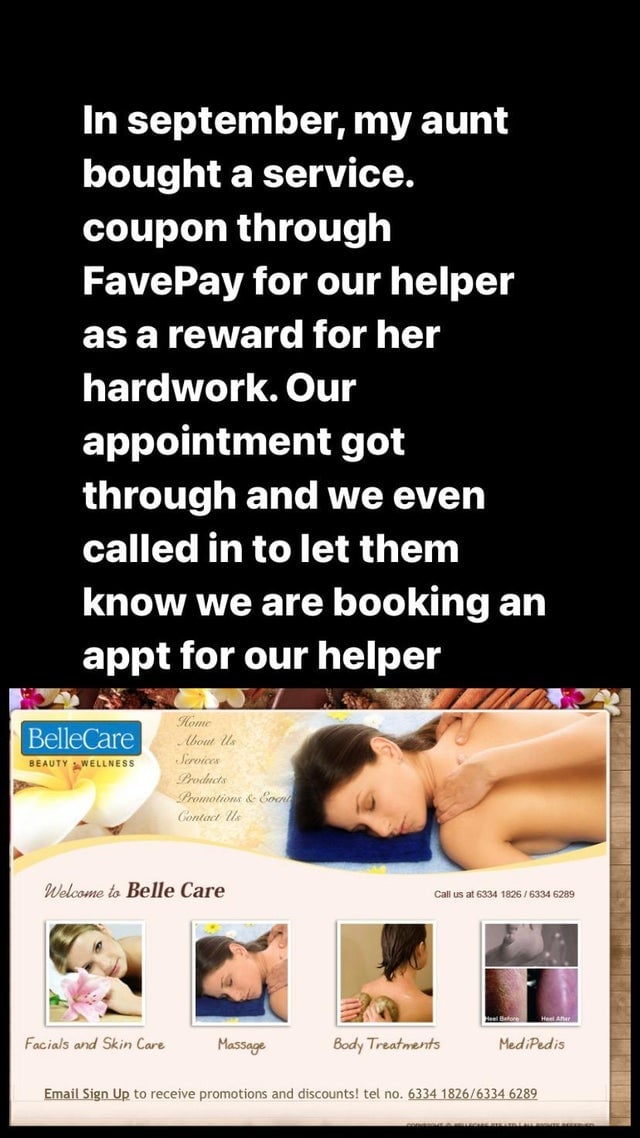 One month later, she found that her helper wasn’t eligible for the package, or any service from the beauty spa, for that matter.

A customer service staff from the beauty spa allegedly called to inform a day before their appointment, that they won’t be accepting work pass holders and domestic helpers. 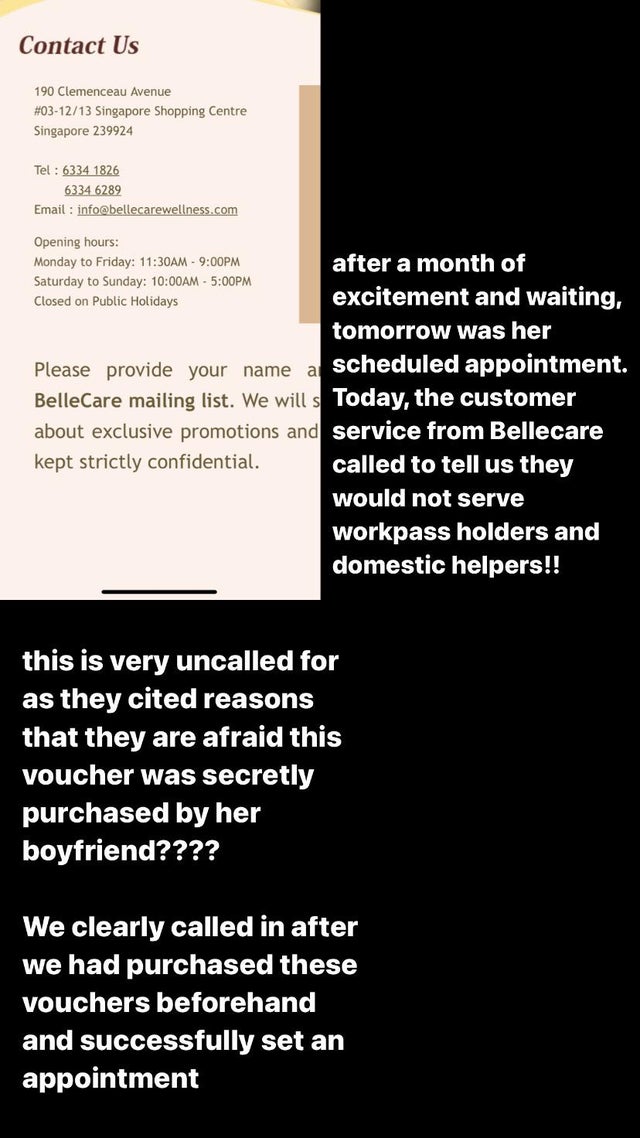 The staff reportedly explained that they were afraid the voucher was “secretly purchased by her boyfriend.”

Saying this was uncalled for, the OP’s friend clarified that she had bought the voucher, and that the appointment was set a month ago.

Domestic workers not allowed despite T&Cs

Confused, the OP’s friend recalled reading a line in the spa’s terms and conditions that says, “Valid only for Singaporeans, Singapore PR, EP, SP and WP holders.” 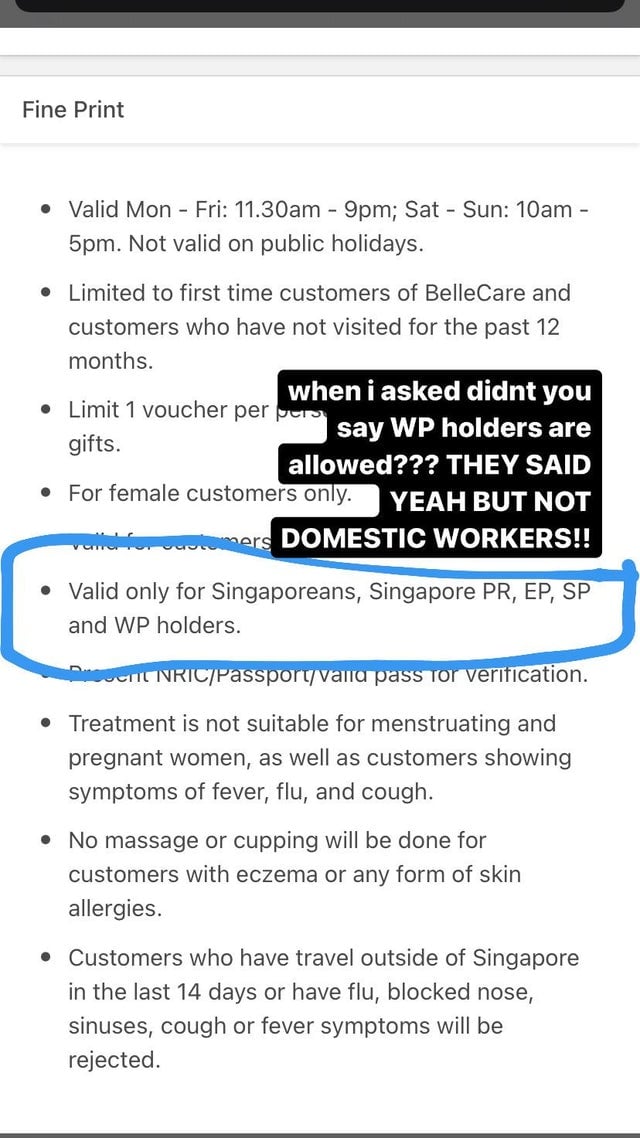 To which, the staff apparently “agreed” the spa should have made it clear in writing that domestic workers weren’t allowed. 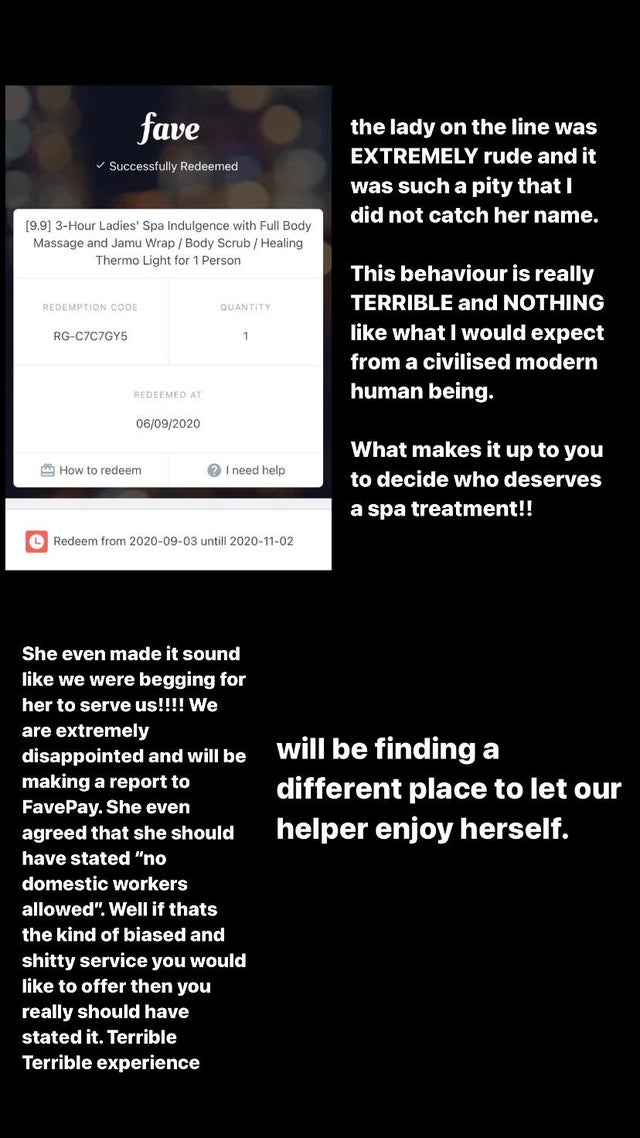 The conversation was an unpleasant one. But it seems that the family of the OP’s friend decided it was best to look for a different spa instead.

A number of Redditors were equally dismayed after reading about the incident.

One of them said it was unacceptable to “treat domestic helpers like lesser beings”.

This was because they are far away from their families trying to earn a living. “The least we can do is to treat them fairly and give them the basic respect we give to any other Singaporean.”

One Redditor was confused, saying that if the service was paid for, it’s only right that the staff served them. “It’s not like they came in without bathing or in dirty clothing.”

Equal treatment regardless of background

As this remains a one-sided story, we have reached out to BelleCare for comment, and will update the story when they’ve responded.

It’s 2020, but unfortunately, such discriminatory treatment – if true – is undeserving.

Regardless of citizenship or background, non-citizens are doing their part to serve the Singaporean society.

We believe equal treatment should and can be afforded by everyone. After all, in the words of President Halimah Yaacob herself, “discrimination in any form and against anyone has no place at all in our society”.