A series of unfortunate events nearing this Christmas

*Disclaimer: This article has been edited to include more incidents in points 8 and 9.

Christmas is a season for joy and celebration. For many, Orchard Road is the symbol of Christmas in Singapore, for without its dazzling and kaleidoscopic lights, Christmas would seem incomplete.

However, the festive mood of the magical season has been dampened by Orchard Road’s share of mishaps.

These misfortunes include Christmas decorations bursting into flames, things falling from above, and a blackout which disrupted both shoppers and storeowners plans.

MustShareNews.com examines the 9 incidents thus far that have defined The Curse of Orchard.

The Orchard Curse started off with the sacrifice of a Christmas tree.

Outside Knightsbridge mall, near the Abercrombie and Fitch store, a Christmas tree went up in flames. In an announcement, Singapore Civil Defense Force (SCDF) said that this was due to an electrical fault after an investigation.

But was the fire not just a sign of things to come?

Look at the majestic inferno of hell filmed by our netizens.

Sure, this first incident might have been a coincidence, but wait, there’s more!

The second installation of The Orchard Curse came in the form of Christmas lighting catching fire. Looks like the curse had a taste of the Christmas tree, and decided to consume accompanying decorations this time.

According to onlookers, the Christmas lights started emitting smoke before bursting into flames.

The SCDF then sent a fire engine and a red rhino to extinguish the fire.

Looks like Orchard Road was brightly lit-up this Christmas.

While the previous incidents somehow didn’t incur any casualties, the next case unfortunately claimed a victim.

The curse is not only going after Christmas trees and decoration, but also took a human life.

At approximately 9.50 pm, a man fell from the 5th storey of Wisma Atria. Shoppers heard a loud thud and were greeted with a ghastly sight.

Despite having a doctor and nurse at the scene performing Cardiopulmonary Resuscitation (CPR) and the SCDF arriving shortly after, the man has succumbed to his injuries .

Here are some photos of the gory images:

Warning: disturbing images up ahead 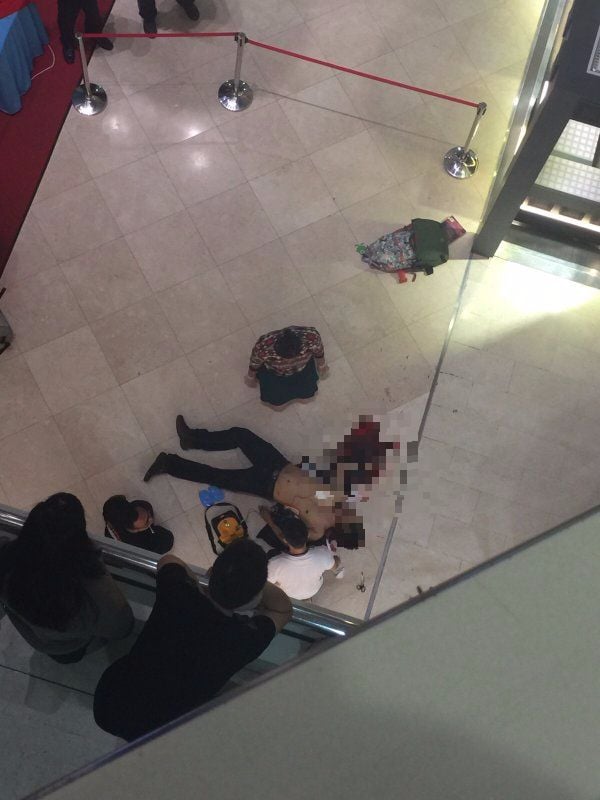 The Curse is picking up pace, and opted for a Modus Operandi of making things fall and collapse.

Near Orchard Central, a tree fell onto Orchard Road and blocked the traffic in at least one lane. Fortunately, the curse missed its mark and nobody was injured.

Well, looks like the curse has found a pattern. If burning Christmas trees and Christmas lights won’t daunt people from visiting Orchard Road, perhaps a falling slab of concrete would scare them away.

Two women had a harrowing close brush with danger with a falling slab of concrete from an overhead bridge near Orchard Plaza.

According to a witness, minutes after the two women left the area, a loud thud was heard across the road.

Are these events starting to sound familiar?

We are starting to see a pattern now — it seems like gravity and the curse are good friends.

This time, however, the Curse opted to dislodge the driveway roof of Hilton Hotel, located next to Far East Shopping Centre.

An eyewitness who said that there was a loud bang, added:

You look at the damage, you can imagine how loud the sound was. The traffic was not heavy and there were no screams when the ceiling collapsed

The SCDF received a call at 2.55pm and 4 people — one man, two women, and a child — were taken to Tan Tock Seng Hospital. Fortunately, no one was trapped under the rubble.

Having read all these incidents, we’re having some trouble believing these accidents are just mere coincidence. After all, these occurrences happened on Orchard Road, and within 13 days. 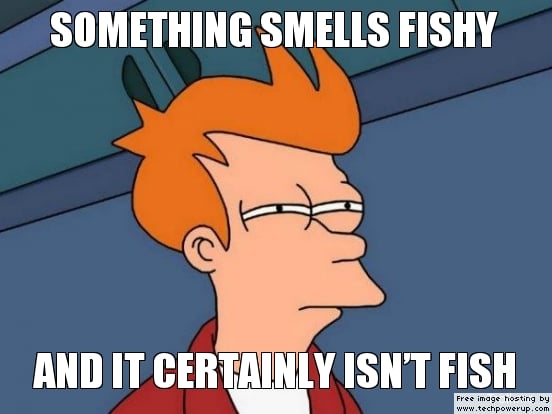 Well, The Orchard Curse’s warnings were not heeded and decided to strike at Orchard Central.

We’ve gone through eerily similar accidents so far, with cases of fire and gravity working in cahoots with the Curse. Perhaps this last incident serves as a final warning that the force behind The Orchard Curse would stop at no costs to snuff out the light and joy of Christmas.

The power outage occurred at 2pm and was caused by water seeping in from the heavy downpour. Many businesses, including 50 shops in the East wing were adversely affected by the blackout. Some reported loss in earnings and even perishable products such as food. 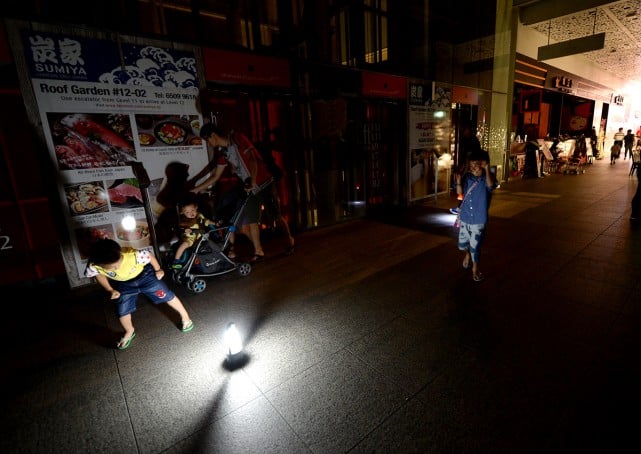 What do the people think?

Some people believe that Orchard Road is actually cursed. Netizens have even drawn up a the place in which incidents have occurred to help identify this series of unfortunate events.

did someone curse Orchard Road? in the spans of days, two burning christmas trees, one guy fell several storeys at Wisma. what's next?!?!

The curse upon Orchard Road pic.twitter.com/D2kPJ8cc6p

There was shattered glass falling at 51 Cuppage road, which used to be Starhub Centre.

How much more predictable can this curse get?

Maybe it is another sign about the shattered hopes and dreams of Christmas.

Lucky Plaza (or unlucky plaza) caught fire on Friday, 18 Dec. According to witnesses,  the fire started from the second floor, in the kitchen of Indonesian restaurant Warung Surabaya.

Looks like someone, or something, is cooking up a storm in there.

The SCDF was alerted and arrived at the scene at 1.10pm to put out the fire. Shoppers were told to evacuate the building and a crowd formed outside Lucky Plaza.

Water used to combat the fire also seeped through the floors and managed to soak up carpets, and destroy store owners’ belongings, resulting in losses.

The curse of Orchard Road must be having a field day and on fire, after wrecking up this huge mess.

Meanwhile, many netizens have started to attribute unlucky plaza’s fire to the curse.

And now… Fire broke out at Lucky Plaza. The curse of Orchard Road is real?

Others have begun to suspect if Orchard Road is jinxed.

Some have even started calling Orchard Road the new Jurong East Mall (JEM).

Is Orchard Road the new Jem?: When I read about a fire at a shopping centre on Friday, I thought it was long o… https://t.co/rFSzSXuanY

Fires, blackout, falling broken glass, a fallen tree as well as one death — it appears to a classic curse.

Perhaps compared to The Curse of Orchard Road, JEM’s incidents are just trivial.

The curse is also starting to gain a reputation for making things go wrong.

#throwback to Murphy’s law: Anything that can go wrong, will go wrong.

Maybe it is time to start #OrchardRoadcurse.  We do not believe that these incidents were mere coincidences. However, conditions such as the downpour also have a huge role to play in perpetuating such events to occur.