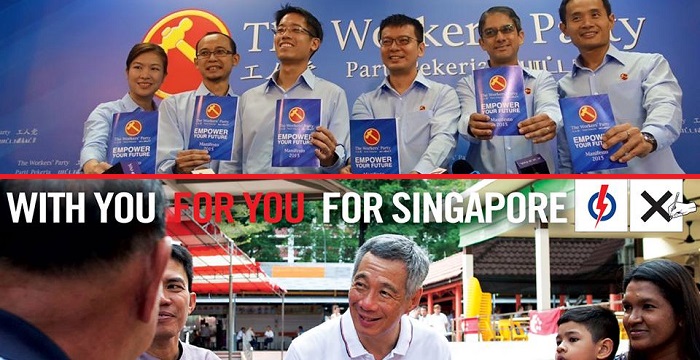 And on Saturday (29 Aug), the People’s Action Party (PAP) and Workers’ Party (WP) took the opportunity to release their manifestos, outlining the grand plans they have for Singapore beyond GE2015.

PAP took the opportunity to re-introduce their new candidates and occupied time with rhetoric-filled speeches — a tactic which seemed odd, given the party were technically speaking to themselves. 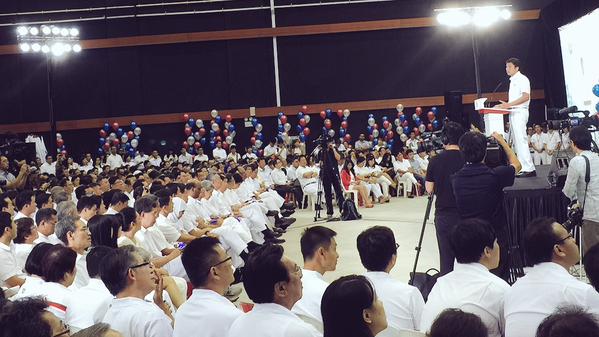 Meanwhile, WP stuck to the script and kept things short, keeping the entire release event within 2 hours, and manifesto slogan within 3 words — Empower Your Future. According to their website, Infinite Studios produces film, TV, and digital media content. They also “work closely with the Media Development Authority and the Economic Development Board to attract international projects into Singapore”.

Infinite Studios own two rather spacious sound stages in Singapore.

WP headquarters, on the other hand, is a more humble location.

Located in the middle of Jalan Besar, the WP headquarters is just stone’s throw away from the massively popular Swee Choon Dim Sum.

PAP left it to the party’s big man to speak, while WP’s team of 6 contained only one person who has a spot in Parliament House — Non-Constituency Member of Parliament (NCMP) Gerald Giam.

WP’s strategy was simple — the people who put the manifesto together would be the ones who discussed it in detail.

PAP‘s delivery of their manifesto was preceded with Malay, then Mandarin speeches highlighting global and local issues that Singaporeans need to care about.

In his English speech, PM Lee also spoke of AHPETC,

PM says of WP-run AHPETC: "the one place they were given responsibility, they have failed voters." #GE2015

and relied on a video to bring across the manifesto slogan, “With You, For You, For Singapore”.

We scanned through the Twitter accounts of Singapolitics and PAP, who were both live-tweeting the event, but found no quotes of direct actions or plans outlined in the PAP manifesto.

Conversely, WP spoke almost exclusively of plans and details within their 48-page manifesto.

We propose a National Minimum Wage that is pegged to a percentage of the Average Household Expenditure on Basic Needs. #GE2015 #wpsg

ON TRANSPORT: WP proposes all public transport assets be nationalised, but with the services contracted out. #GE2015

We took at look at both manifestos, and here are some of the major things we took away. 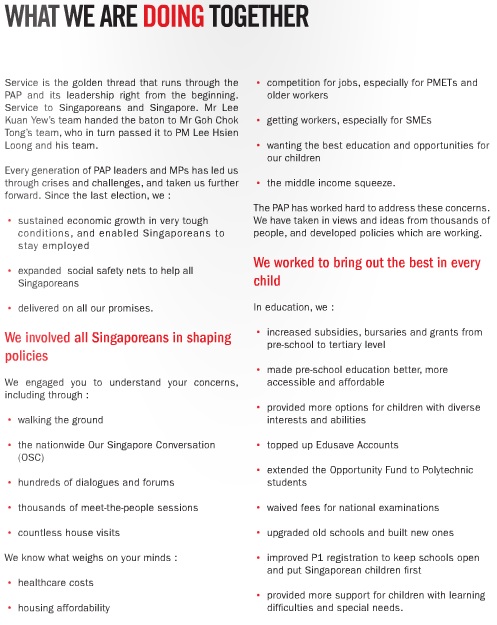 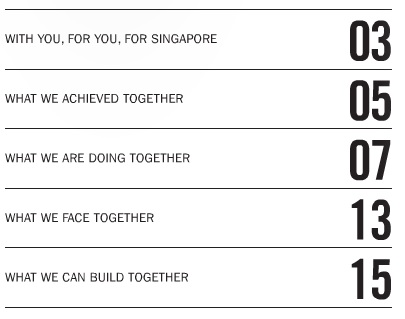 All in all, the PAP manifesto was much like its unveiling — filled with rhetoric, delivered in national languages, and very polished. Compared to PAP’s manifesto, WP’s product was no-frills, spelt out specific proposed changes, and opted for logic over emotion.

Who won? Who’s next?

This probably goes without saying, but both manifestos are very different from each other. A team of designers clearly worked on PAP’s manifesto, while a team of young Singaporeans, led by a sociologist, worked on alternative plans for WP’s manifesto.

But really, how many Singaporeans read party manifestos before voting? Singaporeans are busy and pragmatic, so who knows if these documents will swing votes either way.

For all we know, Singaporeans will just vote for whoever carries the more babies over the 9 day hustings period.