Foodies were thrilled when it was announced in 2015 that NTUC Foodfare would be opening Pasir Ris Central’s first hawker centre, supposedly in the first half of 2017.

However, things went surprisingly quiet once the hype died down, with no information on an exact date the hawker centre was set to open. The first half of 2017 came and went, and oddly enough, there was no mention of an opening day, or even delays. Then Sept 2017 came, and excitement started to grow again as The Straits Times spilled some juicy info about the hawker centre, including the opening date.

They reported that the hawker centre was finally set to open in November, with a hipster vibe meant to cater to millennials. ST even detailed that each hawker stall on the first floor will have 2 budget meal options for only $2.80, as well as healthier meals below 500 calories each.

Not only that, the second floor would be called the Fareground. The space was supposed to look like a “hipster food market” and would be home to various events hosted on location, like musical performances and craft markets. And then November came and went, quietly, with the hipster hawker centre clearly forgotten.

Fast forward to 11 Dec, and NTUC finally emerged from the shadows of silence, only to disappoint again by providing barely any information on when the hawker centre is actually going to open.

Source
Translation: We don’t know when it’s going to open either so hang on tight and stay excited

Hangry fans starting to catch on

Well, it looks like hangry fans are getting impatient with NTUC Foodfare, too.

This commenter on NTUC Foodfare’s Facebook page suggests that the delays are due to a lack of operators because the rent is too high: It’s all speculation at this point, considering there is literally no news on what’s going on with the hawker centre.

Meanwhile, this netizen just wants her mookata. We can totally relate. 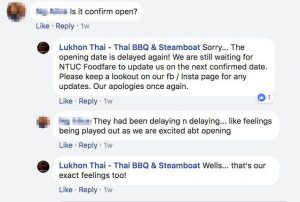 If you thought NTUC Foodfare’s announcement from 11 December was the last one and that your hipster hawker dreams were finally coming true, turns out, it’s still not open. Urgh.

In true fashion, NTUC Foodfare has been completely silent on the matter ever since. However, Lukhon Thai, a stall that was meant to open at Pasir Ris Central Hawker Centre, has broken their silence.

Plot twist (well, not really) the opening of the hawker centre has been delayed again, and this time it’s been delayed until end December to mid January.

Also, Tasty Street, another stall supposed to open at the new hawker centre posted this picture on 17 Nov, seemingly confirming their opening on 6 Dec. Only to comment that their Pasir Ris outlet would “not be in operations until further notice” on 26 Dec.

Considering it’s already the end of December and there’s still no news, looks like it’ll be opening closer to January, if it even does then.

It’s just a matter of time Ideally, NTUC Foodfare will soon announce what’s actually been going on and when we it’s going to open.

Delays are so hard to bear, especially when it comes to food. Considering there isn’t even a confirmed opening day, the wait is even harder to endure.