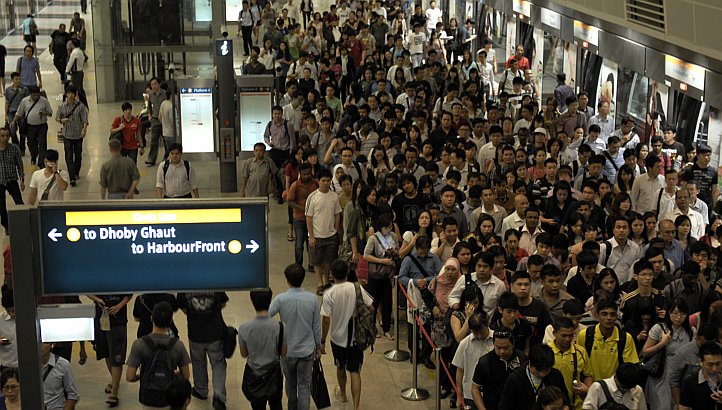 Wake up in the morning, feeling like P-atricia Mok

On a bright sunny morning, Xiao Ming goes to the market.

Except Xiao Ming now works at Raffles Place. And he lives in Jurong East. And the MRT is the only way to get to the office.

To the nameless warriors who spend every morning on the train towards town, we feel you. This is for all of us:

1. You finally get out of bed after hitting the snooze button. Because, what could be better than starting the day with some procrastination.

2. But you get in the shower, convinced that nothing can ruin your day. Not even the transport to work.

3. You mentally prepare yourself for the journey

4. But maybe spend a bit too long getting ready

5. So you run out at lightning speed to catch the MRT

6. But when you get to the MRT station and see the morning crowd..

7. The idiot in front of you at the gantry forgot to top up his EZ-link card

8. When your own EZ-link card gets declined

9. You finally get to the platform and see the beelines forming at the doors

10. And then someone tries to cut the line

11. You look at the board and it says that the next train will arrive in four minutes. You try not to lose it.

12. The do-not-board train arrives. It’s okay, I’ve been cheated on before.

13. And then, the actual train finally arrives and what was an orderly queue turns into a stampede

14. When you finally make it through the train doors

15. But all the handrails are taken

16. You stand and silently judge everyone around you

17. And try not to fall asleep standing

18. But then something wakes you up. There is a reason why people should not speak in the morning, especially those with morning breath.

19. When someone sitting in the middle seat tries to get up, push and wiggle his way across long before his stop

20. When the passenger sitting in front of you alights, and you think you finally get a chance to sit. But no. Angry-bird aunty swoops in from god-knows-where.

21. But its okay, something else catches your eye. It’s a hot guy at the end of the cabin.

22. You try to make eye-contact

23. But then you remember that you look like this

24. So you stare blankly at your phone like it is the most divine creation since God made pizza

26. And then you realise that you’ll have to do this all over again tomorrow.