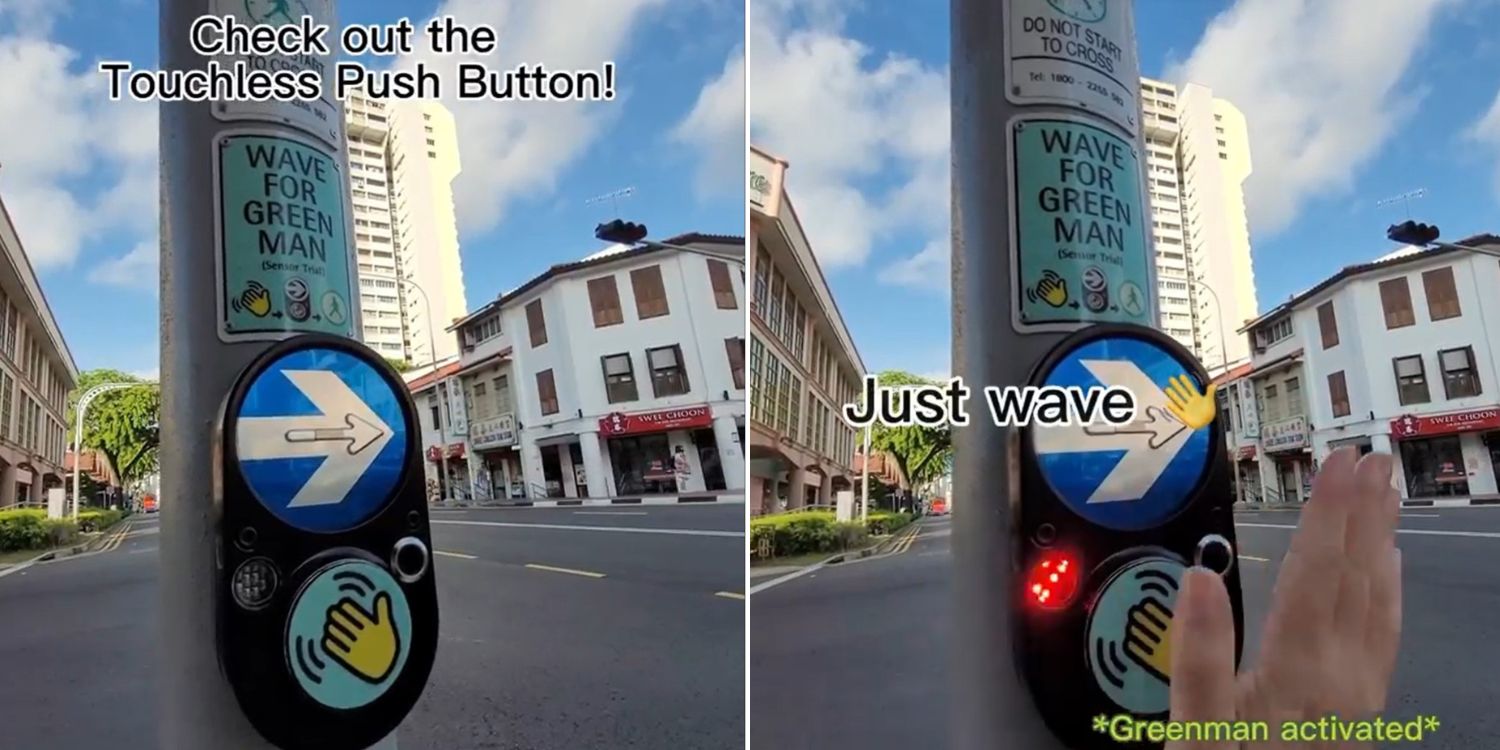 There will be no change to waiting and crossing times at these four locations.

Almost all Singaporean pedestrians will have seen and used the big buttons installed at road crossings to summon the “Green Man” so they can cross the road legally.

However, some of us may be guilty of pressing the button repeatedly when we get impatient during a long wait.

That’s one reason the Land Transport Authority (LTA) has introduced touchless buttons at four pedestrian crossings in Singapore so that the Green Man has contactless activation.

They will be there for six months as part of a trial.

In a Facebook post on Sunday (3 Jul) night, the LTA said the touchless buttons were progressively installed in July.

The four locations where they will operate are:

According to The Straits Times (ST), touchless buttons were installed at the crossings in Jalan Besar and Tampines Street 86 on Thursday (30 Jun). At Bukit Batok Street 32 and Yishun Street 21, the buttons can be used at new crossings there by the end of this month.

According to an instructional video posted by the LTA, the touchless buttons are easy to identify and use.

There will be a logo of a waving hand on the button and a message above saying “Wave For Green Man”.

All pedestrians need to do is wave their hand in front of the button, and a red light will start blinking, and continue flashing.

That means that the Green Man has been activated.

As with normal crossings, once the Green Man appears, it’s safe to cross.

LTA said there would be no change to waiting and crossing times at these four locations.

The purpose of installing these touchless buttons is to reduce wear and tear.

LTA told ST that the push buttons currently used at traffic lights are open to improper use, for example, by “repeated triggering”.

This is when pedestrians keep pressing the button, hoping in vain that the Green Man will appear more quickly — even though that’s not the case.

Doing so will actually cause buttons to wear out faster and cut their expected lifespan of 15 to 20 years.

When worn out, the buttons may not summon the Green Man or get stuck and keep on summoning him.

That means they’ll need more maintenance, as there are more than 11,000 buttons in Singapore, which will take time.

During the first wave of Covid-19, some Singaporeans developed a fear of touching common items in public like lift buttons and door handles.

Thus, touchless buttons will alleviate some of that fear, as it reduces the transmission of Covid-19 and other diseases.

For this reason, a similar trial was conducted in Australia, receiving positive feedback, LTA told ST.

The touchless buttons used in Australia cost S$305 (A$320), about S$95 (A$100) more than the push buttons, reported the Australian Broadcasting Corporation (ABC).

This will help them determine whether they work just as well or better than conventional buttons.

LTA pointed out that the touchless buttons at the four locations are modified from regular buttons to keep costs low.

If the trial succeeds, LTA may come up with new forms.

Hope the trial will succeed

Due to the pandemic, contactless systems are gaining popularity and more may be in use soon enough.

As the touchless buttons seem to have many benefits, hopefully, the trial will be successful so the system can be rolled out in time to come.

Just as long as another contactless system of using “The Hand” to cross the road doesn’t catch on, we think pedestrians will take to it.