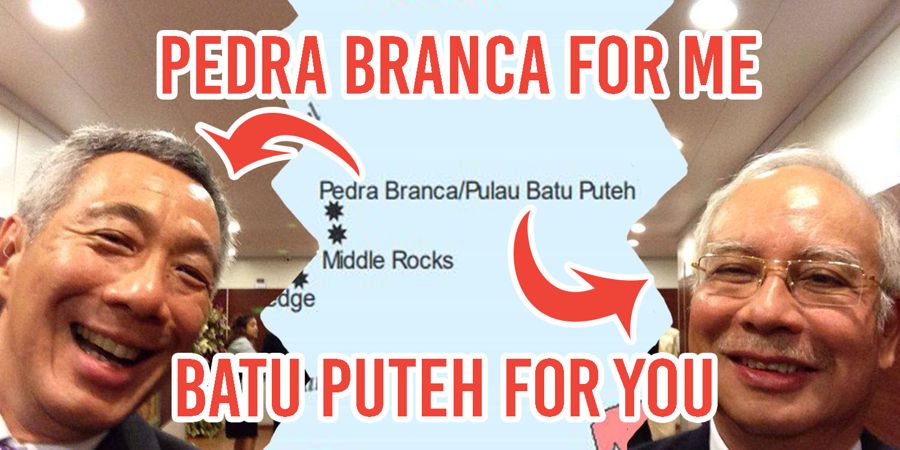 Neighbours who live in glass houses shouldn’t throw stones. Unlike most neighbours, Malaysia and Singapore have actually been fighting over piles of stones for almost 37 years.

His remarks have since triggered the youth wing of United Malays National Organisation (Umno) in Malaysia so much, they’ve even accused PM Lee of “belittling” Malaysia’s appeal bids. They also claim that PM Lee’s remarks are an “irresponsible accusation” which could damage the good ties between both countries. 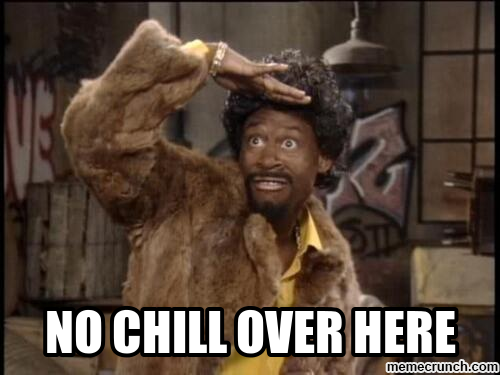 The lack of chill aside, here’s why PM Lee’s remarks are probably not “belittling” or an “irresponsible accusation” that will destroy Malaysia and Singapore’s close-knit ties.

Let’s take a closer look at PM Lee’s full remarks about the matter:

Take Pedra Branca for example. It is an old subject. We thought the issue was settled permanently long ago. Because in 2008, the International Court of Justice (ICJ), awarded the Pedra Branca to Singapore. – PM Lee Hsien Loong

For the uninitiated, Pedra Branca or “white rock” is an island made of a small outcrop of granite rocks located at the mouth of the Singapore Straits.

It is named for its white appearance due to guano, a fancy word for bird droppings. Apparently the island was popular with birds called black-naped terns, which used the island as a nesting ground.

So, a collection of shit-covered rocks that was once a bird nest. Why all the fuss and media attention?

The answer is simple, territorial waters. Ownership of this rock outcrop comes with control over the sovereignty of the waters that surround it.

As Pedra Branca is strategically located at the nape of the entrance to the Singapore Straits, it is vital that Singapore retain sovereignty over it to ensure easy passage for ships traversing that route.

After an extended legal process involving the highest courts in literally the entire world, a 29-year dispute was finally resolved with ICJ’s 2008 judgement awarding the rocks of Pedra Branca to Singapore.

So is PM Lee’s comment that Pedra Branca is an old subject that was settled long ago an “irresponsible accusation”? We simply call guano.

It’s all about timing

Almost a decade later, the Malaysians have gone to the ICJ again, and they are asking the Court to reinterpret and to revise the judgment, reopening the subject. – PM Lee Hsien Loong

Malaysia’s first attempt in February to launch an appeal was credited to three documents uncovered from UK archives. According to them, this constituted the “discovery of the new facts” which would affect the ruling.

Since ICJ’s deadline for an appeal application is until ten years from the date of judgement, it’s not against the rules for Malaysia to do this. We can probably assume that Malaysia has done their homework and uncovered as much evidence before the 10-year deadline rules out another appeal forever.

Unfortunately, this was not the case.

Singapore’s rebuttal to the claim was comprehensive and relatively swift, as we found the new evidence was not conclusive enough to overturn the judgement. We then waited patiently to take this age-old debate back to ICJ courts.

But when a second separate application was filed by Malaysia in June 2017, we couldn’t help but wonder why. Why a second bid and most importantly, why now?

Turns out that Malaysia’s second application to ICJ was to seek clarification on the Court’s 2008 judgement. They basically asked ICJ to declare that South Ledge is located in Malaysia’s territorial waters and that its ownership belongs to Malaysia.

Again, the timing of this second bid seems questionable. Why wait nine years to bring this up if they thought that the ruling was unclear back in 2008?

ICJ’s 19-page summary of the ruling was also incredibly clear. It addressed every argument that the 5-year litigation process brought to the table.

They also concluded that Malaysia may continue to rock the Middle Rocks while Singapore gets to rule Pedra Branca. Also, we each get to keep the waters surrounding them. As for South Ledge, a rock formation only visible at low tide, this is what the summary stated: 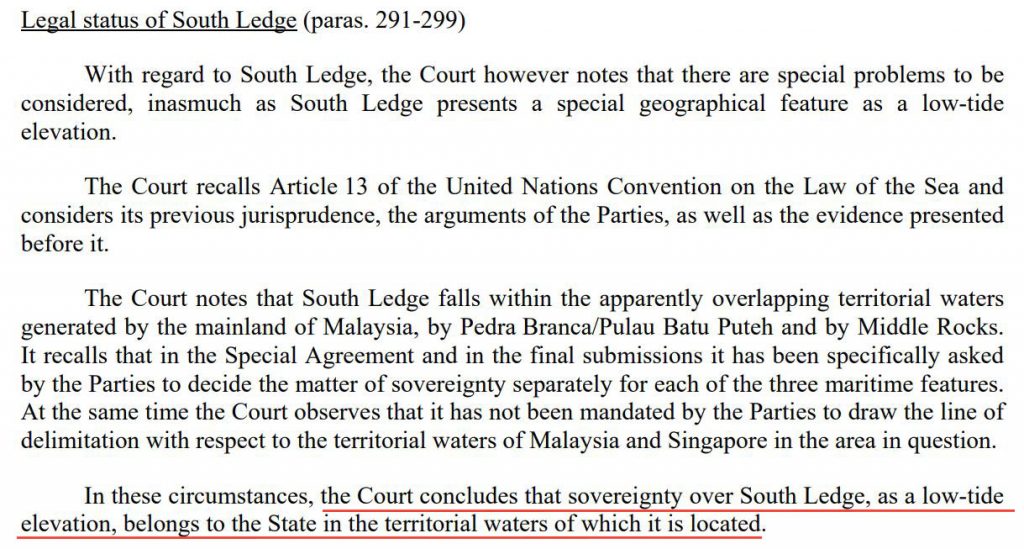 Due to its nature of being a special geographical feature, South Ledge belongs to the State in the territorial waters of which it is located.

In its bid, Malaysia claims that both Malaysia and Singapore have been unable to agree on the scope or meaning of the ruling and the “ongoing uncertainty” over the disputed areas “continues to complicate the task of ensuring orderly and peaceful relations”.

If only some committee was set up to interpret this tricky ruling. Well, the Malaysia-Singapore Joint Technical Committee (MSJTC) was tasked with this very job in 2013.

We are led to wonder why Malaysia chose to dispute the original ruling with ICJ instead of working with the MSJTC to figure out a better execution of the ruling.

A matter of strategic political timing or pure coincidence? We’ll leave it to you to decide.

I am not sure what Malaysia’s motive is, but their General Election is coming, and maybe that has something to do with it. – PM Lee Hsien Loong

The question remains about Malaysia’s motivations in filing these two bids since ICJ’s ruling was a done deal. But if we consider Malaysia’s ICJ bids in a political context, it may make more sense.

With the ICJ bids coming conveniently after Malaysia’s general election has been announced, it’s hard not to draw the correlation.

Glancing back at Malaysia’s political history, we can also find instances where the Pedra Branca ruling was brought up by UMNO’s political opposition as a weakness. Reopening the case may unify Malaysians to UMNO’s cause, or convince voters that PM Najib’s leadership is strong when it comes to foreign policy.

Thus, it’s no surprise that both PM Lee and some political experts have pointed out that these may signal possible political motivations.

Malaysia’s bids have been called a “long shot” by most political pundits. This is due to the strict criteria set by ICJ that they have to meet in order for a case to be reopened.

Also, the global credibility and recognition given to ICJ rulings will not work in Malaysia’s favour. ICJ is known for upholding the strictest standards of law in dealing with global disputes.

This may be why Malaysia was not keen in taking this dispute to ICJ in the first place. They actually only agreed to Singapore’s 1989 proposal for official litigation, 5 years later in 1994.

It may not be logical why Malaysia would be keen to fight a losing battle, but casting sufficient doubt on the issue would create the impression that the matter remains unsolved. This may allow Malaysia to claim that the matter of Pedra Branca is still under dispute which is a more aggressive assertion of their sovereignty.

It remains unclear if this assertion under Prime Minister Najib’s domain is orchestrated by a higher power familiar with territorial disputes, but it is obvious that PM Najib has changed his tune regarding the ruling since 2008.

After all, he had even commented that the ICJ’s ruling was a “balanced decision” with Malaysia being “partly successful” in their territorial claims back in 2008.

He even went as far as observing that some people viewed it as “a win-win situation”.

Perhaps brooding about the issue for the past 9 years has finally made him decide to take action. Well, it’s not like he was busy worrying about any other scandals in recent years anyway.

Our friendship with Malaysia has stood the test of time since our amicable breakup in 1965. Though we’ve been through a lot in recent years, surviving national debates about Nasi Lemak burgers to national sports, could Pedra Branca be the straw that breaks the camel’s back?

It’s probably unlikely. Our mutual respect for the rule of law led both Malaysia and Singapore to agree leaving this judgement to ICJ instead of using retaliatory rhetoric and passive aggressive sanctions.

We also chose to uphold ICJ’s ruling instead of calling guano like certain other neighbours in long distance relationships and similar territorial disputes.

That’s the thing about neighbours. When the stones have settled, we just have to learn to live with each other. 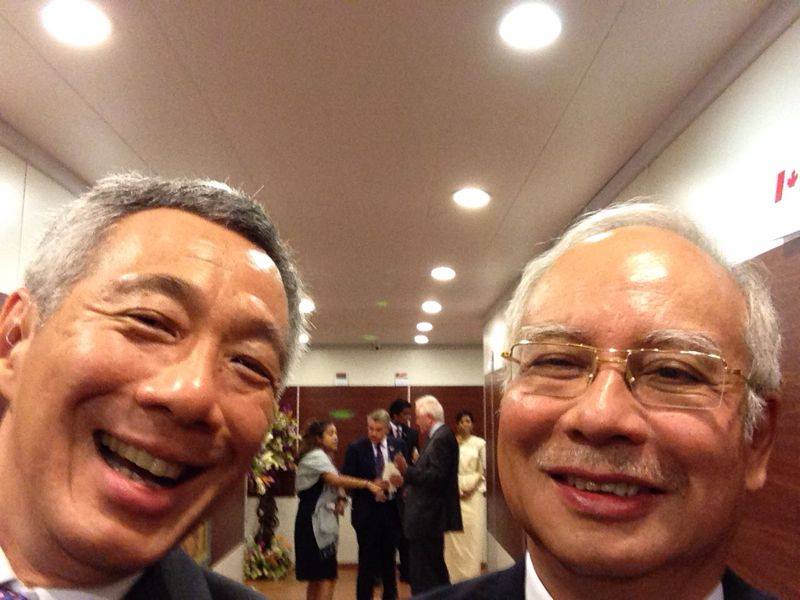