Would there be a day for commemorating our founding father?

A website petitioning for 23 March to be gazetted as a public holiday was pulled before 2am today (1 April). The petition was to pay tribute to Mr. Lee Kuan Yew who passed away on that fateful day, but the collection of personal data including name, telephone number, email and National Registration Identity Card (NRIC) number raised public concern.

Dr John Lim, the President of Academy of Certified Counsellors, started the petition on Sunday afternoon. It was initially http://www.1923-2015.com, but was later changed to http://lkyday.com after his friends commented that the former was difficult to remember. 17,000 signatures were collected before the website was taken down after members of the public complained that collection of NRIC numbers were “used for marketing purposes”. 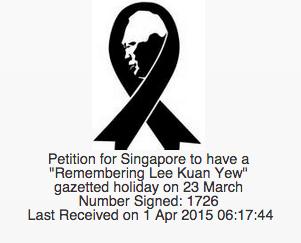 I respect differing opinions, but false accusations must be debunked,” he said. “We are going according to the petition rules in Singapore – even my personal data is there. I signed the petition as well.

We are just simple folks who want to do something to help the young remember the timeless values and principles that LKY embraced for the development of this nation – such as integrity, space for every race and religion.

He wanted to attain 100,000 signatures to be submitted to the Prime Minister’s Office and Ministry of Manpower for consideration.

The website is now up – sign now if you want an LKY day! (Don’t just do it for an extra public holiday!)