Must Share News – Independent News For Singaporeans
Home People Petition To Make Thaipusam A Religious Holiday Gets Over 3,000 Signatures In... 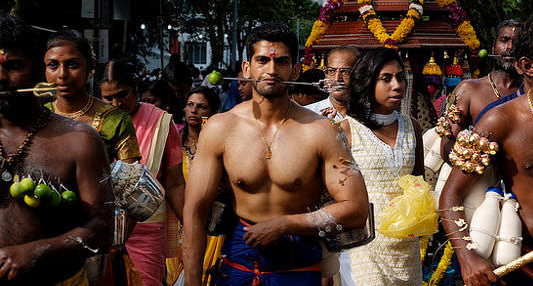 A lady is advocating for Thaipusam to be a public holiday

Hinduism is considered one of four major religions in Singapore, but the Hindu community has been allocated just one public holiday a year: Deepavali. For comparison purposes, Christians have two days (Good Friday and Christmas Day), Muslims have Hari Raya Puasa and Hari Raya Haji, and Buddhists have Vesak Day.

A festival widely celebrated by Hindus in Singapore, Thaipusam was removed from the list of public holidays many years ago by the Ministry of Manpower, to “improve business competitiveness”. Other holidays removed were Easter Monday and Mawlid (the birthday of the Prophet Muhammad). Recently, a petition was started up by Ms Sangeetha Thanapal on Change.org, requesting that Thaipusam be reinstated as a religious/public holiday in Singapore. The petition has garnered more than 2,000 signatures at the time of writing, and is addressed directly to Madam Halimah Yacob, Chairman of the Public Petitions Committee in Parliament. 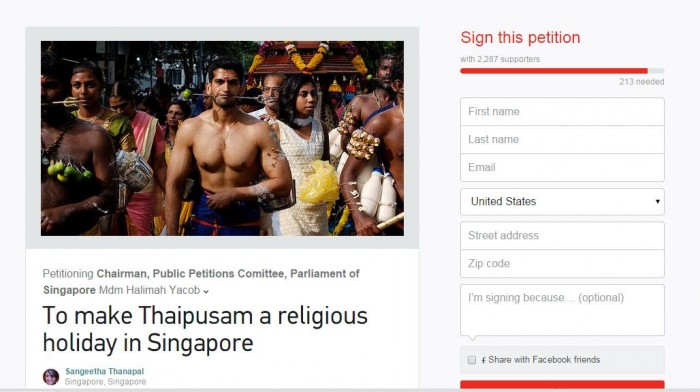 Making Thaipusam, which falls in January/February, a public holiday may result in there being too many public holidays during that period. Frequent holidays are not good for businesses as they lower productivity. Therefore, the MOM has a very delicate tightrope to balance around.

There is also the need to respect major religions and give them the space to celebrate their festivals. Petitions are not only a means to achieve a goal through rallying people’s support, but are also a device to raise awareness.

The significance of a religious petition

The MOM and the government cannot afford to ignore this petition. If enough signatures are gathered, there would be a need to address the issue directly. Why, for example, is there only one Hindu festival made a public holiday, while Christians get two (Good Friday and Christmas)? Such questions cannot be swept under the carpet, but must also be handled in a manner which does not offend.

As one of the four major religions in Singapore, treatment of Hindus has to be aligned with the other religions — Christianity , Islam and Buddhism. Otherwise more of such cases may someday escalate into cries of unfairness and religious tensions.

If the government has reservations about making Thaipusam a public holiday because of its date and clashes with businesses, maybe they can consider another significant Hindu festival to gazette.

A rethinking in MOM’s priorities may be required — sacrificing celebrations in favour of work really sucks for employees, but this has been allowed to happen for years, with only 11 public holidays gazetted a year. No wonder Singaporeans are “under happy”.

Regardless of whether the petition is successful, Ms Sangeetha Thanapal is a brave woman to start the ball rolling. Important questions like these should be asked and answered.

Featured image via Change.org
With references from Ministry of Manpower, Wikipedia, Wikipedia