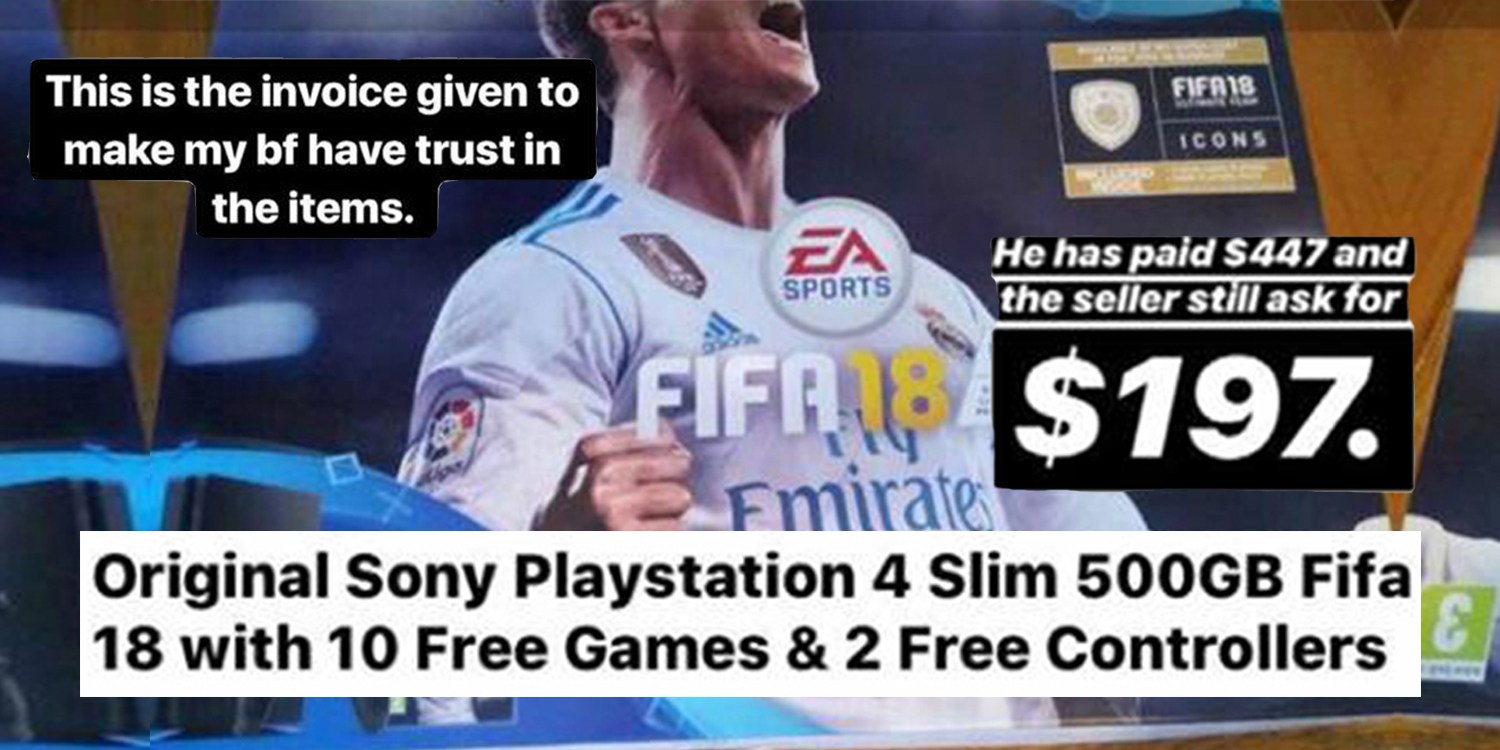 There are all manners of scams out there.

And you may be wondering why – in this day and age – people still seem to be ensnared by the idea of too-good-to-be-true bargains, despite multiple warnings. 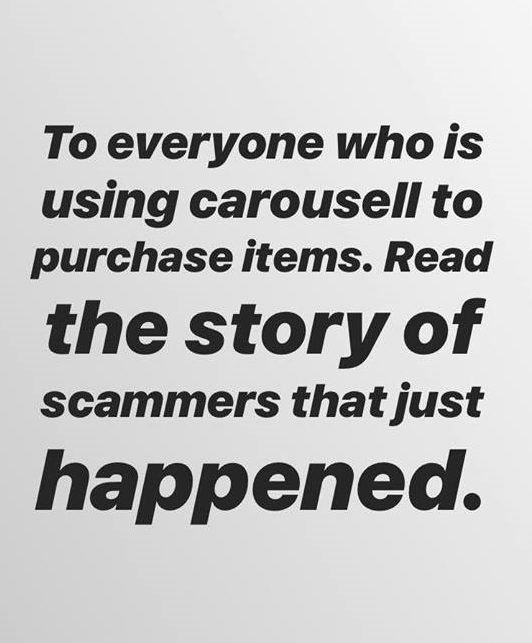 Well, this alleged scam involving a PlayStation 4 (PS4), someone else’s NRIC and a legit looking sales invoice, might just explain why it’s not that simple.

User Inaa Jane took to Facebook on Friday (May 11) to detail a series of unfortunate events, which led to her boyfriend paying $447 for a PS4 that never came.

Here’s her post in full, we summarise it after the jump.

Ms Jane’s boyfriend chanced upon a listing on Carousell that promised a pretty sweet bargain. 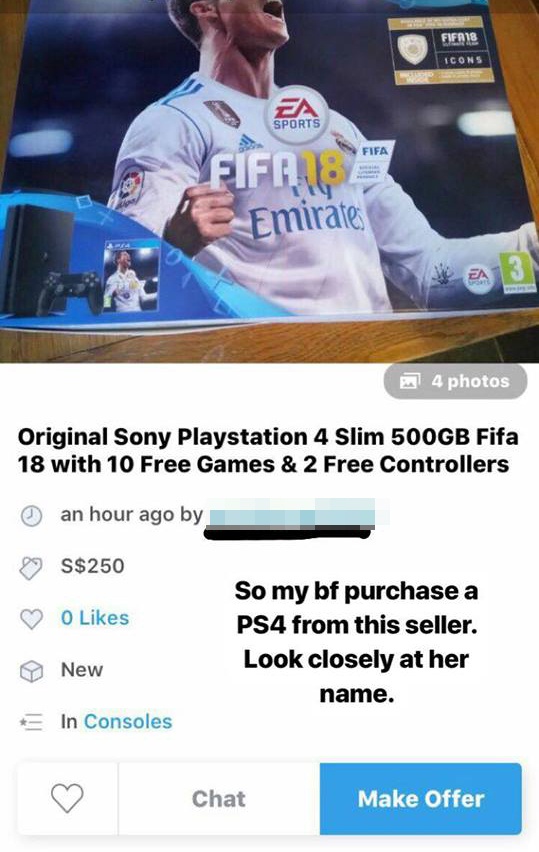 The seller promised 10 free games and 2 free controllers, along with the “original” item.

Everything was going smoothly 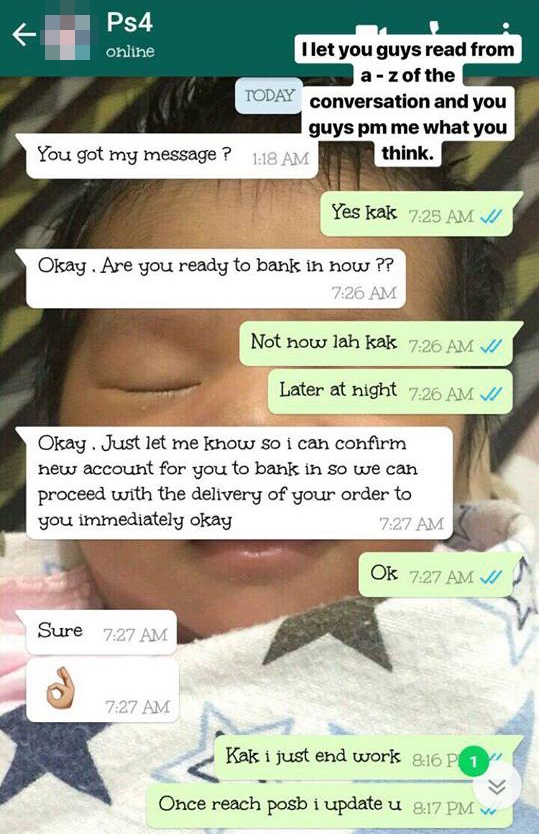 Who said she would “proceed with the delivery of [his] order” immediately. 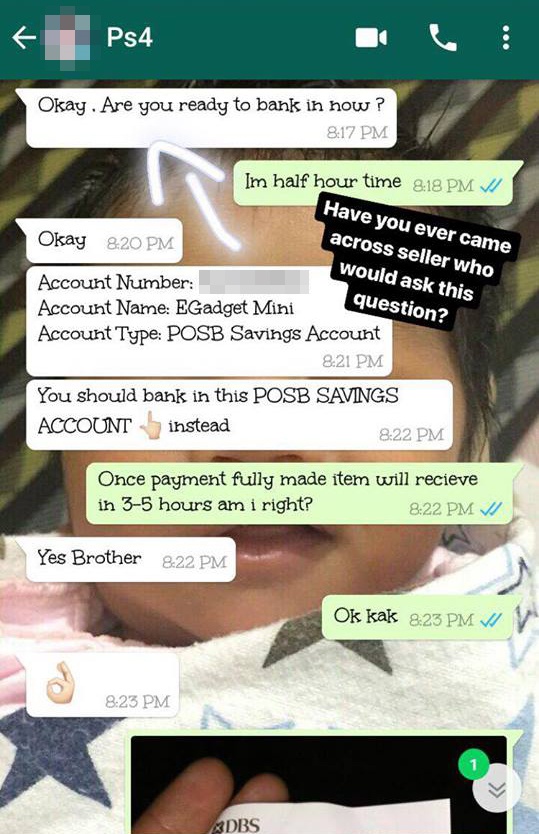 They agreed that once payment was fully made, the item would be delivered in “3-5 hours”.

Ms Jane’s boyfriend duly did it, and sent over a screenshot of the ATM slip. Next, he was told to confirm details like his name, address, email and telephone number to “proceed with payment confirmation”. 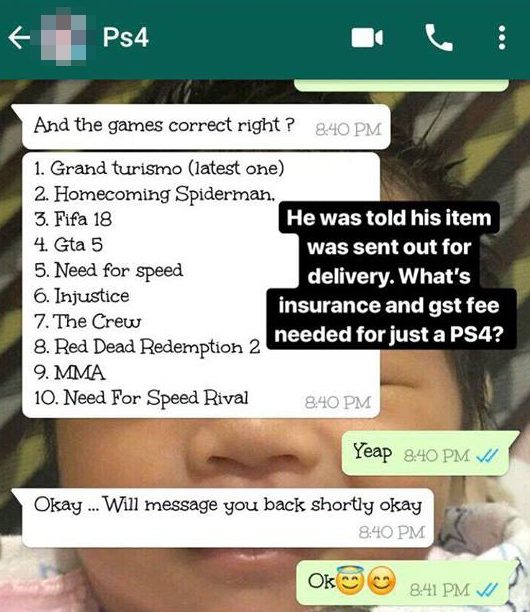 The seller even verified the list of 10 games he was getting free:

And promised to “message [him] back shortly”.

This is where things quickly took a turn for the suspicious. 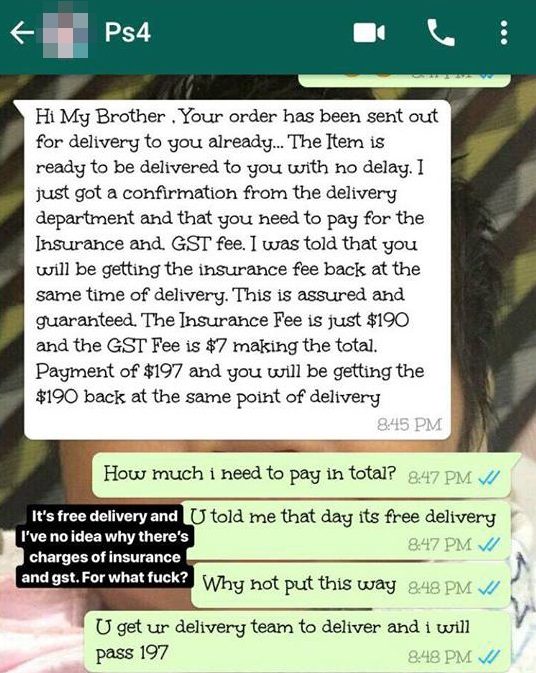 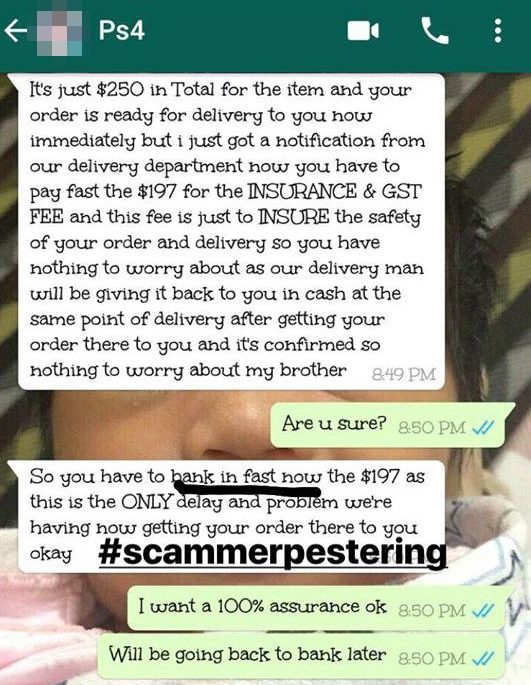 The seller promised that this $197 charge would be returned in cash upon delivery.

And that it was urgent for him to make the transfer to avoid delays in shipment.

Upon assuring Ms Jane’s boyfriend, whom she referred to as “brother”, the seller even guaranteed a “INVOICE OF PAYMENT” via email, to prove the transaction was legit. 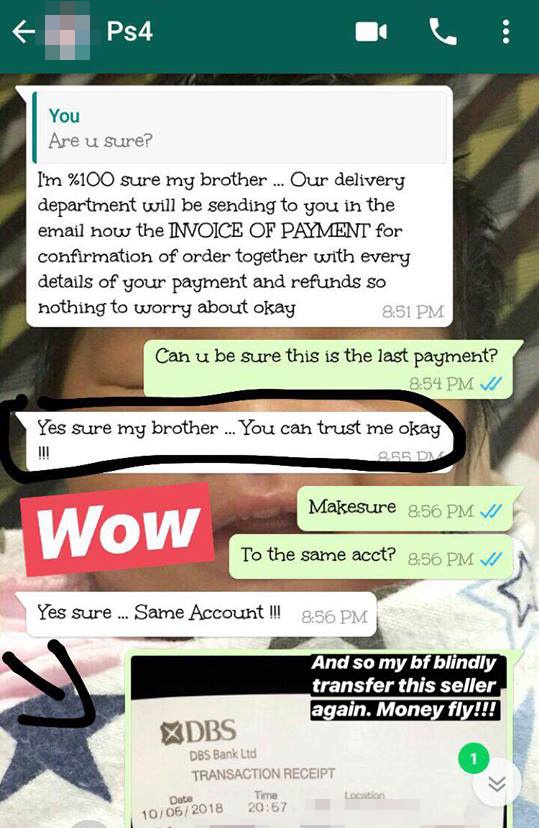 Against his better judgement, Ms Jane’s boyfriend made the transfer of $197 to the same account. 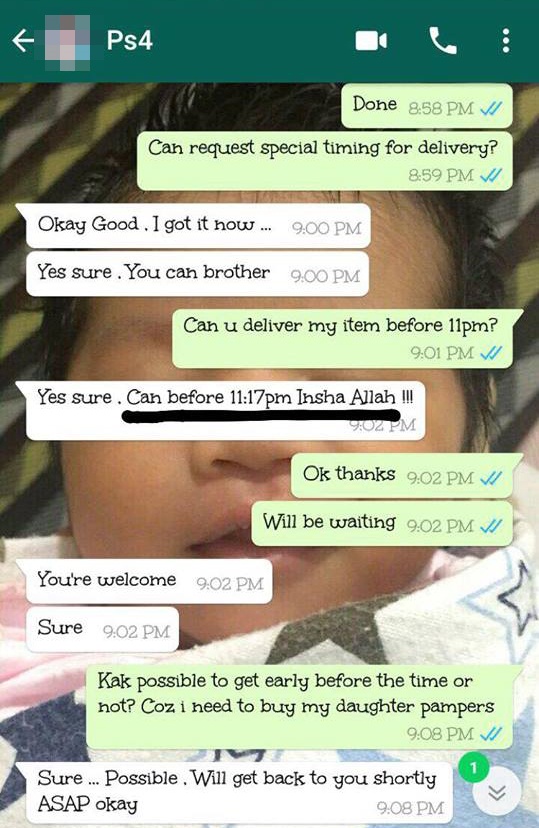 But upon receiving the official invoice, there presented a new problem. 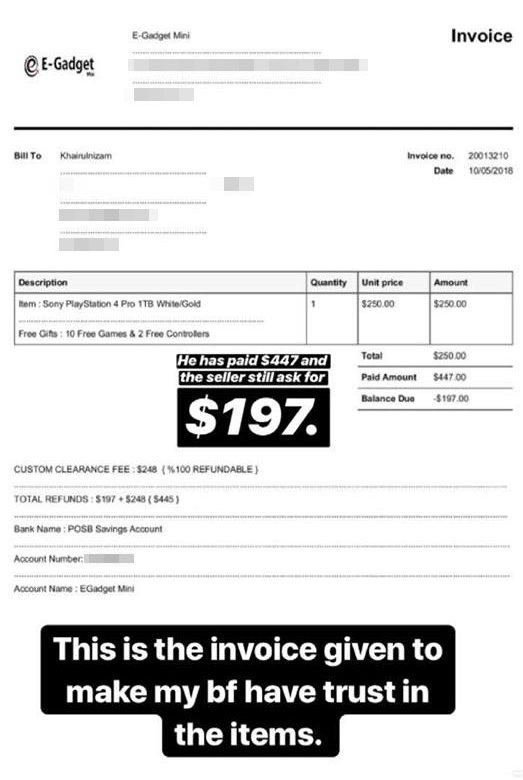 Ms Jane’s boyfriend also received a WhatsApp text from the seller, asking him to make “customs clearance payment as soon as possible”.

To avoid additional “demurrage security delay charges”. Demurrage, referring to the fee imposed by customs on an item that stays too long at the shipping dock. The seller reasoned that the good bought from the “Duty Free” section and labelled as a “Gift” to qualify for fee waivers.

However, the customs official realised it’s not a gift but a commercial item, and thus, the new fee imposed. 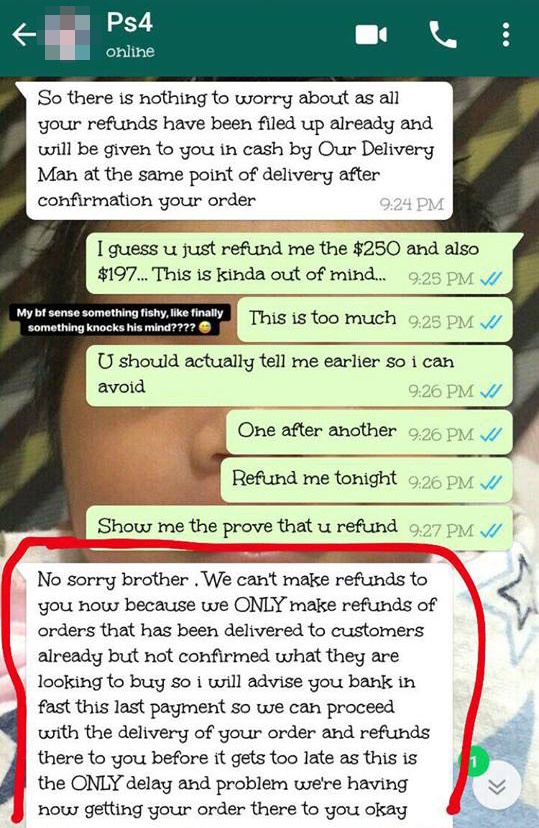 Stressing that Ms Jane’s boyfriend should not worry, and transfer the additional amount.

The seller advised him to “bank in fast this last payment” before it’s too late, and they couldn’t get his order. 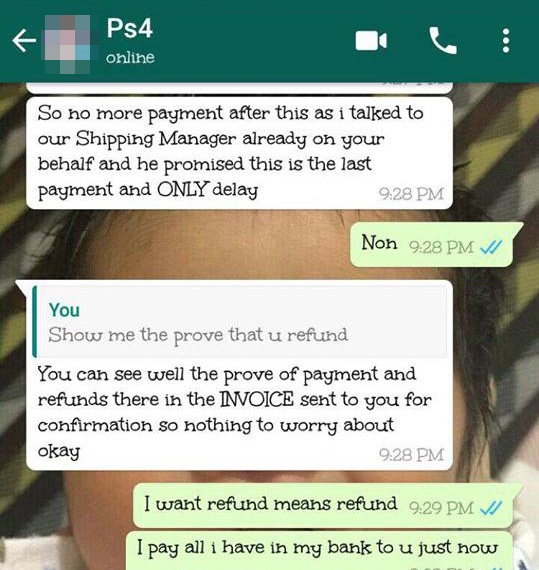 Perhaps turned off by the idea of yet another payment, Ms Jane’s boyfriend immediately asked for a refund.

However, he was met with firm resistance from the seller.

Who gave him 18 minutes to do as he was told, or the “CUSTOM OFFICIALS” would impose yet another late charge on the parcel. 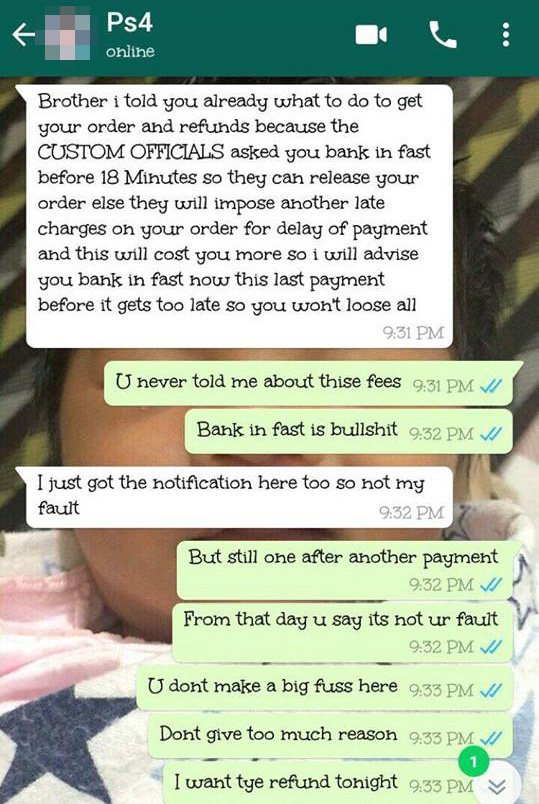 Ms Jane’s boyfriend outright refused, and insisted on getting a refund that night.

A pink NRIC sent over

The seller once again reiterated her stance, but Ms Jane’s boyfriend asked for a full refund of $447. 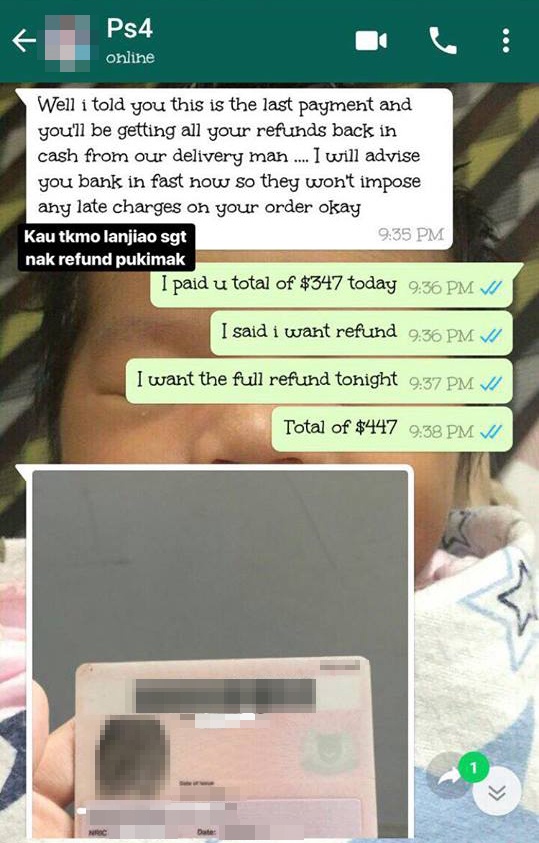 To which the seller bizarrely replied with a screenshot of a pink NRIC.

And threatened to stop replying if he did not do as she said in 11 minutes. 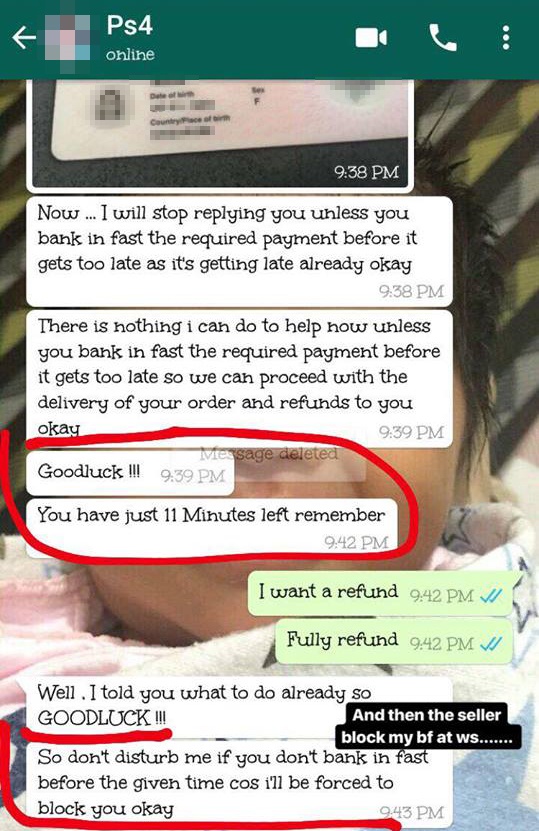 Wishing him “GOODLUCK!!!”, the seller added that she’ll be “forced to block” him, if he did not bank in the money before the given time.

Ms Jane also stepped in, to inquire if the PS4 was on its way. 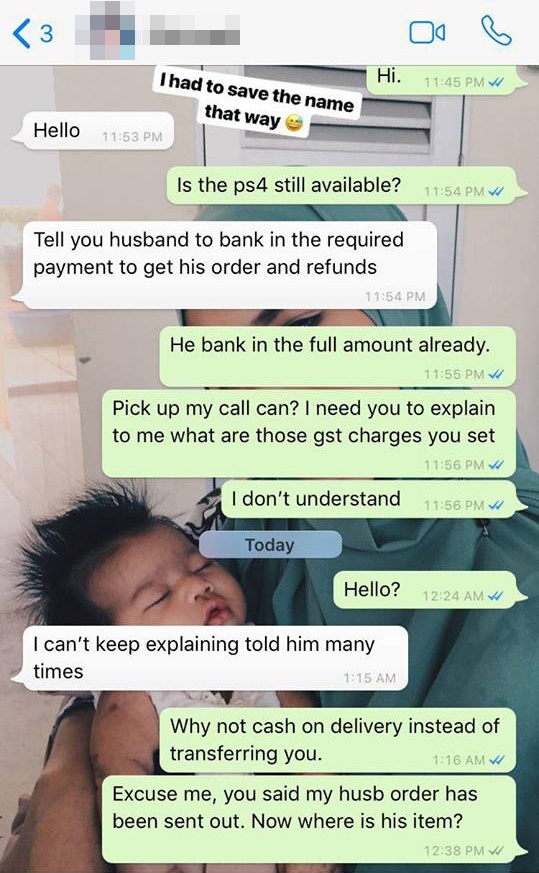 However, she was met with the same insistent reply to transfer the additional charges.

Someone else’s NRIC sent as proof of identity

Ms Jane dug a little deeper after the incident. 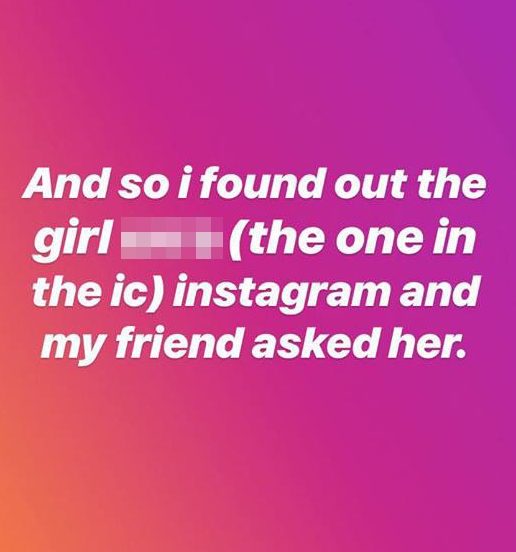 And found, to her horror, that the seller’s phone number did not match the owner of the NRIC. 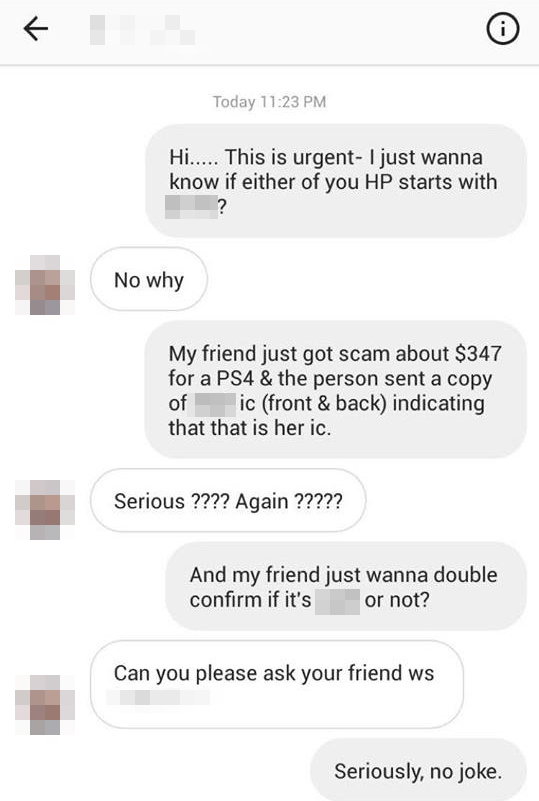 She clarified with the IC owner’s husband that the IC was used falsely as proof of the seller’s identity. 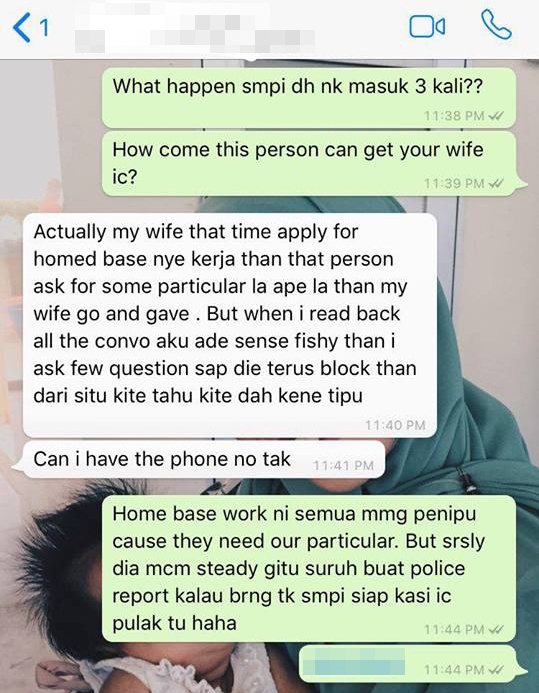 The seller’s phone number was also passed on to the IC owner’s husband, so they could look into making a police report about the case.

Currently, Ms Jane alleges that the scammer has taken on a new username and is still active on Carousell. 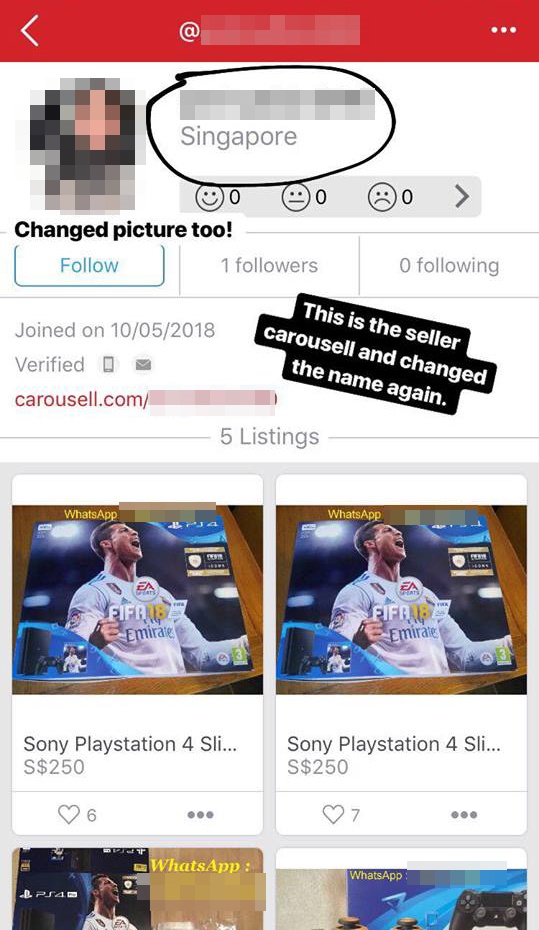 We surmise that she’s suggesting that the same modus operandi will be used to continue the “scam”.

We know that being a discerning buyer is sometimes easier said than done.

Do remember that if communications are taken off the Carousell app, it will be hard for Carousell to take action, when the transaction goes awry.

So although this Carousell story did not end well, we think that future deals don’t have to.

As long as we all make it a point to be doubly sure about an offer, before sinking any money into the deal.