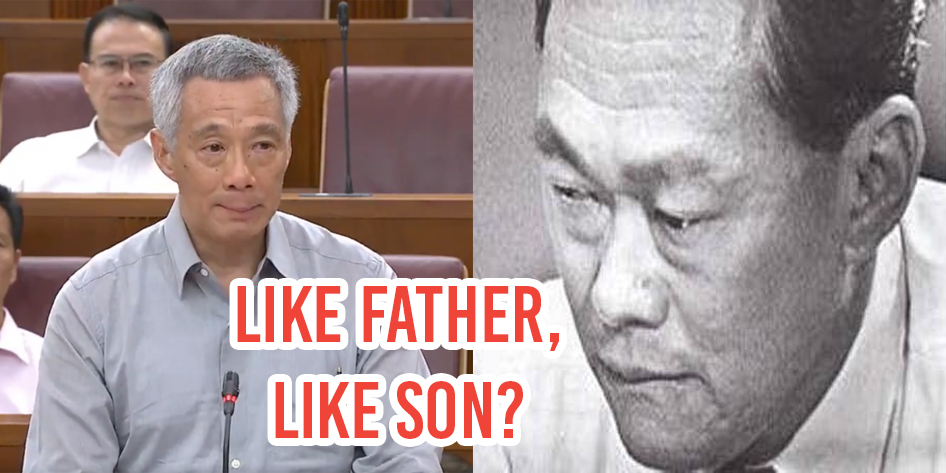 When people see a leader cry, it may make him seem more vulnerable, but also makes people see a previously untouchable and lofty person more as a human being who has emotions just like the rest of us.

So it was during Day 2 of the parliamentary sitting on the 38 Oxley Road saga that Singaporeans might have seen Prime Minister Lee Hsien Loong in a more human light — after he turned on the waterworks in Parliament as he recalled a childhood moment.

The shocking moment happened while PM Lee was delivering his closing speech and providing a summary of queries fielded by the chamber.

The PM barely managed to hold in his tears as he spoke about a poignant conversation he held with his late father, Mr Lee Kuan Yew.

When I recounted how when I was about 13, my father had told me: “If anything happens to me, please take care of your mother, and your younger sister and brother.”

He proceeded to paint a picture of the political climate back then.

Singapore was then part of Malaysia. We were in a fierce fight with the central government and the communalists.

My father did not tell me, but he knew his life was in danger.

Fortunately, nothing happened to my father then. He brought up the family. And I thought we had a happy family and he lived a long and full life.

It seems like he wasn’t expecting a falling out with his siblings following his father’s death.

Little did I expect that after my parents died, these tensions would erupt, with such grievous consequences. After so many years, I’d be unable to fulfil the role which my father hoped I would.

It’s hard to imagine how the Lee siblings would get back to happier days, but PM Lee is holding on to a glimmer of hope.

So, I hope one day, these passions will subside, and we can begin to reconcile.

Here is the video in full:

VIDEO: An emotional moment for PM Lee in #Parliament recalling memory of his father https://t.co/85rTebgwqv pic.twitter.com/IBWXE06CKD

He added that it’ll be a “difficult and long road”, but hoped that ultimately, “some rapprochement may be possible”.

Now, nobody is doubting that PM Lee must indeed be really distressed at being at odds with his siblings in such a public way.

But his tears in Parliament are reminiscent of those shed by another great leader of Singapore.

Who? Well, none other than his father Lee Kuan Yew.

Which Singaporean can ever forget that iconic moment that we have seen on TV almost every National Day? Then Prime Minister Lee Kuan Yew crying into a piece of tissue paper on Aug 9, 1965 during a historic moment — Singapore’s separation from Malaysia and independence.

While PM Lee’s tears aren’t exactly at a similarly momentous moment, perhaps they will have the same effect of bringing Singaporeans together to laud him for showing his passion and emotion in what must be a difficult time in Singapore’s history, and difficult time for him personally?

PM Lee has said that he does not need a “magic” property like 38 Oxley Road to bolster his authority as PM.

But of course he doesn’t need the property — after all, it’s just a house.

What is more potent than a house is the memory of his legendary father, and how our PM reminds us of him.

And these tears in Parliament may just do the job.

We wish PM Lee all the best, and hope he will reconcile with his siblings and end the dispute.