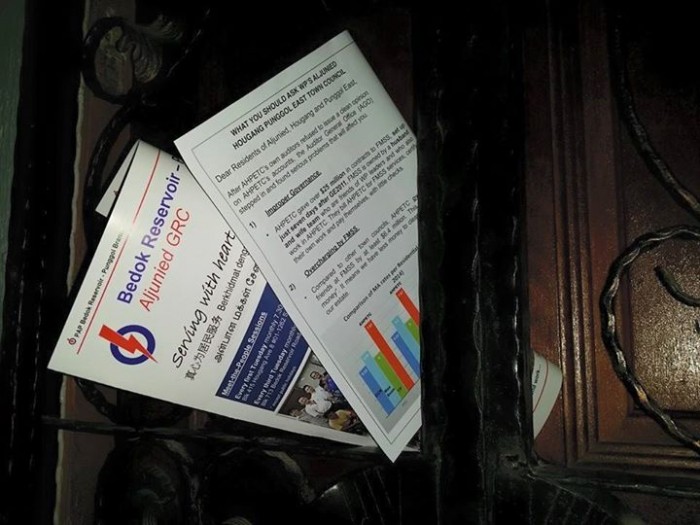 The act of distributing flyers was disputed online by some netizens, claiming that there were instances where giving out flyers of a political nature landed a few people in jail. They also wondered if the PAP activists were breaking the law.

We covered their actions here.

Following the questions from the public,  the Singapore Police Force released a statement yesterday, clarified that flyer distribution is not against the law, and left the matter at that.

The subsequent reactions from netizens were predictable, accusing the police of having double standards especially after Singapore Democratic Party (SDP) members got arrested for doing something similar.

Did the PAP activists really break the law, and is the police really practicing double standards?

The answer to both of these questions appears to be no.

Victor Lye certainly appeared confident enough in his actions, posting a group picture of the flyer distributors on his Facebook page. We think he probably got consent from the authorities before he made his move.

Say what you will about the PAP and their seemingly underhanded methods, but they are much less likely to cross the line in terms of political smearing. They repeatedly asked residents to question the WP, but never veered into personal attack territory.

So asking questions is okay? Great! Oppies, you guys know what to do. And remember, flyers can’t be distributed in “public places”, but putting them outside doors of homeowners is okay!

The Workers’ Party did not resort to personal attacks when they were campaigning in elections, and oh, look, they now have seats in Parliament. We’re sensing a possible co-relation there.

Perhaps this is a wake-up call to the other opposition parties to have some maturity and quit with the name-calling and accusing the government of things that cannot be conclusively proved. Now that distributing political flyers is definitely not illegal, they can start handing out flyers too, since the PAP has started the ball rolling.

All they have to do is copy the PAP’s methods and ask questions. Also, they should probably check the flyer contents with the authorities and see if they fly.

WP’s Chen Show Mao has already started. Cool as a cucumber because he was given the green light by the police.

And now if the police decides to take action against any opposition parties for distributing flyers, we can then accuse them of double standards. But for now, political flyer distribution in HDB estates appears to be completely legal.