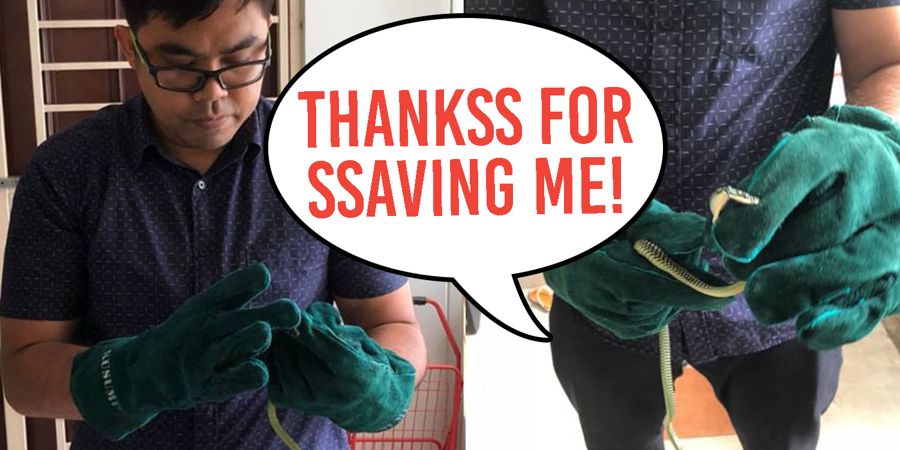 What’s more charming than a man in uniform? A snake charmer who’s an off-duty policeman of course.

Courageous Inspector Fariz Bin Mohamad Noor helped to locate and secure an unwelcome reptilian house guest from his neighbour’s home, releasing it back into the wild on Tuesday (28 Nov).

As it turns out, the Paradise Tree Snake or ‘flying snake’ that he caught happens to be a master escape artist. Perhaps Inspector Fariz can now add ‘Pet Detective’ to his credentials as well?

Thankfully, no innocent creatures were harmed in this heartwarming rescue, unlike the recent SMRT baby Godzilla scare.

You may monitor her post here or peruse our summary below.

Reptile in the house

According to Ms Wong, she first spotted the snake at around 12.15pm in her Bukit Batok flat on Monday (27 Nov) and immediately called the police.

She was then told to contact the Agri-Food & Veterinary Authority of Singapore (AVA) instead.

When an AVA team turned up two and a half hours later, the snake had already slithered out of sight. But Ms Wong’s family was sure it hadn’t left the house.

Having heard from Ms Wong’s family members about the situation, kind-hearted Inspector Fariz assured Ms Wong that she could contact him for help anytime, if the snake appeared again.

The unwelcome guest decided to stay another night with the family, only making a reappearance the next morning.

Ms Wong immediately contacted the AVA again, but was informed that they would take at least half an hour to arrive.

While waiting for AVA’s assistance, Ms Wong contacted Inspector Fariz, hoping that he would keep his promise to help.

True to his word, Inspector Fariz rushed home to assist Ms Wong’s family in tracking, capturing and releasing the snake back into the wild. 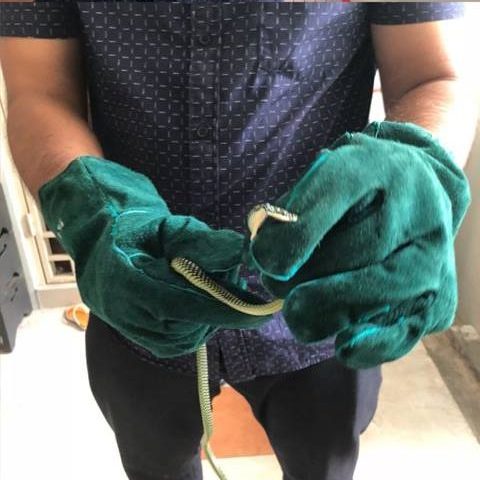 He was so efficient that he managed to beat the AVA team who missed out on catching the snake a second time. 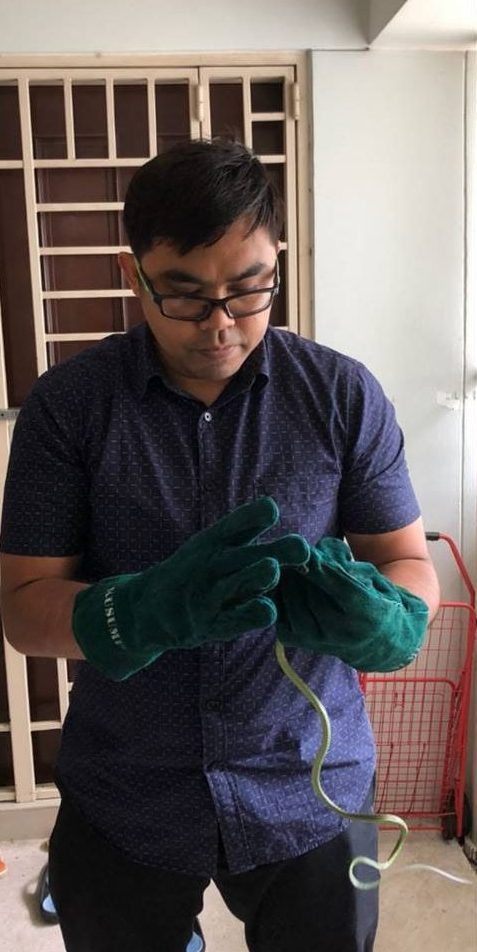 A tree snake in paradise

AVA has identified the reptile as a Paradise Tree Snake from a WhatsApp photo Ms Wong sent over.

Paradise Tree Snakes are famed for their ability to launch themselves from treetops and sail as far as 100 metres. That’s probably how Ms Wong’s unexpected guest ninja-ed its way into her home in the first place.

Just take a look at this master escape artist in action.

These snakes swim through the air by twisting their tails from side to side, crossing large distances quickly.

They are known to parachute from tree to tree, but we guess that high-rise flats are now an option too.

All things considered, this makes Inspector Fariz’s feat even more incredible as he somehow managed to catch this slippery fiend without professional help.

Praising him for going beyond the call of duty and showing compassion to living creatures, Ms Wong also said that he demonstrated the true ‘Kampong Spirit’.

We at MustShareNews would like to commend Inspector Fariz too for assisting in the daring rescue of this reptilian citizen.

For everyone else living in Ms Wong’s estate…If there’s something ssstrange in your neighbourhood, you know who to call. 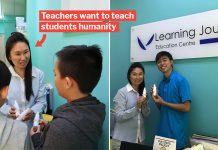