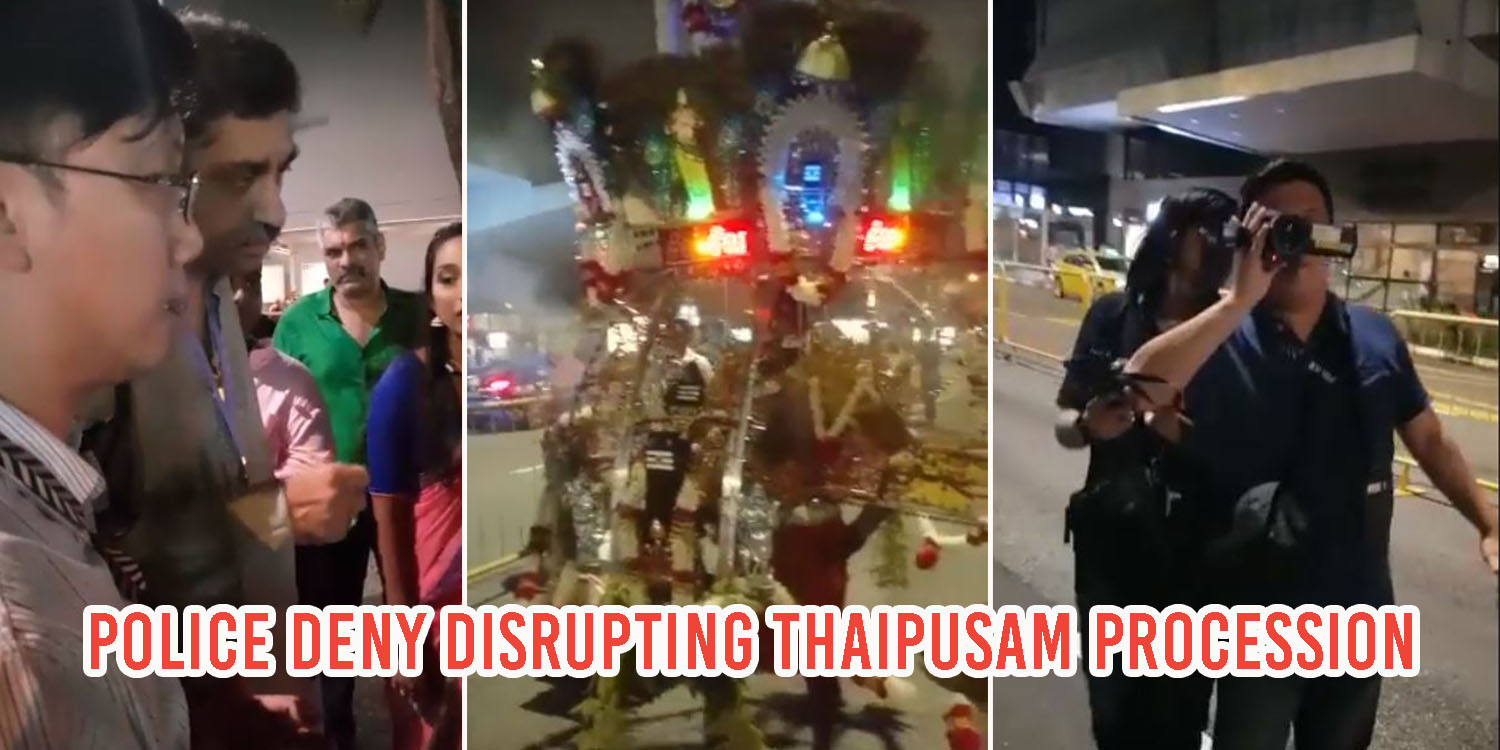 The police have detailed their side of the story, with regards to the Thaipusam incident.

What Thaipusam incident you may ask?

A Facebook post uploaded by one Pradeep Thana on 5 Feb, alleged that a Hindu Endowments Board (HEB) member and police officer attempted to stop a kavadi procession during Thaipusam.

Apparently, a girl called Vaishnavi was singing hymns and supporting her father along Serangoon and Selegie Road, when a HEB and police officer stopped the procession and accused them of singing too loudly.

Mutual recording of each other ensued over their smart phones, resulting in many triggered netizens from the post made by Mr Thana on social media.

So since this has evolved into a ‘Police Said Netizen Said’ situation, we’ve summarised both sides of the story here.

Mr Thana made an impassioned case for a young female singer called Vaishnavi, an internet sensation in 2016 who was allegedly stopped during Thaipusam on (31 Jan).

You can view his post in full here, we summarise the sequence of events according to him after the jump.

So this is what happened according to Mr Thana:

He concluded that they were appalled by the authority’s behaviour, as they were only “singing hymns and in no way a nuisance”.

Saying they were “well aware” there were a few HDB blocks around and they strove to keep the volume down.

The post has garnered more than 3000 shares at the time of writing, with hoards of netizens criticising the HEB officer and police officer for interrupting the peaceful procession.

However, since outdoor religious foot processions generally aren’t allowed, the Singapore Police Force (SPF) saw fit tell their side of the story in an equally lengthy post.

At around 12am on 8 Jan, SPF detailed their side of the story in an official statement on Facebook, entitled “CLARIFICATIONS ON THAIPUSAM INCIDENT”.

Here is their post in full. We summarise it once again after the jump.

And this is what happened according to the police that fateful day:

The police then went on to describe a second “engagement” with the group at around 4.30am.

Here’s what went down the second time:

Police refuted claims that the group was “filmed and followed for 30 minutes” and called it “patently untrue”.

Saying that SPF and HEB officials were “accommodative during the engagements” despite the group having “broken the law and challenging them”.

Furthermore, the engagements had to be “filmed in their entirety by Police for evidentiary purposes”.

SPF justified it as a way to uphold both the interests of the devotees and the Police.

They concluded by reassuring citizens that the Police will work closely with HEB to ensure the Thaipusam procession continues to take place in a peaceful and safe manner.

Why is there a ban on religious foot processions?

Why is it that “outdoor religious foot processions” are not allowed in the first place?

This decision to ban such processions arguably stems from a race riot that occurred during a Muslim procession held to celebrate the Prophet Muhammad’s birthday on 21 July 1964.

In the aftermath of the riot, 23 deaths and 454 injured were amongst the reported casualties, as well as extensive damage to public property.

21 July is now designated as our Racial Harmony Day to commemorate this darker period in Singapore’s history.

Of course, it’s unfair to assume that holding a religious procession now, will directly result in a race riot, given that circumstances now and then are completely different.

Also, the banning of musical instruments during processions seem to have more to do with the loudness of the procession, rather than the religious nature of it.

Laws seem to be less strict than before

Over the years, SPF has worked with HEB to balance public interests with ensuring that the Thaipusam foot procession takes place safely for devotees.

In 1973, the restriction on playing musical instruments along the procession route was introduced. However, due to feedback from devotees, SPF and HEB have “increasingly allowed religious music over the years”.

Since 2011, devotees have been able to sing religious hymns along the procession if “no amplification devices are used”.

As of 2012, “static music transmission points” were allowed for music to be broadcast to devotees.

Additionally, along the procession route, three live music points were allowed since 2016.

Where do we go from here?

In conclusion, much has been said about striking a balance between allowing important religious events to take place, and preserving order.

Unfortunately, things still don’t seem to go smoothly every year with a trio of processioners were also recently convicted for scuffling with police in 2015’s Thaipusam procession.

We can only hope that next year’s Thaipusam will proceed without incident, with the lessons learnt on both sides from this case.