Must Share News – Independent News For Singaporeans
Home Inspiration Pritam Singh Didn’t Meet A Transsexual In Person Till 2013; The Encounter...

He shared the story of how a heartfelt encounter with Fanny – a resident in the Eunos under Aljunied GRC back in 2013 – changed his views towards transsexual individuals forever.

Here are the kind words he dedicated to ‘The Singaporeans Amongst Us’ in a post on Tuesday (14 May). 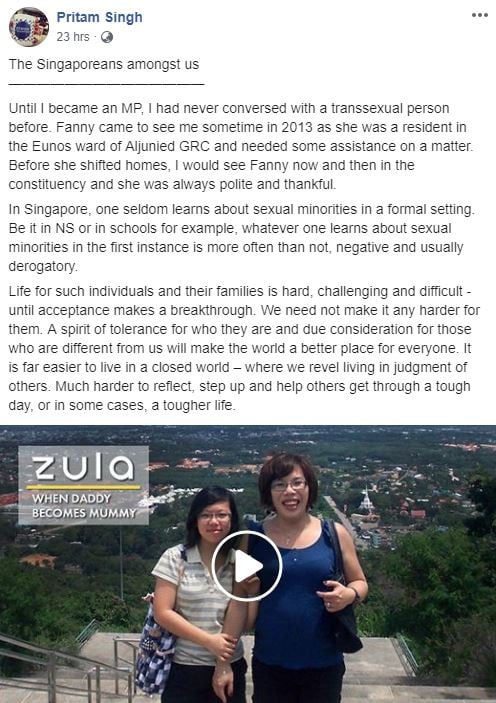 You can also watch the documentary he shared, When Daddy Becomes Mummy, by our sister site Zula here.

Spoke to a transsexual for the first time as an MP

Mr Singh honestly admits that he had never talked to a person who identified as transsexual before becoming a Member of Parliament (MP).

He recalled meeting Fanny as part of a GRC meeting, as she was a Eunos resident who needed “some assistance on a matter”.

The encounters stayed with him even after 6 years, and she eventually moved out of his ward. Mr Singh remembers meeting her “now and then in the constituency”, and describes Fanny as someone who was “always polite and thankful”.

We don’t talk about sexual minorities in Singapore

Turning the focal point back to Singapore, Mr Singh observed that we seldom learn about sexual minorities among us “in a formal setting”. He cited our National Service (NS) culture or safe school environments as examples.

Whatever one learns about sexual minorities in the first instance is more often than not, negative and usually derogatory.

As a result, individuals who don’t identify with mainstream definitions of gender or sexual orientation may find life “hard, challenging and difficult”, quips Mr Singh.

That is, until they find acceptance with their families and society as a whole.

However, Mr Singh also reminds Singaporeans not to make life “any harder for them”.

He hopes that we can cultivate a “spirit of tolerance” and treat people who are different from us fairly in Singapore.

His closing statements are beautifully written and they read,

It is far easier to live in a closed world – where we revel living in judgment of others. Much harder to reflect, step up and help others get through a tough day, or in some cases, a tougher life.

A spirit of tolerance for all

We’re heartened by Mr Singh’s kind words towards a close-knit community of Singaporeans who live among us, but aren’t always recognised.

It’s far too easy to point out the differences or cause a divide in our society. We don’t, however, need to choose to do so.

We can choose to focus on what unites us, and create a mature and open society for everyone.

That is how we create a better world for our children, built upon the foundations of tolerance and respect for other cultures, regardless of race, language, religion, gender & sexual orientation.

When Daddy Becomes Mummy: Fanny Ler On Being A Transgender Parent In Singapore

Featured image from Pritam Singh on Facebook and Zula. 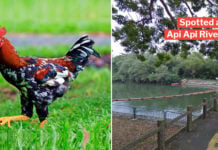