Have You Tasted “Pussy”?

Just recently, a simple energy drink has been having a hard time fitting in with Singaporean society. The newcomer to the F&B market and supermarket shelves has invited controversy among Singaporeans, gaining “popularity” across Singaporean networks. All due to its name: Pussy.

The brand introduced itself to consumers with standees featuring its ambassador “Christopher” and the infamous slogan: Have You Tasted Pussy? 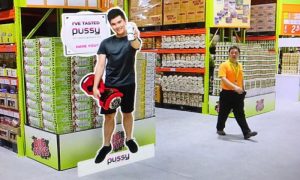 They also conducted promotional campaigns. For example, they encouraged people to take selfies with the abovementioned standees for a chance to win a 24-can carton of the drink, T-shirts, caps, and other souvenirs, according to Marketing-Interactive.

The drink’s name has moved about 3 Singaporeans to lodge complaints to the Advertising Standards Authority of Singapore (ASAS). Although the name can refer to a cat, the council decided that audiences could also view it as a vulgar reference to a woman’s genitals.

The chairman of ASAS, Prof Tan Sze Wee, said: “The council has found that consumers would recognise the dual meaning of the term ‘pussy’.”

Apparently, the name of the brand has breached the “decency” guideline in the Singapore Code of Advertising Practice. The guideline states that “advertisements should not contain anything that is offensive to the standards of decency prevailing among those who are likely to be exposed to them”, according to Marketing-Interactive.

ASAS has since informed Pussy of its verdict and urged it to modify its advertising methods.

More than anything, I think we have just witnessed the power of dirty minds.

Nobody said the name of the drink was meant to refer to a female’s genitals, but yet people complained because they couldn’t get their minds out of the gutter, and it bothered them so much that they took the trouble to complain to the ASAS. An act supposed to prove their moral righteousness ironically revealed their mental perverseness.

Chill out guys, we’re kidding. But if the shoe fits…

The hilarious thing is that, the ASAS agreed. Just imagine, a bunch of ASAS people seated around a table discussing whether the phrase “have you tasted pussy” was dirty or not. It’s just a pun.

And we think that it’s a brilliant name, as a seemingly ordinary drink shot to fame because of it.

Even if they are made to change the name, they’ve already gotten their big break.

Imagine all the advertising cost they’ve saved on. On the day of their launch, they were featured in the news, and we’re talking about them even up till now.

Everyone knows the brand. If anything, what they did was plain marketing genius. This will go down in marketing history.

In the end, we think the hoo-ha will die down, similar to the attention drawn over the now-defunct “Anything” and “Whatever” drinks.

So relax guys, it doesn’t really matter what we call it.