With every constituency contested, the stage was set for a heated war of words between politicians of opposing parties. Many of them had very interesting and memorable things to say — we’ve picked out some of the best ones to remember.

At the Workers’ Party’s first rally, Pritam Singh unleashed a tirade on Goh Chok Tong who had earlier said that the PAP could “ownself check ownself.”

Next time, whenever you see someone going soft on someone from their own organisation/school/team/company/NS unit/neighbourhood, you can use this phrase.

2. “The rooster goes around boasting that its crow causes the sun to rise.” 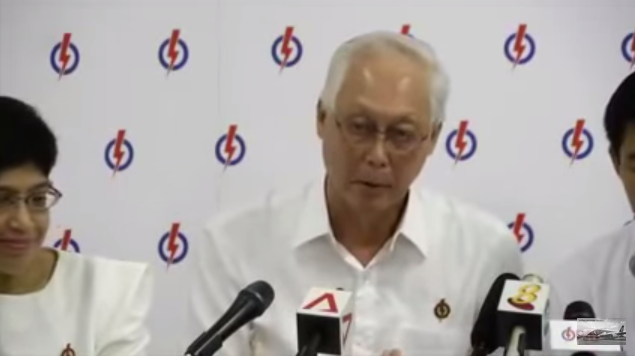 ESM Goh commented that the opposition parties were like a rooster who thought that its crowing caused the sun to rise. But, of course, the sun rises every day whether the rooster crows or not.

In other words, in ESM Goh’s view, they thought that they had made changes in Singapore, but the changes were not because of them. 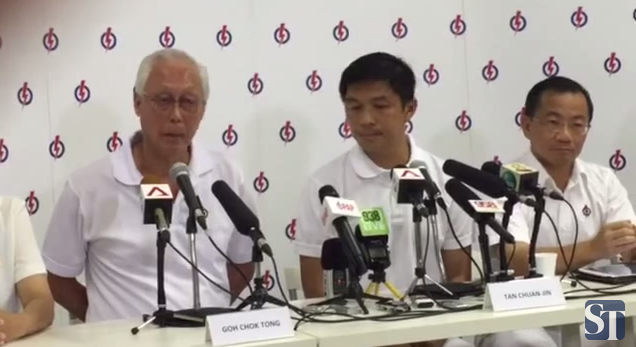 Opposition parties come and go like nomads. Nomads will not have interest in the people’s welfare. They are looking for plunder.

This was later countered to comedic effect by opposition party members all over the island, including Mr Yee Jenn Jong, who had stayed in Joo Chiat all his life and then suddenly found himself in Marine Parade even though he had not moved house.

NSP’s Cheo Chai Chen showed the MCP (no, that’s not a party) in him by proudly announcing that Tin Pei Ling being a mother was a ‘weakness’.

When the results were out, Cheo got just 150 votes, or 0.82% of the vote share. We’re not sure if this was because of his errant comments or whether he was already unpopular in the first place. Maybe both. 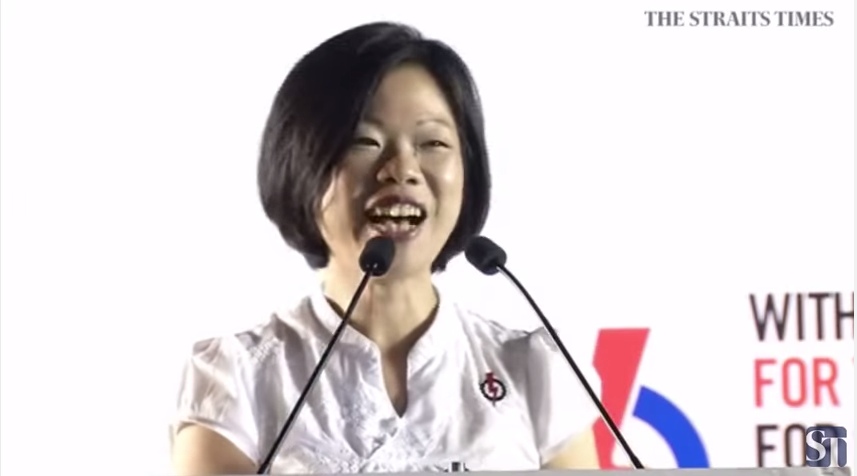 Whether it was intended to be deliberately vicious is up for debate, but one thing we do know is that Sim Ann will be associated with the phrase ‘chut pattern’ for the rest of her political career.

6. “Hopefully, one day Tharman will lead the opposition.” 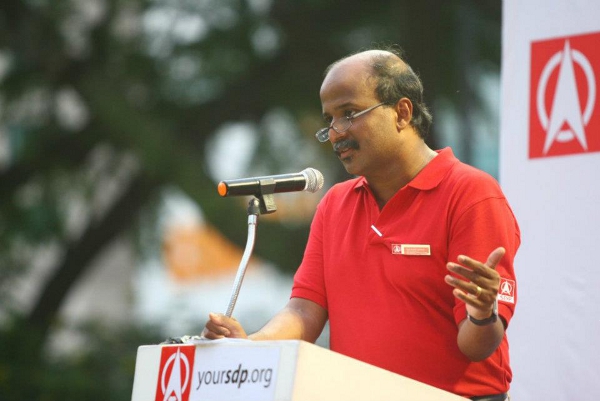 Many of us in the alternative parties hope that one day DPM Tharman will have a falling out with PM (Lee Hsien Loong) and will come out to lead a grand coalition of opposition parties – Pakatan Rakyat Singapura! – to present a real alternative to the current PAP (People’s Action Party) government.

Who knows? In politics, anything can happen. 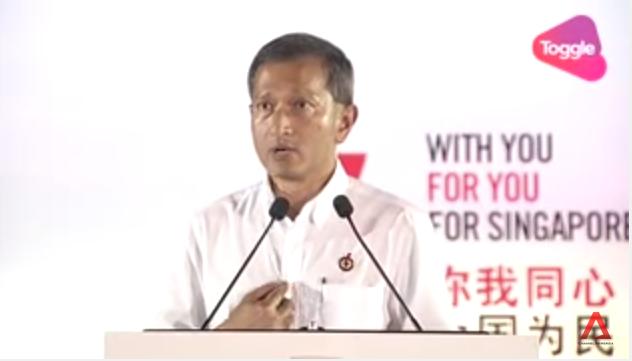 There was a lot of back-and-forth going on in Holland-Bukit Timah. Dr Vivian said at a rally that the PAP “do not have a history of backstabbing their mentors”. This was a veiled swipe at Dr Chee who had a falling out with his mentor Chiam See Tong in the 1990s. 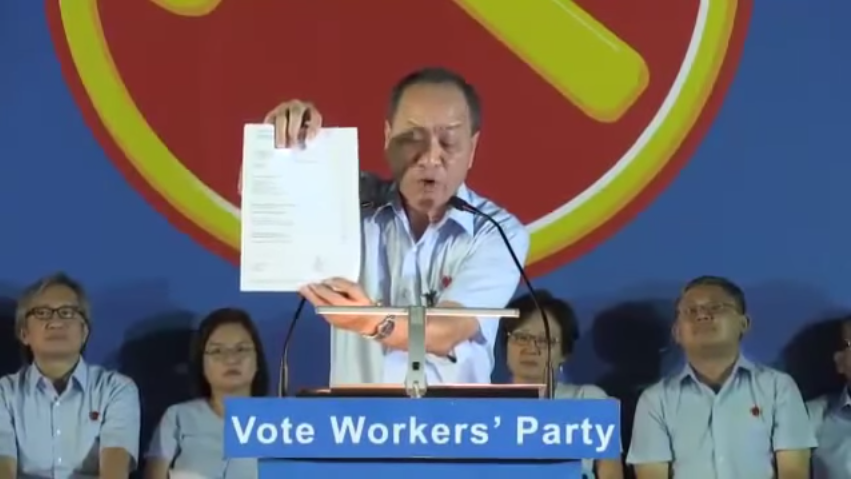 A worked up Low Thia Khiang brandished a paper report in front of thousands of rallygoers, saying that Punggol East was in a deficit when the Workers’ Party won it in 2013. The paper showed that Punggol East had a deficit of $280,000. He asked loudly in Mandarin, “Now I want to ask the PAP, where is the money??”

Now that Punggol East has gone back to the PAP, it’s going to be a total nightmare for the people accounting the books.

Also, the ad reminded us of a young Chua Enlai (oh, the nostalgia!): 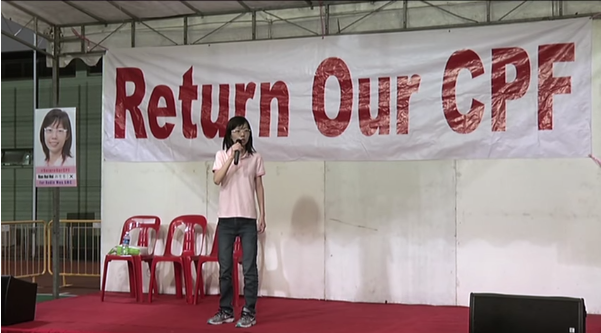 Although they might have been running in different parties, the message they brought was the same: We Want Our CPF Back. We don’t think this is the last we’ll hear from either of them, as they seem to be very determined people.

At least they’re fighting for a cause they believe in, and we respect that.

Enough has been said about this one, so we’ll just leave you with this video of Mr Choong. Actually, although the entire video is 36 seconds long, ‘boo to PAP’ is the only part we understood. Also, a ‘tall order’ is his middle finger??

Moral of the story: Next time you’re feeling a little tipsy and have a bit of ranting to do about politics, you know what to say.

Remember to bang the podium with gusto when you’re done.

That’s one message that certainly got across to the Ang Mo Kio voters.

So this year we celebrate SG50, and I am thinking, if my father didn’t get on the boat to Singapore, I might be a China citizen.

Well, he did win East Coast when it was looking pretty ominous at one point, and the tension over his comments seem to have died down. So no doubt he must be thinking in private, ‘heng ah’.

“Why do you want to vote for Sam Tan? Because he gave you S$10 voucher?”

“Reporters ask me why do I not have garlands? I say I am not a vase, why give me flowers?”

Han Hui Hui just telling it like it is. She don’t need no flowers.

Who: Dr Vivian Balakrishnan and the people who designed his flyers 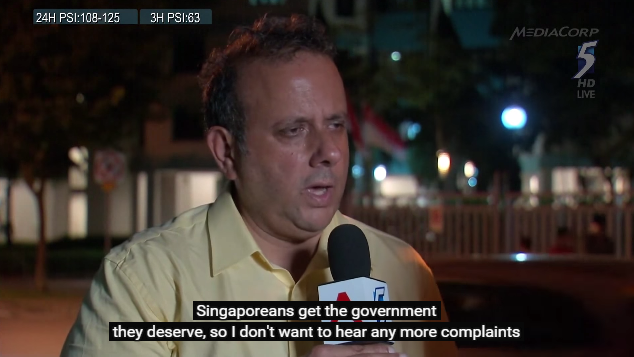 After the sample counts had been released, a less-than-happy Kenneth Jeyaretnam told Singaporeans to stop complaining since they voted for the PAP in such high numbers.

So next time if you hear your friend complaining to you, quote them this witty one-liner from the Reform Party Secretary-General himself.

The election may be over, but these are quotes that we’ll remember for a long time. One day, the quote may even become more famous than the person who first said it. Who knows?