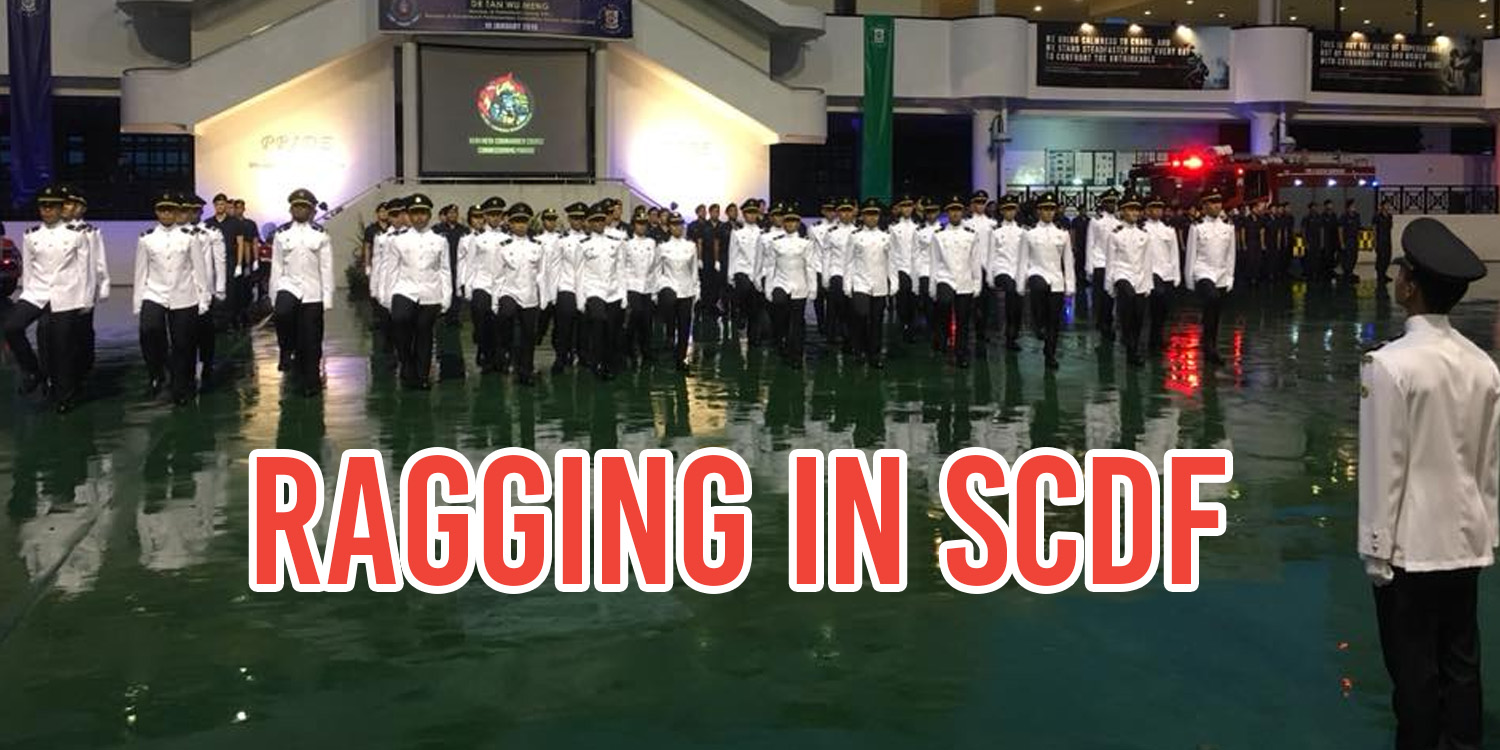 SCDF’s Ragging Culture Is Deep-Rooted And Difficult To Weed Out, Say Former Servicemen

The death of Corporal (CPL) Kok Yuen Chin on Sunday (May 13) has shed light on several dangerous practices in the 6,000-strong Singapore Civil Defence Force (SCDF).

CPL Kok passed away during an ORD “celebration”, during which he somehow ended up at the bottom of a 12m-deep well.

He was allegedly involved in a hazing ritual, commonly meted out towards the end of an NSF’s service.

CPL Kok’s death comes on the heels of another NS-time death in April.

Channel NewsAsia (CNA) reports that hazing rituals are common in the SCDF, where a “deeply ingrained culture” of ragging still exists.

This is despite such practices being offences punishable by law.

According to servicemen, these practices are used to mark milestones like enlistment, ORD and retirement, in the case of regulars.

But it goes beyond chugging a few pints at a bar.

CNA reveals that ragging rituals in the SCDF range from dangerous to plain bizarre.

Based on Internet chatter, we suspect that this is true in the other uniformed services (Singapore Police Force and Singapore Armed Forces) as well.

Here are some disturbing ways in which uniformed personnel are hazed:

It was during this activity that CPL Kok is said to have passed away. It entails pushing servicemen into a well filled with algae-covered water.

A serviceman that CNA spoke to said that around 10 years ago, all personnel completed this ritual before their ORD.

He added that there was a ladder available for the men to use, which made him question how CPL Kok could have drowned.

But one can’t help but wonder – how useful is a ladder when you’re being pushed into a well?

Well-known by NSmen of the ’80s and ’90s, this involves covering a target with a blanket before beating him up.

The blanket keeps the attackers’ identities anonymous, so the victim has no idea who inflicted which blow.

But a thread on SGForums from 2008 suggests that the practice has gone out of fashion in recent years, at least in the Singapore Armed Forces.

Everyday items can turn into weapons of torture in the hands of NSFs.

Others have servicemen squeezing tubes of toothpaste “everywhere”, including inside personnel’s underwear.

The most dangerous – and bizarre – of these is perhaps when they insert batteries into a person’s anus.

This was famously used as a method of torture by two British boys who killed a two-year-old boy in the early 1990s.

Worryingly, servicemen that CNA spoke to didn’t see the danger of such activities. A 27-year-old former serviceman said confidently,

The aim of the practice is mainly to humiliate rather than cause danger to a person.

Ragging was, and I’d like to believe still is, meant to be a good-natured way of fostering a sense of brotherhood, cohesion and team bonding amongst the firefighters.

And that’s probably why turnouts and ragging continue in our uniformed groups, despite the latter being outlawed.

The offence can carry a term in the SCDF Detention Barracks or affect a regular’s promotions and bonuses.

And no one can call servicemen ignorant of these penalties. According to the SCDF, commanders are regularly reminded not to participate in unauthorised practices.

But as the tragedy of CPL Kok shows, such reminders and punishments do little to deter these practices.

As this ex-firefighter put it,

Ragging as a practice has been cemented as part of the SCDF psyche, and is unlikely to go away anytime soon.

Uniformed groups often have “safety timeouts” following accidents. These give them a chance to take stock of their safety procedures.

Maybe it’s about time that they had a “culture timeout” as well.