Must Share News – Independent News For Singaporeans
Home People Social Issues 10 Reasons Why Singaporeans Are Unhappy, Because Even Asia’s Happiest Country Has... 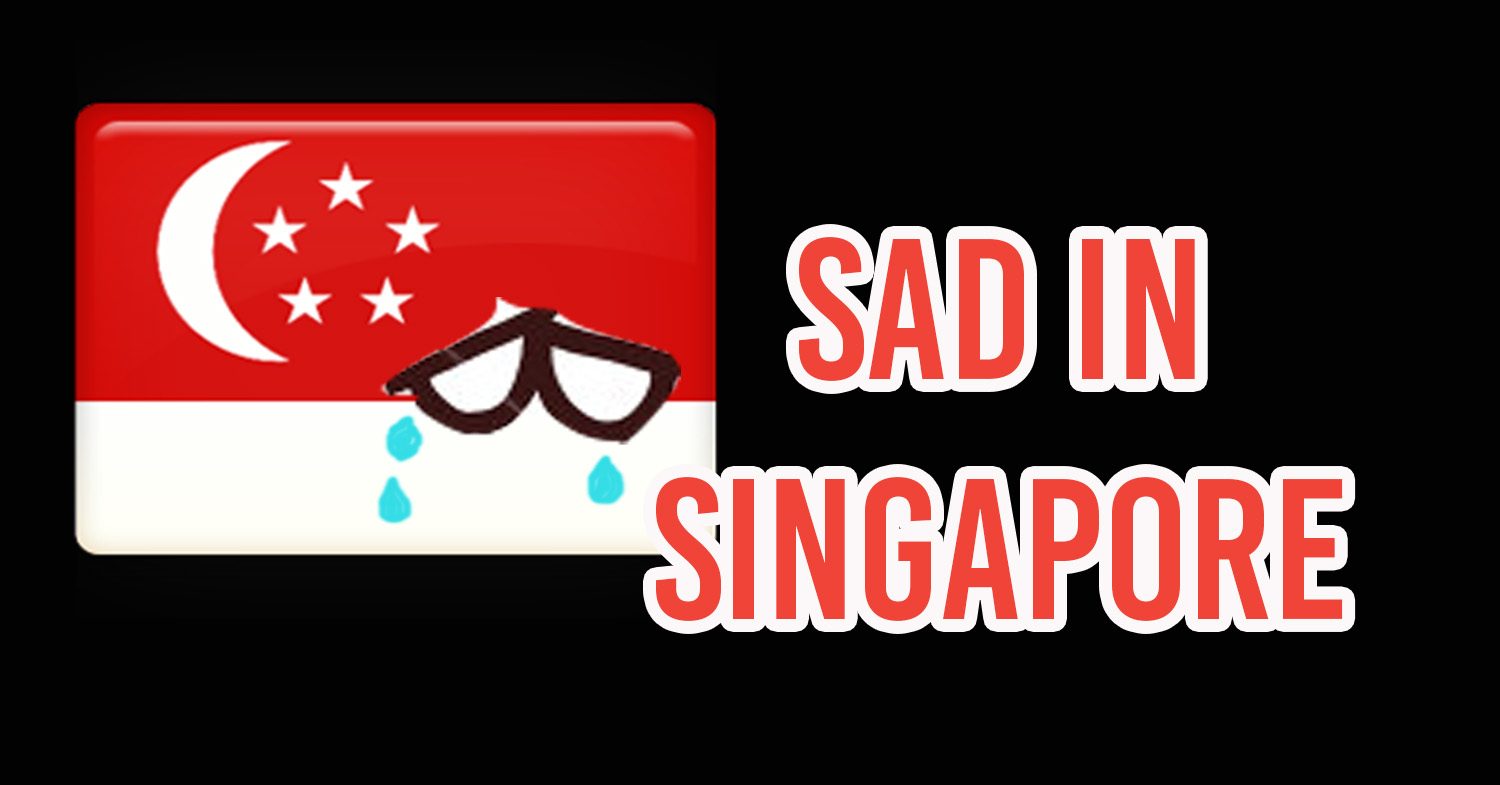 To those from other countries, there seems to be almost no reason for Singaporeans to complain. We’re a first-world country, our education system is lauded, and we revel in our relatively low crime rates. Such that a United Nations survey even recently ranked us the happiest country in the Asia-Pacific.

But just because we are supposedly the happiest country in the region, doesn’t mean there are no unhappy people here.

Some pioneer generation stalwarts who have lived through the bad old days of war, riots and attap houses with no indoor pluming may wave their walking sticks and demand to know which bratty ingrate millennials dare to say that they are unhappy.

While it’s true that stability, creature comforts and convenience in Singapore have improved since the old days, other monsters have reared up to take their places.

Beyond the guise of Singapore, the Clean and Green city with our skyscrapers and National Day fireworks, lies the numerous foibles of Singaporean society, carefully shrouded from our sight and stemming from a mixture of consumerist and Asian values.

Here are some ways that Singaporeans lead miserable lives, gleaned from a thread in Reddit.

What consumes Singapore is a cesspool of greed and pursuit of a consumerist fantasy that’s marked by its unique mindlessness.

Singaporeans don’t even realise why they’re getting caught in this struggle, they just hurl themselves into the race simply because everyone is doing it, and they use others as a benchmark for so-called “success” that simply means elevation of social status and accumulation of material goods. For example, kiasuism, where Singaporeans become unnecessarily competitive because they don’t want to lose out to others in some way. 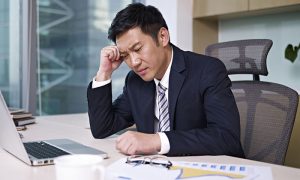 Children aren’t spared from this rat race either — they’re immediately made to take life-changing exams like the PSLE from an age as tender as 12, and parents also compete to send them to “branded” primary schools.

To ensure their children flourish within a system that values your existence according to your academic results, parents send their children for tuition and other enrichment lessons. When combined with their already extensive school hours, this leaves children occupying themselves with studies most of the time, which is anything but a healthy childhood.

Witness these unhappy people lamenting about their not-so-stellar results: 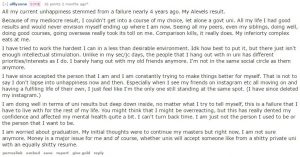 This leads to the next point. In light of all the emphasis on going to “branded” schools, an elitist society is an inevitable result.

And the by-product is the unhappiness of those who are deemed unworthy:

What’s wrong with driving a cab, even if you’re a degree holder? It’s a decent job too. But elitism is the reason why this commenter finds it so malu.

What schools do most of our leaders come from? And during an election, would the average Singaporean be more likely to vote for someone who came from Raffles Institution or Jurong Junior College, academic qualifications and occupation being similar? It really shouldn’t matter because the individual’s vision and policy ideals should be the priorities influencing the vote. But you know in your heart that half the nation will chose the Raffles candidate.

Still not convinced there’s elitism and snobbery in Singapore?

Just take a look at this blog post by a Singaporean who’s had experience with an elitism. She admits that people get judged for their results and also affirms how children from elite schools are more privileged and receive better resources and opportunities.

Character wise, I don’t really like the attitudes of some of my acquaintances from top JCs. There is this whole elitist mindset and judging people for their achievements thing going around.

I even had schoolmates who told me things like they will not consider dating a girl or guy who scored 9 points and below for their L1R5 in O levels. At inter-JC events, I have encountered many students who ask my JC and credentials before they ask my name.

She isn’t above being elitist herself, stereotyping neighbourhood school kids as being less intellectually inclined and occupied with trivial things.

When I mixed with the neighbourhood kids, topics revolved around things like Maplestory, Gunbound, how to look nice, how to be slim, which senior they like, popular culture etc. When they grow up, ‘maplestory’ and ‘gunbound’ changes to things like KTV or clubbing.

3. No Freedom To Be Yourself

There’s a high emphasis on competition and setting aside your individuality for material success. And as if that wasn’t miserable enough, if you don’t attain the grades you’ll most likely be looked down on.

A Singaporean who loves studying literature will be laughed at and told to study something “practical” like medicine or banking. Somewhere right now, a budding Singaporean singer is being told to be realistic and to focus on their studies.

So what if we got the degrees, but nobody’s using their head.

This could explain why some Singaporeans are unhappy and depressed.

Singapore has just been ranked as the most expensive city for expats for the 4th year running, reported Today.

The general cost of living in Singapore has skyrocketed over the years. And it doesn’t help that Singapore doesn’t provide unemployment/welfare benefits.

The cost of even owning a car is exorbitant, amounting to about $53,000 (excluding the cost of the car).

The cost of housing has also been spiking. And recently, the cost of water and public transport as well.

It’s no wonder that some Singaporeans are ranting about working hard, but still not having enough money.

National service is an integral part of Singapore’s defence. That said, it’s no walk in the park for young teenage guys. Read our story about the difficulties recruits face during NS.

And NS has resulted in many youngsters feeling unhappy.

Even those exempted from serving NS may be unhappy:

Many Singaporeans feel unhappy due to relationship problems, or the lack of a relationship. That may be universal, but for young people, their love lives can be made more difficult by the guy having to go for national service and lack of privacy as many unmarried Singaporeans live with their parents.

The state does not recognise such love. In fact, it’s criminal, according to Section 377A of the Penal Code.

Remember stories of forbidden love from the old ages like Romeo and Juliet? Yeah, that’s their life now.

Singapore also suffers from a grave case of apathy, and oftentimes discrimination, towards those who suffer from mental problems.

About 1 in 10 Singaporeans have mental illness, according to a 2010 study, with the most common ailments being depression, alcohol abuse and Obsessive Compulsive Disorder.

However, many cases go unreported and they have to shoulder their sickness alone.

It also doesn’t help that there’s a stigma against people who seek help for mental illness, and people aren’t encouraged to even say they are depressed or even unhappy.

It is a worrying statistic that self-harm and suicide levels have been increasing from 2014.

Maybe it’s due to the rapid pace of change, the influx of foreigners, the lack of human engagement due to the rat race, or a combination of these factors, but many people just don’t feel any sense of belonging to Singapore.

No family is perfect. Sometimes you just hate your family members, but ultimately they are supposed to be there for you when you need them.

But in the meantime, pressure and expectations from your family can get too much, resulting in unhappiness:

And just when we thought there was absolutely nothing they could take from us, they  destroyed the dab for Singaporeans forever.

Living in Singapore isn’t the walk in the park that it’s often portrayed as, and we need to recognise that there are people who are unhappy here, and it may be due to what Singapore society is like.

Instead of portraying Singapore as paradise that’s one of the happiest countries in the world, let’s be open enough to acknowledge the problems, and think of what we can do about them so more people will be happier.