Enter the Monte Carlo of Asia

Sentosa Cove – one of Singapore’s swankiest addresses that many covet. The luxurious Singapore enclave is reserved for the city-state’s elites, and is the epitome of living the high life. Think luxury waterfront bungalows with a breathtaking sea view, with supercars like Ferraris, Porsches, and Lamborghinis adorning the driveways.

Ever wondered who stays in Singapore’s resort-playground for the rich?

Here’s a look at 11 residents of Sentosa Cove. 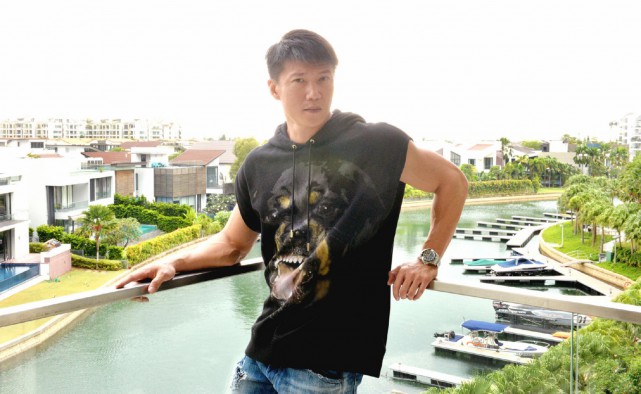 The new kid on the block, founder and owner of Martial Arts School Wufang Vincent Ng’s got the ultimate bachelor pad in Sentosa Cove. Ng spent about $100,000 on refurbishing the 1,600 sq ft unit. The unit features three rooms — a study room or “office”, a guestroom, and Ng’s bedroom, which has a small balcony with a sofa.

The first thing that greets visitors is a giant wall poster of Ng in a flying kungfu pose. Another wall is decorated with a portrait of a warrior in style similar to Chinese ink painting. 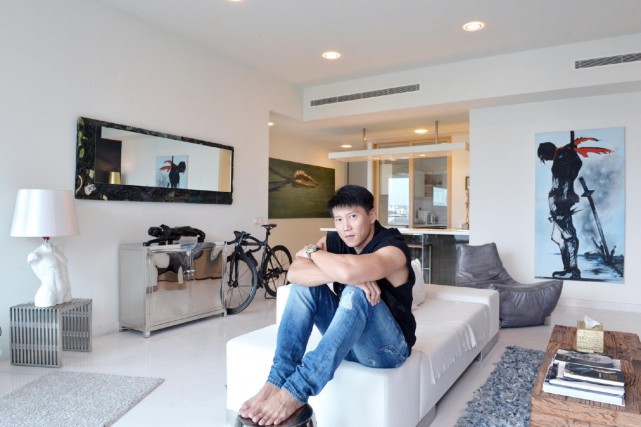 Ng also has a trio of Transformers toys on display, so now we know who’s a fanboy. On why he decided to make his home in Sentosa, Ng said:

Because I love this type of lifestyle. I love the sea and boats; I value my space and privacy; and I love to exercise. I can cycle and run outdoor here, and even take a boat out to sea – I have a licence to captain a boat.

The 39-year-old is only short of a woman to give him a complete home. Ng said he’s ready to start a family and already has someone in mind. 😉

Ng might be an ITE graduate, but this goes to show that schools do not determine one’s life after all.

In 2011, celebrity hairstylist Addy Lee upgraded to a $3.3 million three-bedroom condominium unit of 1,700-sq ft at The [email protected] Cove. The CEO of Monsoon Hair Group earns five figures a month, with 13 hair salons in Singapore and Malaysia and owns one haircare line. He is also the chief hairdresser of celebrities like Quan Yifeng and Michelle Chia.

He previously stayed at a 1,000-sq ft apartment at Bayshore Road that costed $800,000. His second $1.65 million apartment at Meyer Road was 1,300-sq ft. When Lee sold his second apartment, he made a six-figure profit.

Seeing his home as a haven, Lee splurged on renovating and furnishing it.

Here’s a quick breakdown of his furnishing’s costs:

I love to entertain friends at home because I charge too much to my credit cards when we go out. So I wanted a good sofa and TV set. 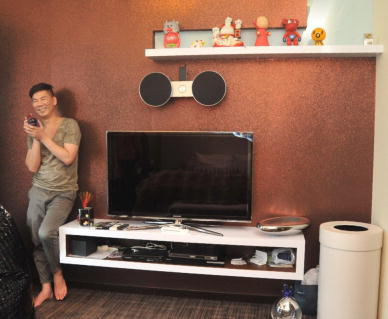 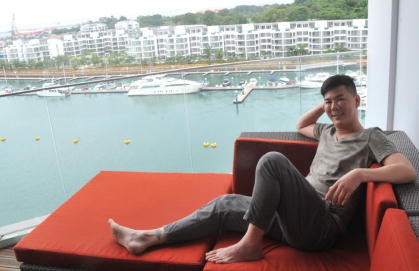 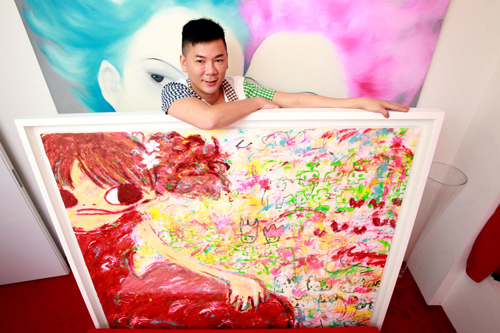 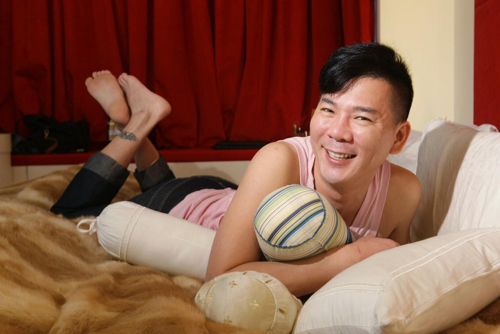 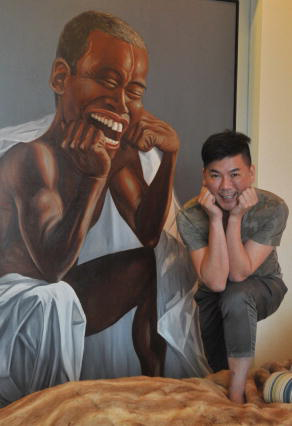 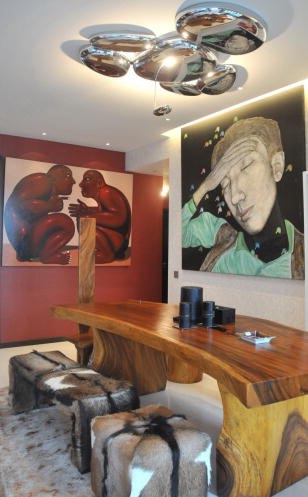 *All photos from source

Coincidentally, Lee’s neighbour at The Oceanfront condominium is Kong Hee, but Lee said he was unaware that Kong and his wife Sun Ho were living in the same estate. Lee also said that they have never crossed paths at Sentosa Cove, although he has known Ho for over 10 years. 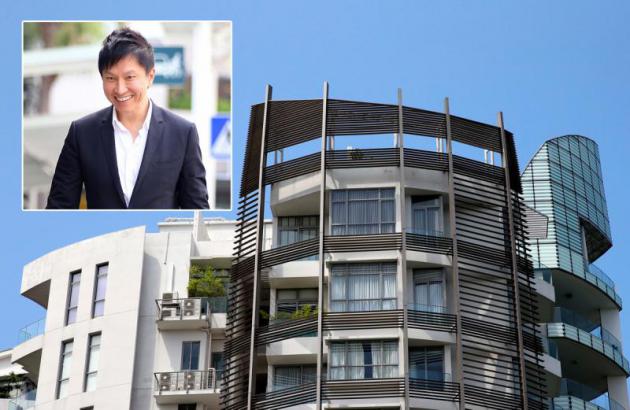 Kong Hee and his family had their humble beginnings — they used to stay in a five-room HDB flat in Tampines, which they purchased for $127,000 and later sold for $420,000. The Kongs then bought a Horizon Towers unit in River Valley with two living rooms, four bedrooms, a compact kitchen, and a private lift. In 2010, they sold the apartment and bought another at The Suites at Central on Devonshire for $2.6 million.

His 5,242-sq ft penthouse at The Oceanfront, which comes with a huge rooftop infinity pool and a view of the upmarket One Degree 15 Marina Club, was bought for $9.33 million in 2007. It comes complete with a private lift and four rooms on the first level, including a master bedroom.

During trials, the court heard that the pastor co-owned the penthouse with Indonesian tycoon Wahju Hanafi, who each paid monthly installments of $17,000.

An anonymous investor who visited the unit described the penthouse and its furnishings as “lavish and opulent”, and gave him “the impression that the owner sure knows how to enjoy the high life”. Singapore’s most hippie couple lives on a boat.

Among a handful of Singaporeans with an address on water, the couple’s three-room Lagoon 400S2 catamaran is currently docked at ONE°15 Marina Club at the Sentosa Cove marina. This catamaran was upgraded from their previous $300,000 two-room Beneteau Oceanis 37 yacht.

Together with their four children, the Lims plan to sail the high seas next year, in a year-long sea voyage to Okinawa. The environmentally-friendly house is made of wood, steel and lots of glass. The house features a living room, three bedrooms, and three bathrooms.

Nonetheless, the real showstopper is the 10-ft saltwater swimming pool with an infinity edge that looks out into the ocean. With its open concept, dwellers and guests can plunge into the pool straight from the veranda since there are no walls or glass in the way. Watch in envy as Fisher shows us around his million-dollar home:

Ah, it’s no wonder that tech site Gizmodo named Fisher’s house one of the most relaxing homes in the world.

In July 2012, The Business Times reported that an entity linked to Australian mining tycoon Gina Rinehart’s Hancock Prospecting purchased two apartments in the Seven Palms Sentosa Cove condominium – a unit on the third floor of the four-storey complex for S$23.3 million and another top-floor unit for nearly S$33.9million.

Hancock Prospecting later confirmed that Rinehart owns the two apartments. It is believed that her luxury apartments are for her getaways, rather than a permanent abode.

Rinehart is Australian’s richest person, with a net worth of $10.3billion.

Last November (2014), Spanish tycoon Ricardo Portabella Peralta became neighbours with Rinehart after he made a high-profile transaction in Sentosa Cove.

Peralta is the Chief Executive Officer and Vice-President of Board of Directors at Ventos SA, a Luxembourg-based investment holding firm.

He reportedly bought two adjacent units at Seven Palms Sentosa Cove for $28.55 million, or $4,131 per sq ft (psf), a record price for the island since Rinehart’s purchase.

In 2012, Nathan Tinkler sold his home in New South Wales, Australia, and moved to Singapore with his then-wife and four children. This was in a bid to recover his business finances by selling assets to repay debts, as Tinkler revealed that most of his past deals’ financing came from Singapore.

The mining magnate then rented two adjacent homes in expat haven Sentosa Cove. His twin homes had never been occupied, a prerequisite during Tinkler’s search for a property. Tinkler eventually settled on one of only 40 official Good Class Bungalow (GCB) areas, an understated title kept for Singapore’s most elite properties in designated locations with a minimum 1400 sq m.

In his driveway sits a Porsche, while a Maserati relaxes in his neighbour’s garage. Property developer Christopher Comer has an eye for real estate and its worth, and refrains from investing in property in Singapore as he sees few bargains.

The Chief Executive Officer of Singapore-based property developer Castlewood Group moved from Britain to Singapore 17 years ago, left and returned again in 2000.

Home for Comer is now a rented unit at the Oceanfront condos on Sentosa Cove.

Although he appreciates the privacy, space and openness of the apartment, Comer “could never justify” spending the money to buy it, as he is worried about a significant dip in value when there is a downturn. His $10.5 million penthouse of around 5,000 sq ft in Sentosa Cove, which is ‘right by the sea’, is his weekend home from the city’s hustle and bustle ‘to read and to meditate’.

The most unlikely occupants at Sentosa Cove ever – the otters!

Not only do they not have to fork out a dime, they also help themselves to free buffet in the area – one with a price tag so hefty even Sentosa Cove dwellers may not indulge in.

Perhaps they were otterly pleased to have moved into the waters of Sentosa Cove – their hearty appetite has resulted in missing Kois, the most expensive one reportedly worth over $80,000. They’re also suspected to have stomached $164,000 worth of Kois.

In March 2015, a Sentosa Cove unit was sold at a loss of $1.2m. Property prices there have also been estimated to have dipped by 18-36% from their peak in 2011. Sentosa Cove was conceptualised to be one of the world’s most upmarket marina residential communities, and attracted many of the world’s super rich.

However, transaction volume has dropped significantly following the government’s introduction of a series of property cooling measures.

With the falling prices, this might just be the ideal time for you to invest in the dream home you’ve always wanted.

Well, one can always dream.