Must Share News – Independent News For Singaporeans
Home People Social Issues Restaurant Says It’s Not Racist Despite “Sarcastic” Reply To Customer, But Has... 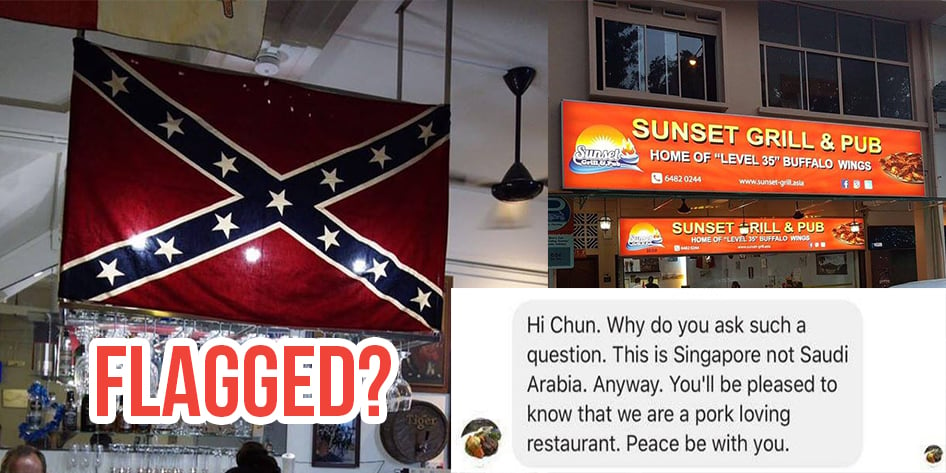 Sunset Grill & Pub’s PR person has finally woken up, after it was slammed online for its insensitive reply to a customer who asked whether it served halal food.

On Monday (Aug 7), the restaurant and bar that’s famous for its buffalo wings issued an apology to Ms Chun Fong Avril and Singaporeans on its Facebook page over the incident. 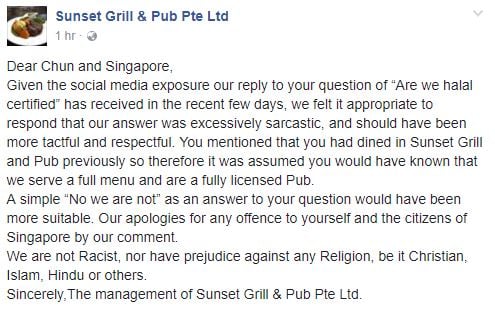 However, MustShareNews noticed something interesting in a photo on its Facebook page. It shows a Confederate Flag being hung in its premises — an item with links to racism in the United States. 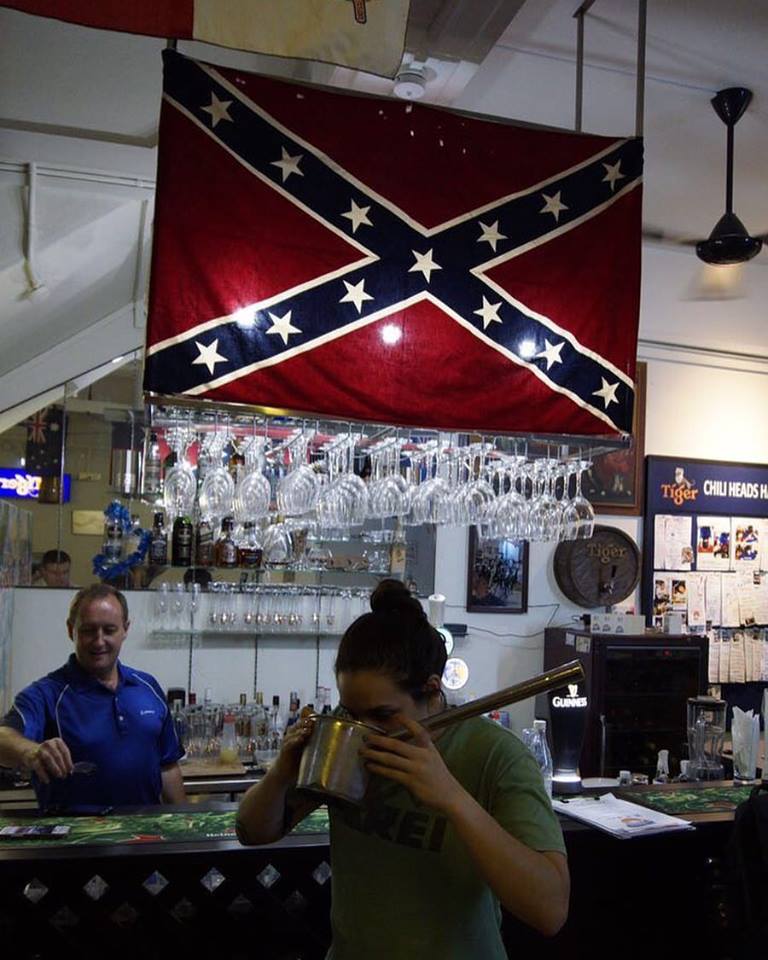 How did this incident start?

Ms Chun, a previous customer of the establishment wanted to recommend the pub to her Muslim friends, so she messaged the management on Facebook to enquire if their food was halal-certified but was shocked at the reply she received.

Here is a screenshot of the conversation. 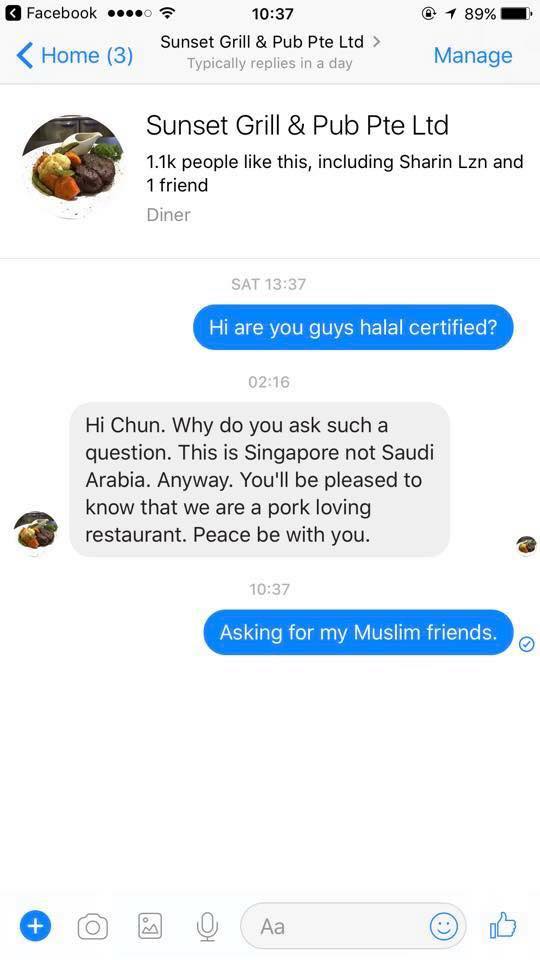 Why couldn’t it have answered with a simple “no”?

By saying  “this is Singapore not Saudi Arabia” the pub made it seem that Ms Chun’s question was absurd.

And worse still, it sarcastically added that it’s a “pork-loving” restaurant.

Singaporeans were pissed off and flamed the pub on its review page., which has since been disabled.

Instead of apologising there and then, it disabled its review page instead.

Bad move. Undeterred, Singaporeans took to commenting on the pub’s Facebook posts instead.

With more and more Singaporeans slamming the pub, the management team finally made an overdue apology.

Although the pub issued its statement of apology, not all Singaporeans were willing to let the issue slide.

Some readers like Mr Toh felt that an apology was insufficient, while others felt that it was merely a bad joke. 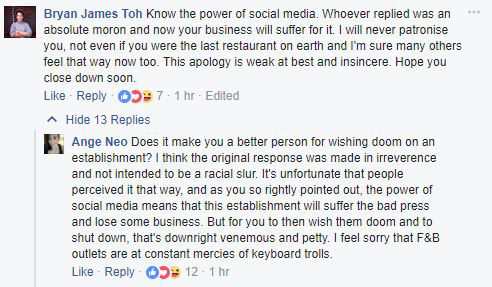 Other netizens argued that Ms Chun, being a former patron, should have known that the pub that sells alcoholic beverages was not halal — but that’s besides the point.

The point is the management’s answer — did it stem from racism or just a bad joke?

The Confederate Flag hanging in the restaurant might be a clue that perhaps the reply, which on the surface seemed to be a mere act of sarcasm, stemmed from a deeper racial prejudice.

The flag is prominently displayed, and unknowingly staff and patrons may even have taken a photo with it in the background. 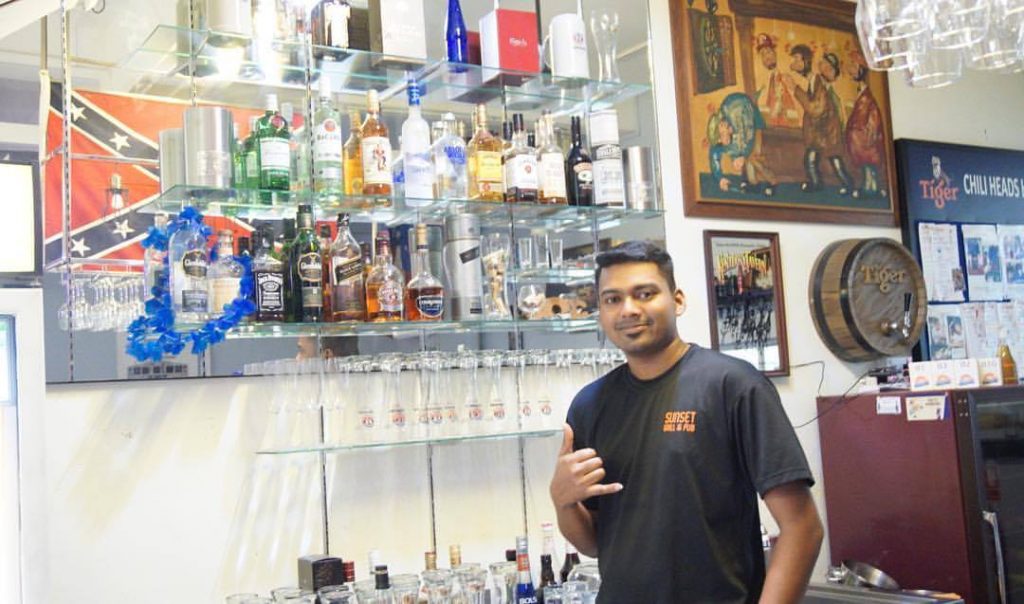 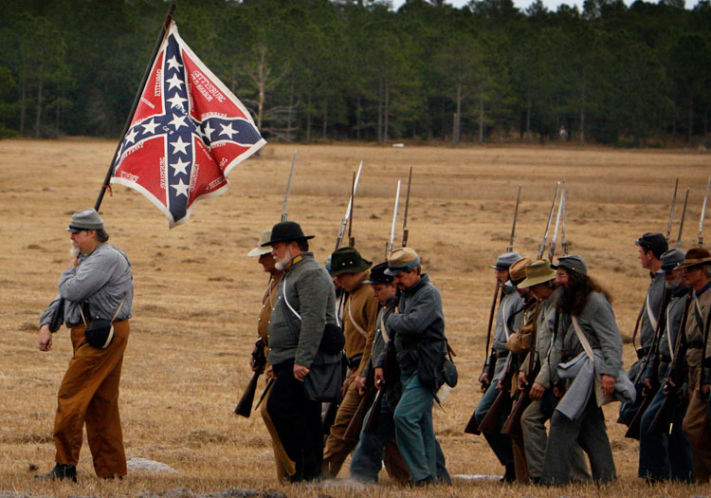 These states were in favour of retaining slavery in America, believing that the whites were of superior stock in comparison to African-Americans.

Since then, the Los Angeles Times has reported that the flag has become a symbol of racial extremism and “hate movement” groups like the Ku Klux Klan and neo-Nazis — even up till the present day.

The flag’s links to racism are embodied in mass murderer Dylann Roof, who was sentenced to life without parole earlier this year after killing 9 African-Americans at a church in Charleston, South Carolina in 2015. He was reported to have boasted of “racial beliefs and posed in photographs with Confederate flags and symbols”. Thus, the flag is considered a hate symbol and many people in the US have protested at its hanging at prominent government locations.

Singaporeans who know the connotations associated with the flag have voiced out their concerns at the display of such a symbol in Singapore. 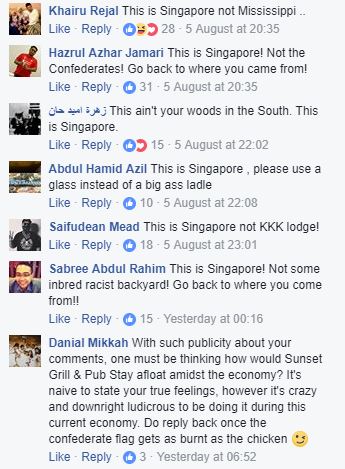 Some even equated it to the Nazi Swastika. 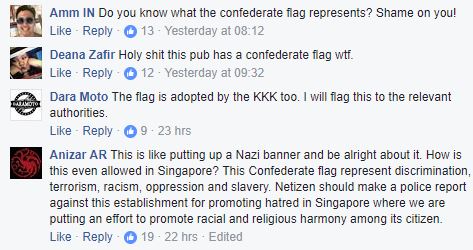 Is An Apology Enough?

With such a symbol of hate displayed prominently a pub that claims be not racist nor prejudiced against any religion, can we really take their apology to be truly sincere?

Singapore is a country that is familiar with racial violence, having gone through the racial riots of 1964. Since then it has worked hard to create a secular society that is racially tolerant. While peace has generally been observed, such issues must be treated with care and sensitivity.

While peace has generally been observed, we should be vigilant against hate symbols being displayed in our midst.

Another concern is that such a flag could be considered as “foreign influence”.

Should Sunset Grill & Pub thus take down their Confederate Flag? 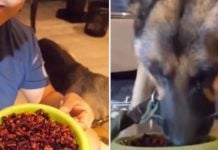 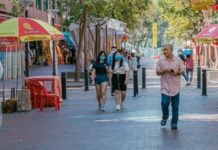