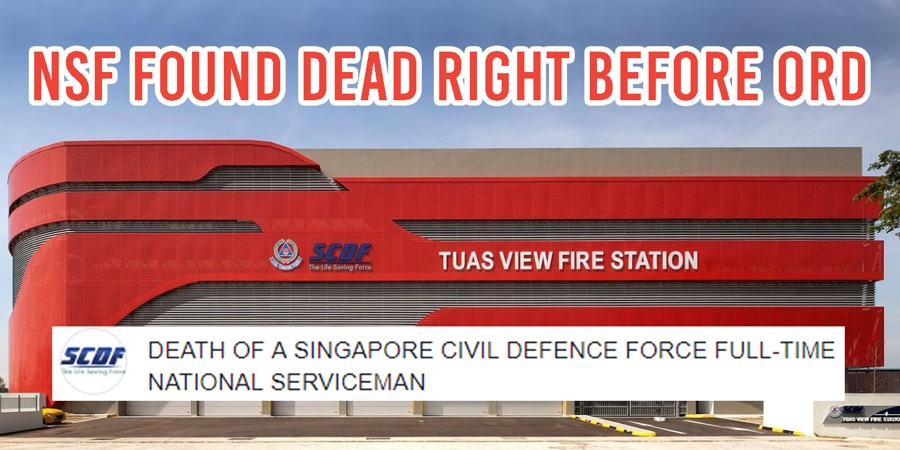 Another shocking NSF death has been reported. This time, he hails from the Singapore Civil Defence Force (SCDF).

CPL Kok Yuen Chin, a full-time National Serviceman (NSF), was found unconscious at the bottom of a fire station’s pump well around 9.20PM on Sunday (13 May).

The NSF was allegedly participating in “ragging”, as part of celebrations for his “impending ORD” with his squad mates.

He was pronounced dead at the hospital, and a Committee of Inquiry (COI) has been set up to look into what is now a police case.

Two SCDF regulars have been arrested, based on preliminary investigations. 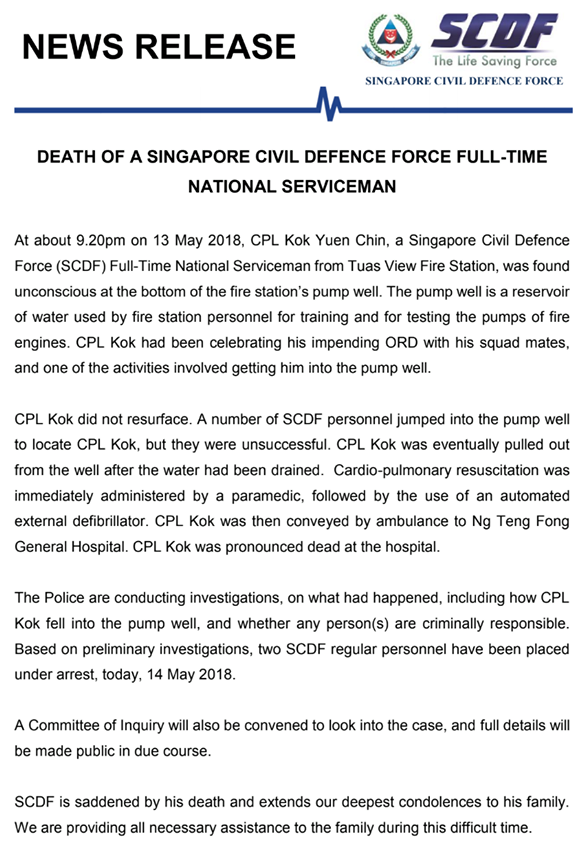 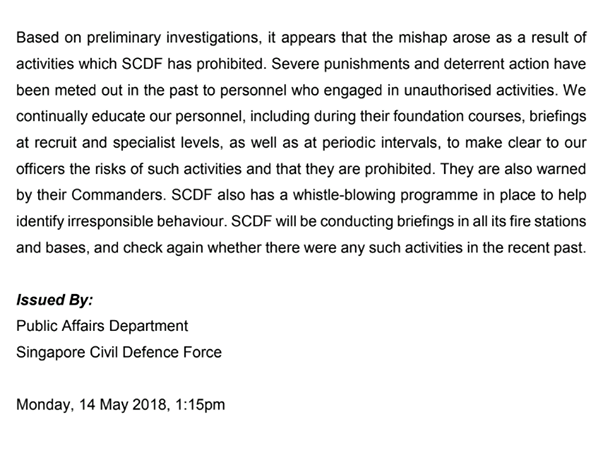 He had been celebrating his “impending ORD” with his squad mates.

The New Paper (TNP) understands the informal celebration had something to do with “ragging” activities.

Ragging activites, though prohibited by SCDF, typically involve acts like:

CPL Kok was made to participate to commemorate his final duty, according to TNP’s source.

One of the activities involved getting CPL Kok “into the pump well”.

TNP added that CPL Kok was allegedly “thrown into the kolam“, or pump well. However, CPL Kok did not resurface, unlike the other participants.

Several SCDF personnel jumped inside to locate him, but were unsuccessful in their attempts.

The water was drained from the well, and CPL Kok was found unconscious at the foot of the fire station’s pump well.

His body was pulled out and CPR was administered by a paramedic.

An external defibrillator was also used, and he was subsequently sent by ambulance to the hospital.

Currently, the police are conducting investigations into how CPL Kok fell into the well and if the people involved were “criminally responsible”.

Two SCDF regulars have been arrested as of Monday (14 May), based on preliminary findings.

As with the previous NSF death related to a training incident, a COI will be convened to look into the case.

SCDF promises that “full details will be made public in due course”.

They will be providing “all necessary assistance” to the family during this time.

Serious punishments if foulplay is involved

Based purely on preliminary investigations, SCDF said the incident appears to have happened during “prohibited” activities.

For now, they will be taking preventive measures to ensure similar incidents do not happen in the near future.

Severe punishments to act as as deterrence will be meted out to those who were involved.

And briefings will be enforced at “periodic intervals” to make clear to officers “the risks of such activities”.

Our heartfelt condolences go out to the victim’s family and friends in their time of loss.

We hope the investigation goes smoothly and that the truth will be uncovered soon.

At about 9.20pm on 13 May 2018, CPL Kok Yuen Chin, a Singapore Civil Defence Force (SCDF) Full-Time National Serviceman from Tuas View Fire Station, was found unconscious at the bottom of the fire station’s pump well.

The pump well is a reservoir of water used by fire station personnel for training and for testing the pumps of fire engines.

CPL Kok had been celebrating his impending ORD with his squad mates, and one of the activities involved getting him into the pump well.

CPL Kok did not resurface. A number of SCDF personnel jumped into the pump well to locate CPL Kok, but they were unsuccessful.

CPL Kok was eventually pulled out from the well after the water had been drained.

Cardio-pulmonary resuscitation was immediately administered by a paramedic, followed by the use of an automated external defibrillator. CPL Kok was then conveyed by ambulance to Ng Teng Fong General Hospital. CPL Kok was pronounced dead at the hospital.

The Police are conducting investigations, on what had happened, including how CPL Kok fell into the pump well, and whether any person(s) are criminally responsible.

Based on preliminary investigations, two SCDF regular personnel have been placed under arrest, today, 14 May 2018.

A Committee of Inquiry will also be convened to look into the case, and full details will be made public in due course.

SCDF is saddened by his death and extends our deepest condolences to his family. We are providing all necessary assistance to the family during this difficult time.

Based on preliminary investigations, it appears that the mishap arose as a result of activities which SCDF has prohibited.

Severe punishments and deterrent action have been meted out in the past to personnel who engaged in unauthorised activities.

We continually educate our personnel, including during their foundation courses, briefings at recruit and specialist levels, as well as at periodic intervals, to make clear to our officers the risks of such activities and that they are prohibited.

They are also warned by their Commanders. SCDF also has a whistle-blowing programme in place to help identify irresponsible behaviour.

SCDF will be conducting briefings in all its fire stations and bases, and check again whether there were any such activities in the recent past. 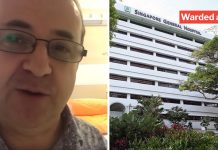