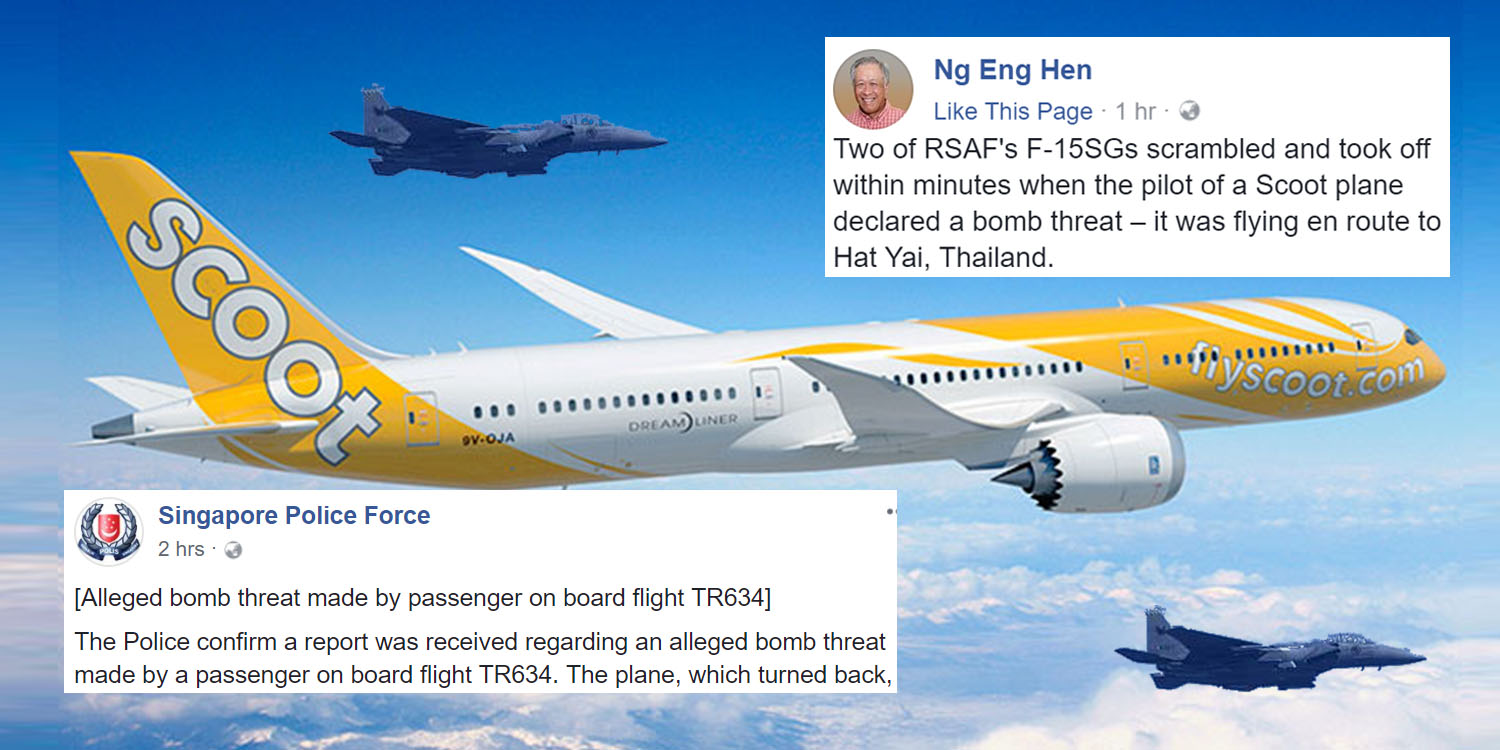 [UPDATE 5.37PM] Police confirmed that they “found no threat”, after conducting a check on the plane and the baggage of the three individuals. Scoot has also said that the flight has been retimed to resume its journey to Hat Yai at 6.30pm.

Did someone say the B word?

Budget airline Scoot was forced to turn flight TR634 bound for Hat Yai, Thailand back to Singapore after an alleged bomb threat.

What in the blazes happened?

At 4.22PM, the Singapore Police Force confirmed that a passenger made a police report on an alleged bomb threat while on the plane.

A bomb threat alert was then raised by the pilot while the flight was en-route to Hat Yai.

Following which two fighter jets were deployed swiftly to escort the plane safely back to Singapore.

Mr Ng said the F-15SG pilots closely escorted the Scoot plane from South China Sea, for a safe landing back at Changi Airport.

Police officers will be conducting checks on the plane and will update everyone on their findings.

Are the passengers & crew safe?

All passengers and crew from flight TR634 have been “disembarked safely” according to the police in their Facebook post.

Currently, the passenger who alerted the police, along with his two other travel companions, are assisting the police with investigations.

Scoot has also said that they are “working closely with the authorities for necessary follow-up” measures to ensure “the safety of our guests”.

But for our RSAF pilots who are on stand-by duties 24/7, every threat is considered real until proven otherwise. They keep us and our skies safe. Well done, The Republic of Singapore Air Force.

Kudos to the brave pilots indeed.

Although it must be a bummer for the passengers of the flight to Hat Yai, we think it’s better to be safe than sorry.

As this story is developing, we will update this page when SPF provides updates on their investigation.

You can read Mr Ng and the Singapore Police Force’s posts here in full.