Must Share News – Independent News For Singaporeans
Home Politics General Elections By The Minute: SDP’s Final Rally Of GE2015 Is All About Chee... 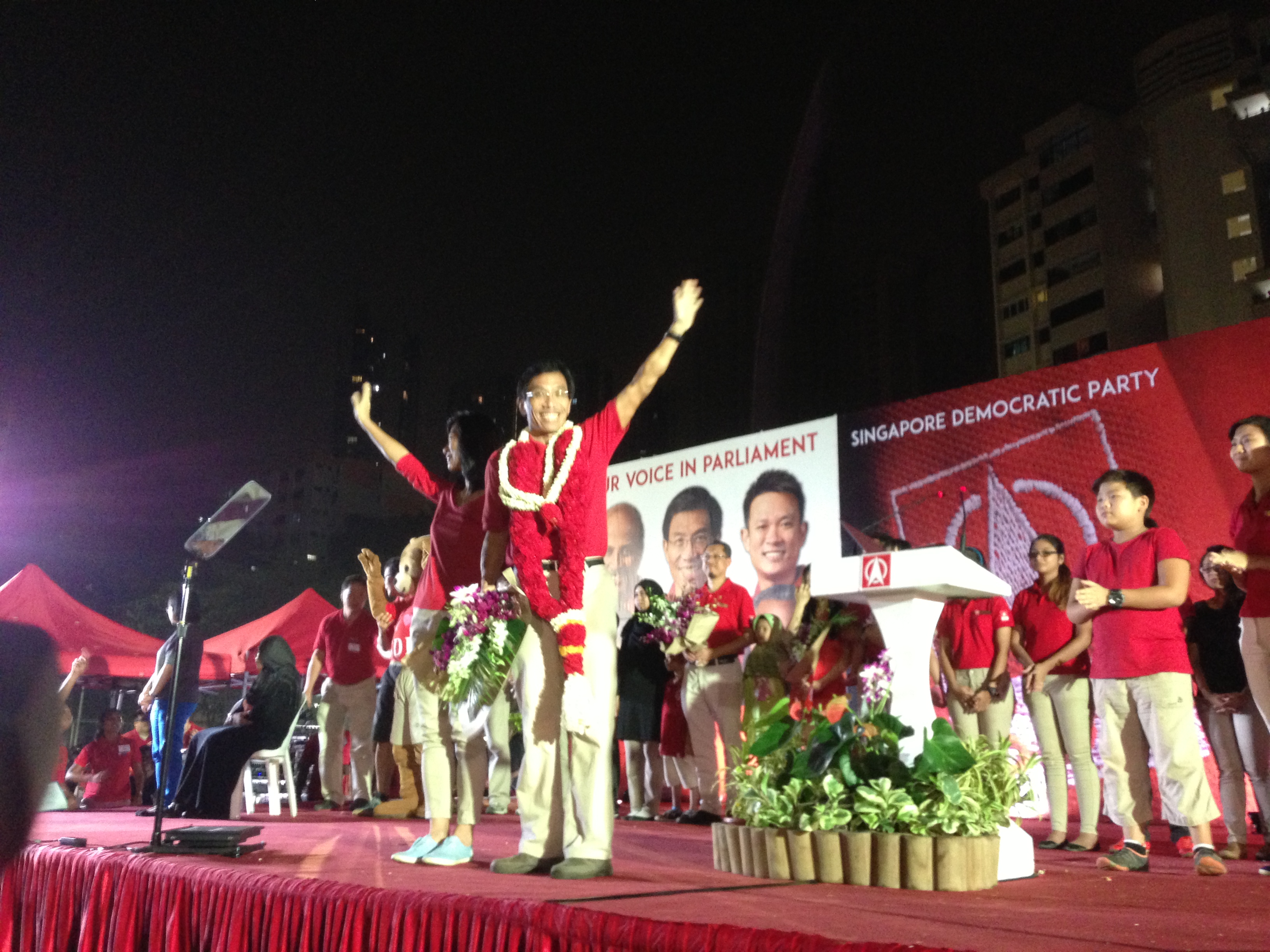 Chee Soon Juan is the epitome of the SDP

Today (9 Sept) is the last day for election rallies for all the political parties around Singapore to make a last ditch attempt to persuade voters.

I headed down to the Singapore Democratic Party (SDP) rally for the first time to find out what’s the big deal about Dr Chee Soon Juan and his comrades.

6:30pm
I was early, the rally site was relatively empty — 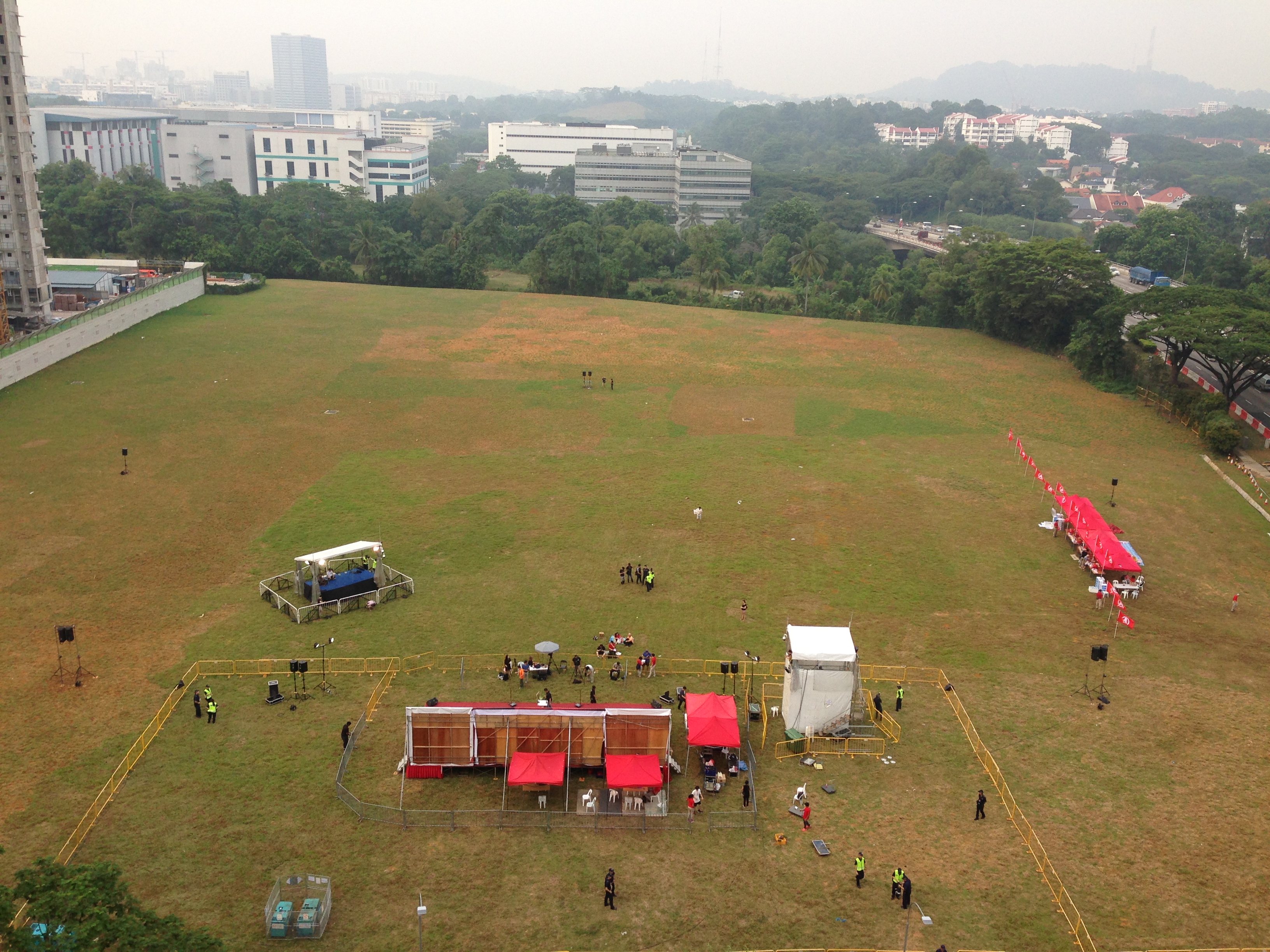 I head to the media box to get myself ready and hyped up by the first SDP rally. There were already small groups of people moving in to chope a good spot for the rally — 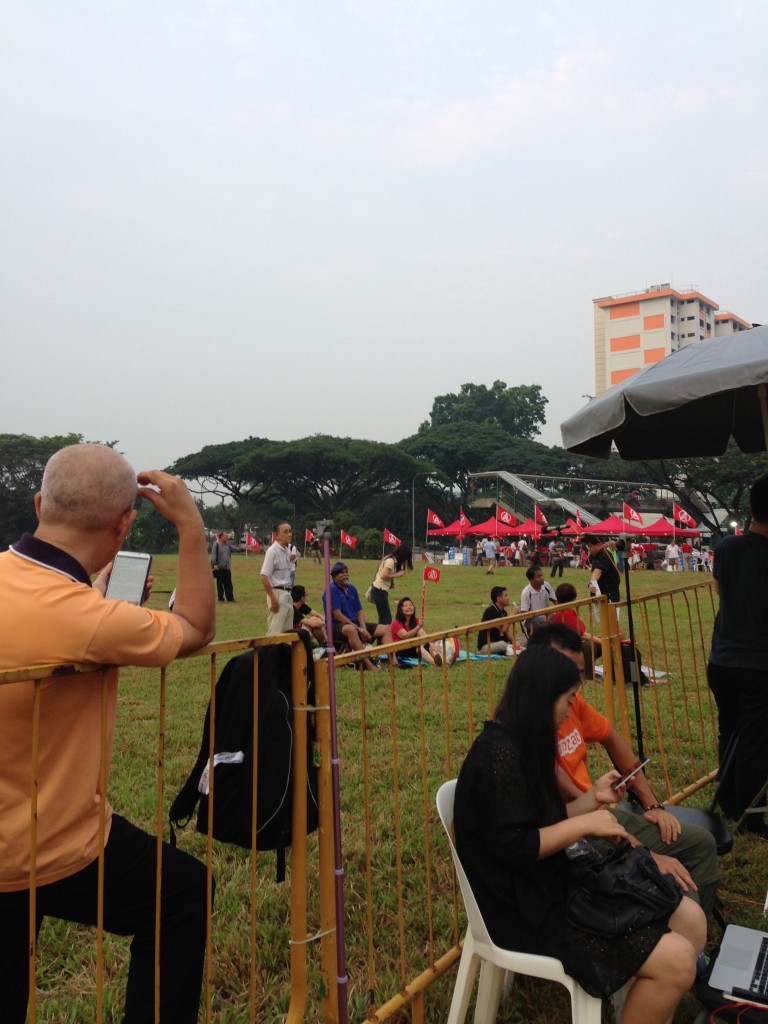 I have to admit: the cameras from the mainstream media at the media box were intimidating, especially when I was armed with only an iPhone — 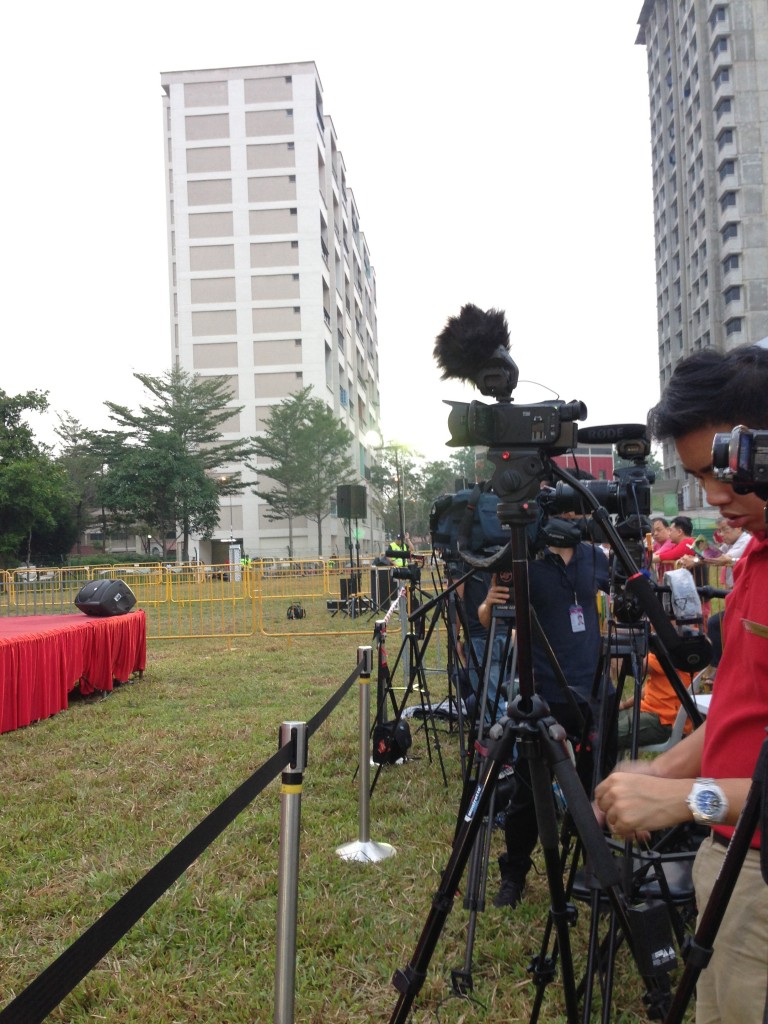 By 7pm, the crowd behind me was already almost full, and the rally begun — The first speaker to be introduced to the audience is Sidek Mallek, who will be contesting in Holland-Bukit Timah GRC. 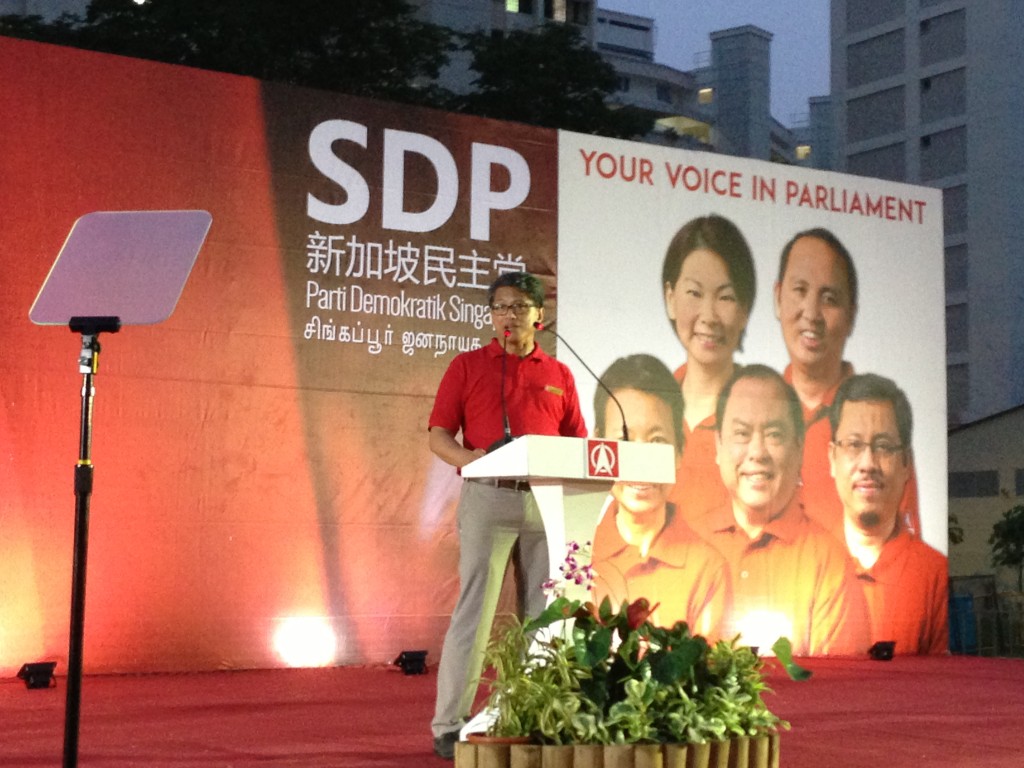 He got off to a good start, speaking about his journey in politics and how Dr Chee Soon Juan had convinced him to enter politics to fight for Singapore. He explained how the SDP has been fighting on a fair ground.

He quotes a poem from Eleanor Roosevelt to cap off his English speech and spoke in Malay for NOT more than 2 minutes, which got me wondering if he really knows Malay.

After all, Sidek is the same candidate who wanted to answer a Malay question in English and ended up deflecting the question at his introduction.

The next speaker was Sadasivam Veriyah, who is contesting at the Bukit Batok SMC. Sadasivam spoke in three languages (Malay, Tamil, and English). He conceded that he was unable to visit all the residents of Bukit Batok SMC, citing the lack of campaign days.

9 day campaigning is not sufficient — if they had gave a few more days, the PAP will lose.

The Bukit Batok SMC challenger also suggested that his opposite number, PAP’s David Ong, is not fighting for the residents of Bukit Batok. He cited the fact that the Town Council fees increment at Bukit Batok were more expensive at $300, compared to just $250 at other Town Councils in Singpoare.

Up next is Jaslyn Go, who has her sights set on Yuhua SMC, currently helmed by PAP’s Grace Fu. 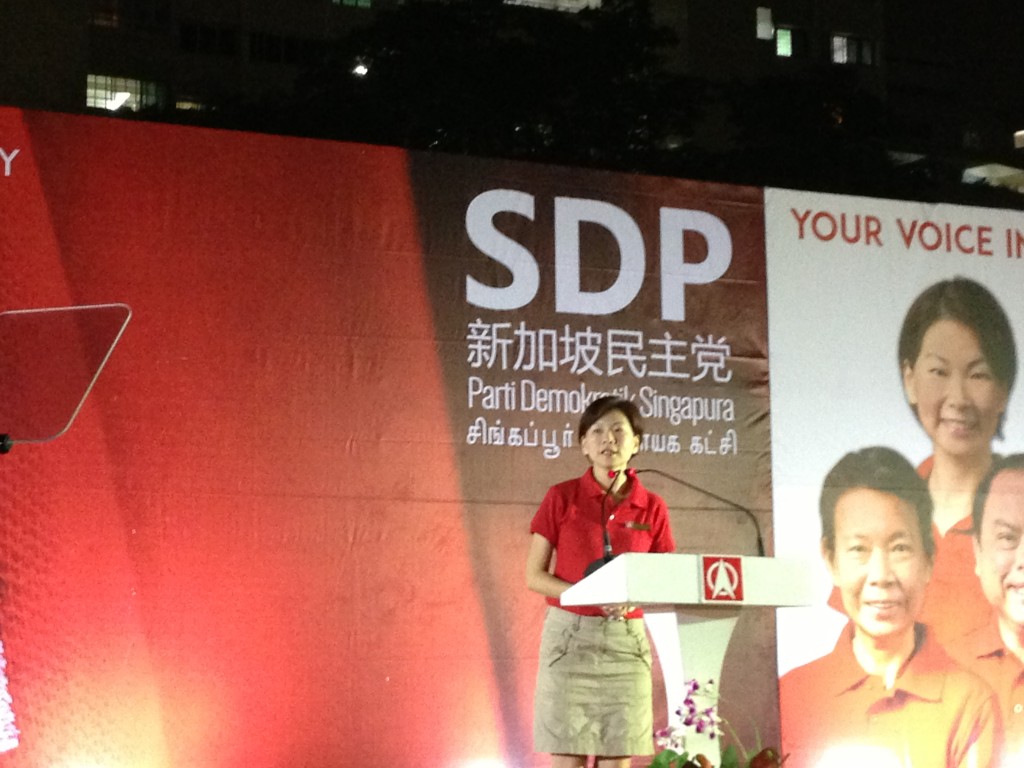 In her usual combative style, Jaslyn Go lashes out at the PAP for criticising the policies that the SDP recommends, and make her point clear that track record does not matter.

The PAP says that the SDP has no track record. But what are the track record of the PAP? High COE, high cost of living, high ministerial salaries, and frequent train breakdowns.

Is this the track record you want?

The crowd was definitely energised by Jaslyn Go’s speech.

In fact, I didn’t think the crowd would be this excited again. That is, until a certain Dr Chee Soon Juan came along later.

Damanhuri Bin Abas, candidate for Yew Tee-Marsiling GRC took the stage with a lengthy speech in Malay which I didn’t understand a word of. 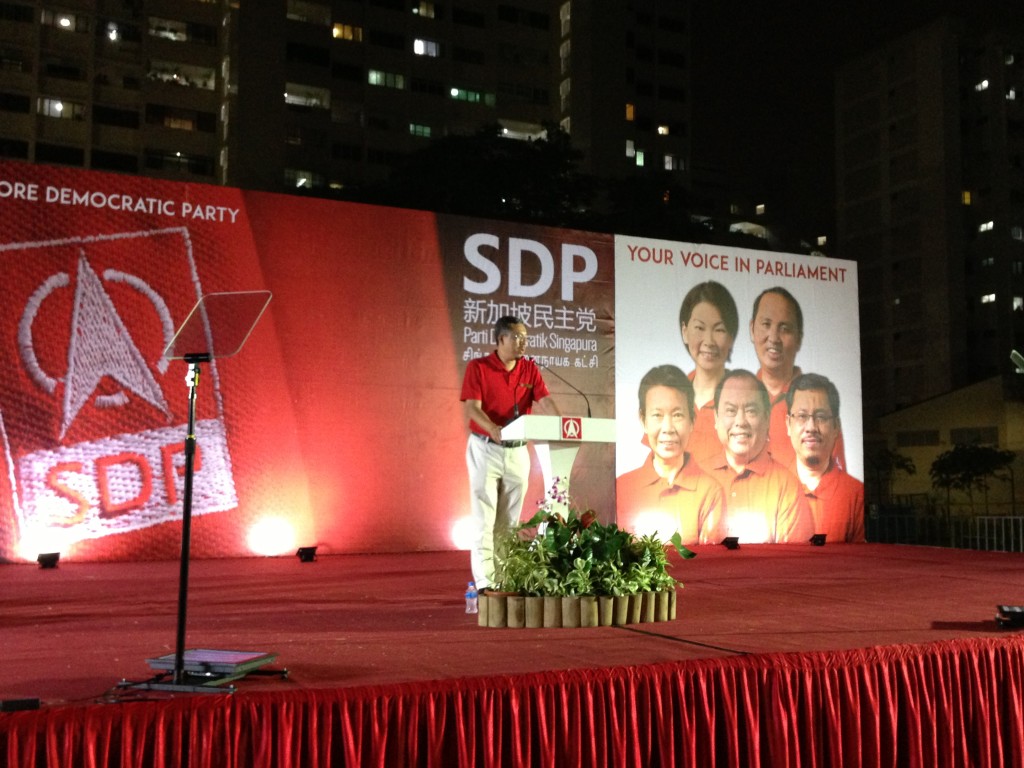 He moved on to English for a short while, suggesting the problems that Singapore faces today are actually created by the PAP themselves.

The problems we faced today, are caused directly and indirectly by the PAP!

Bryan Lim was the next speaker from the Yew Tee-Marsiling.

He let in that he wanted to join politics at the age of 8 and had felt greatly insulted by the graduate mother scheme enacted by former Prime Minister Lee Kuan Yew, because his mother was an illiterate.

At this point, I noticed that the crowd was getting weary and quiet.

After Bryan, John Tan took the podium, and his impactful speech woke up some of the crowd. 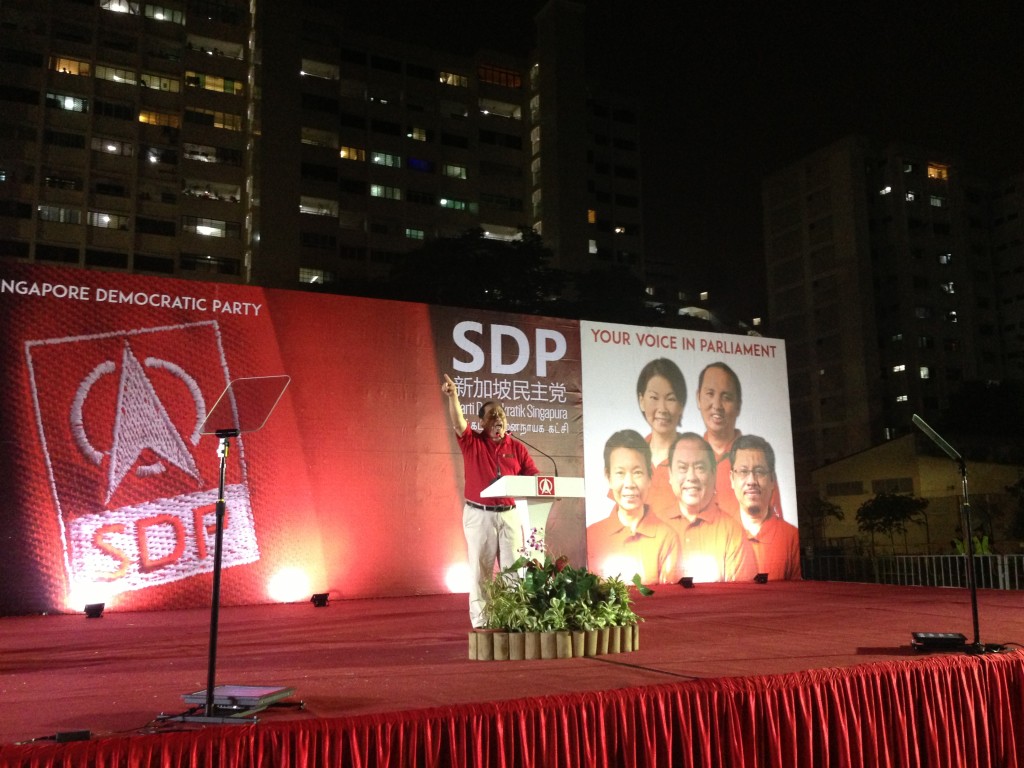 John urged all the audience to read about the policies of the SDP, boasting that the SDP is the only political party that has a transitionary plan for the Town Council in the event that they win any seats, while taking a dig at the PAP.

Chong Wai Fung was next to take the podium. I have watched her speech a few times online before, and she wasn’t at her best this evening. 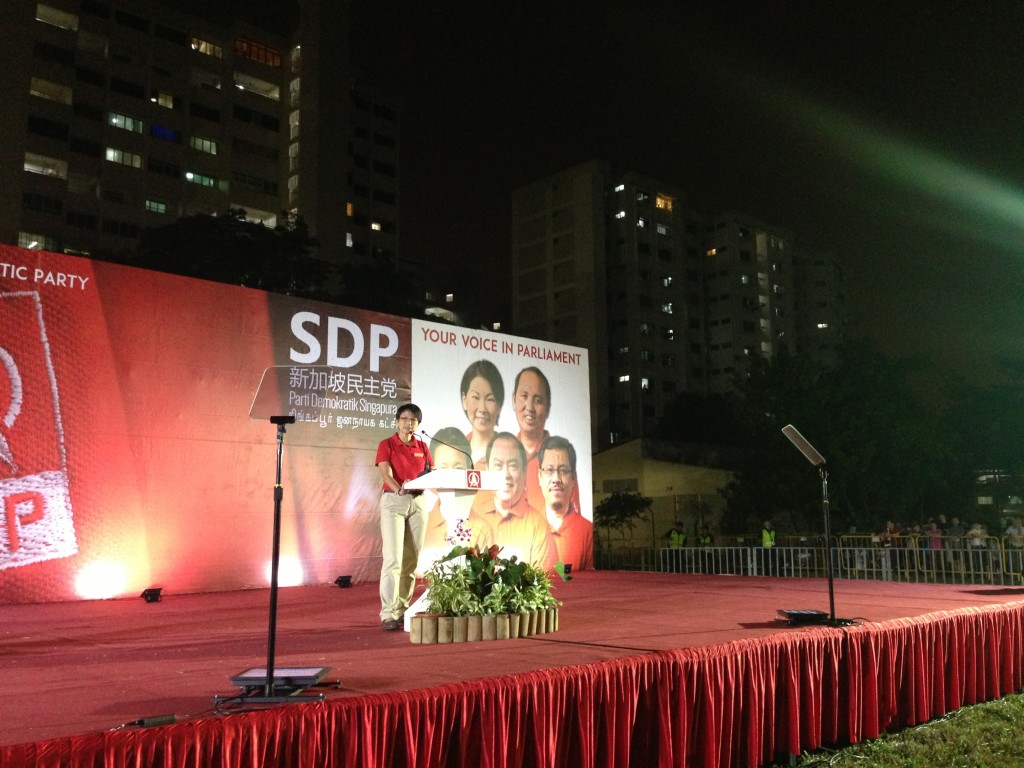 In her speech, Ms Chong attacked that PAP for fear mongering, by suggesting that Singapore will collapse under the policies of SDP. She also asserted for a need for more diverse voices in the Parliament.

One the best speaker, Dr Paul Tambyah was next to take the stage after Wai Fung. His introduction was clearly delayed by an entrance made by Dr Tan Cheng Bock — 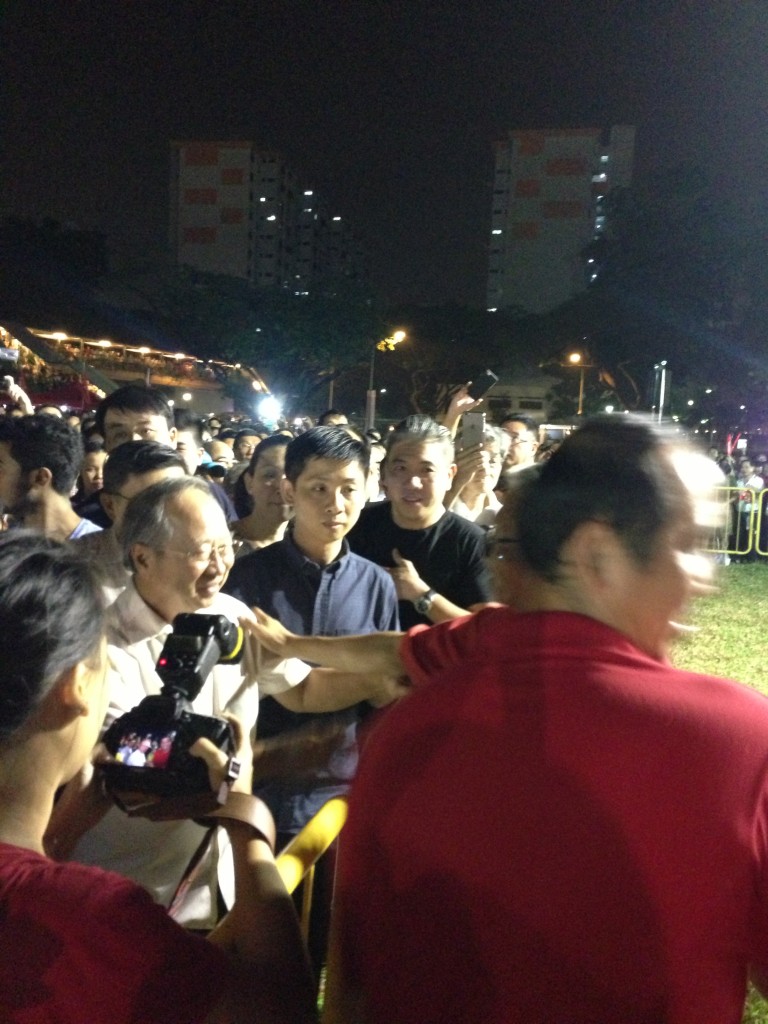 Dr Tambyah reiterated his principle for clean politics, urging the audience not to boo his opponents. 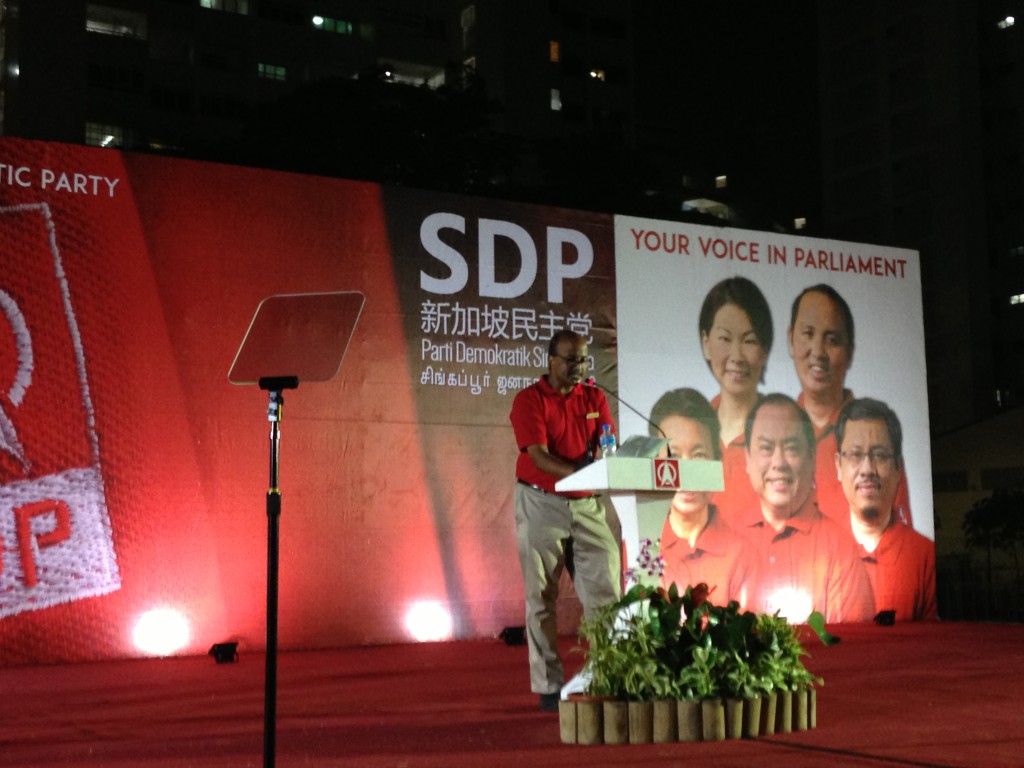 He also let in that he personally knows Sim Ann’s husband and Dr Vivian Balakrishnan.

I know Sim Ann’s husband, he is a doctor as well.

And I know Dr Vivian Balakrishnan personally, he is a senior at the medical school, we both also had sparred with each other in a debate competition before — I won’t tell you the results.

It was as if the entire rally was made for Dr Chee Soon Juan. 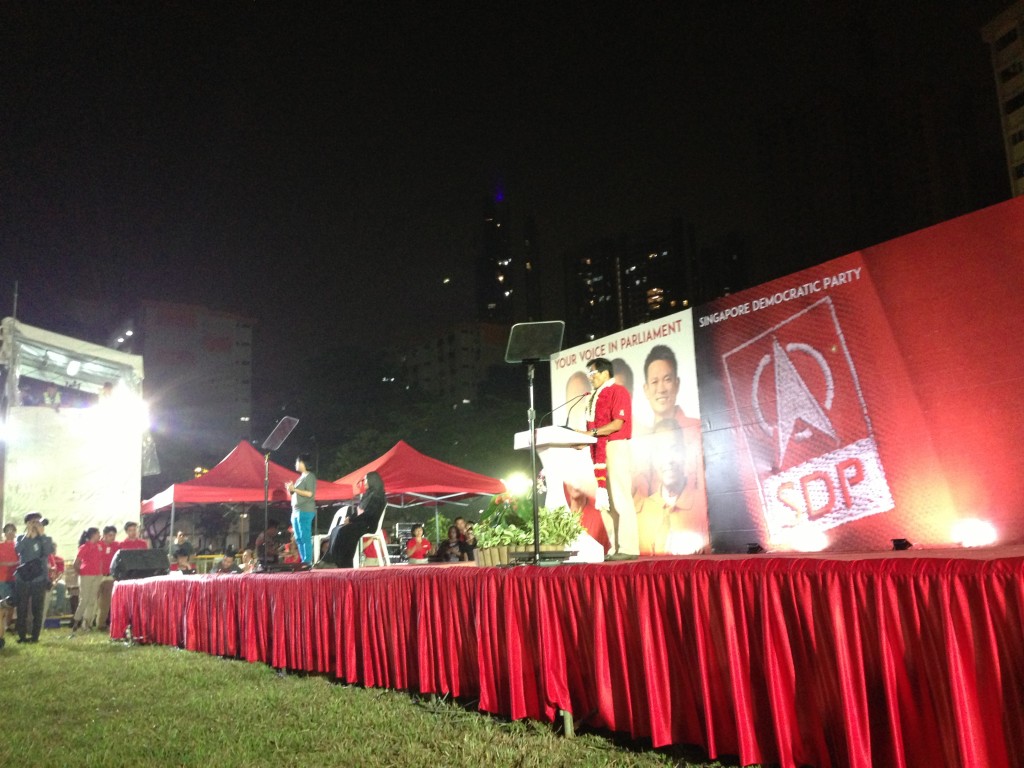 His entrance sparked the loudest cheers and roars from the audience, photographers (me included) were scrambling around to get a good shot.

When Dr Chee started his speech, the audience at the front actually shouted at the photographers (again, me included) to sit down and not obstruct their view.

I had been standing in front of them at the media box all along. 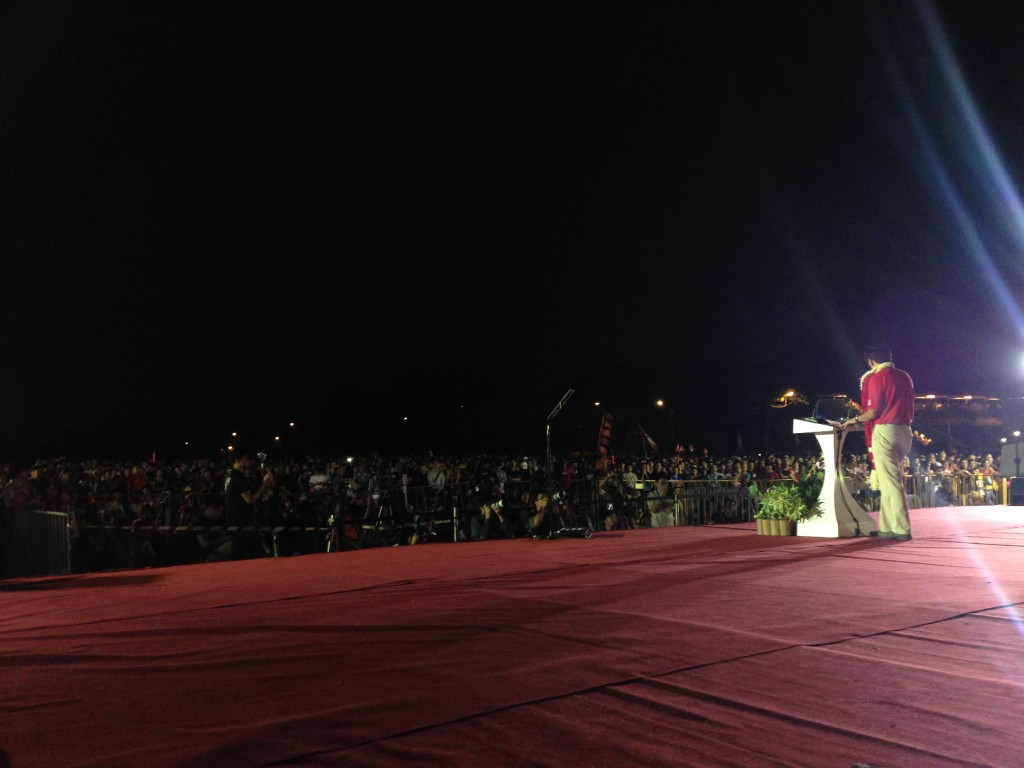 Dr Chee begun his speech in Hokkien. I found myself unable to take any notes.

Later, Dr Chee spoke in English, and I found myself listening intensely and had actually forgotten to take notes at all — he was that good a speaker.

It was also Dr Chee’s speech that I saw people seriously listening intently, their attention hinged upon every word that he spoke — 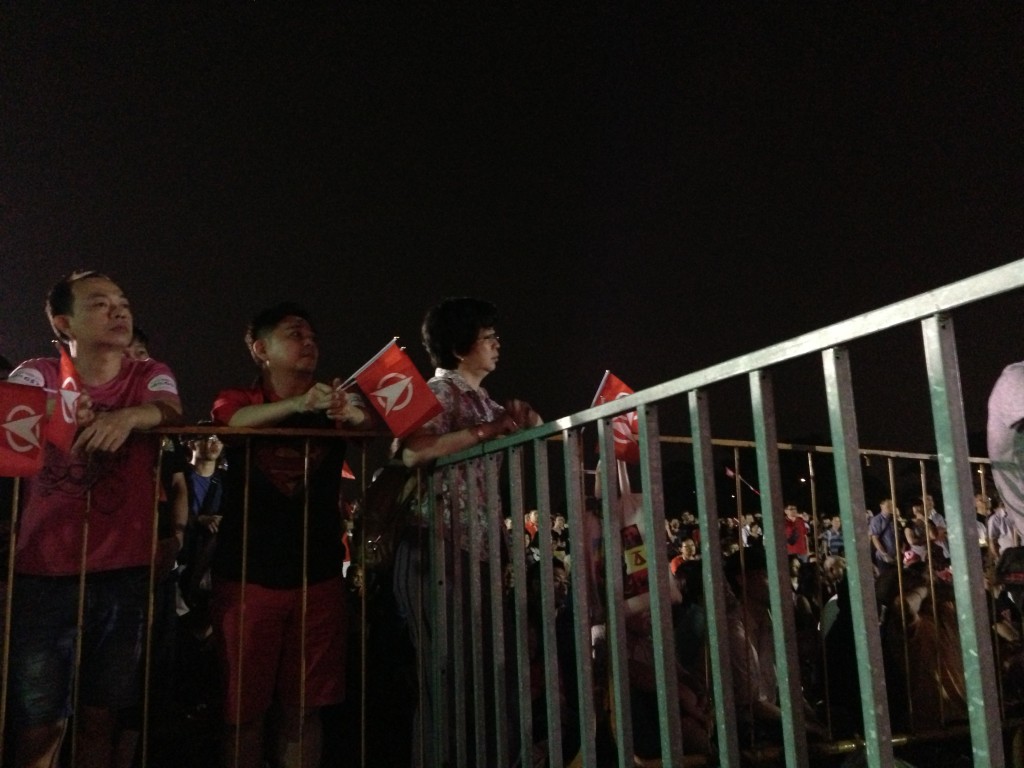 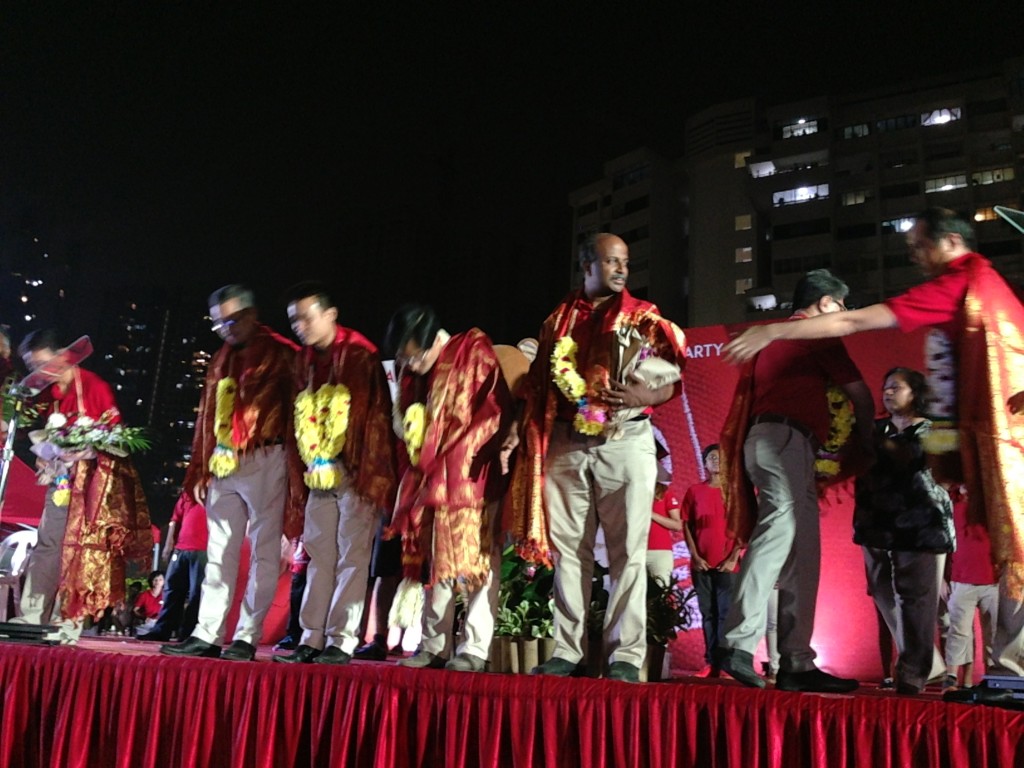 The entire SDP rally was totally in the name of Dr Chee Soon Juan.

It’s obvious that Dr Chee is the main pulling force of the SDP.

I had watched Dr Chee speaking at rallies via live stream, but listening to his speech in real life is simply different. Even sleeping reporters who had been relaxing throughout the entire rally actually sat up to listen to his speech.

Dr Chee was that good. If this rally is any thing to go by, all I can say is — all the best, Dr Vivian Balakrishnan.