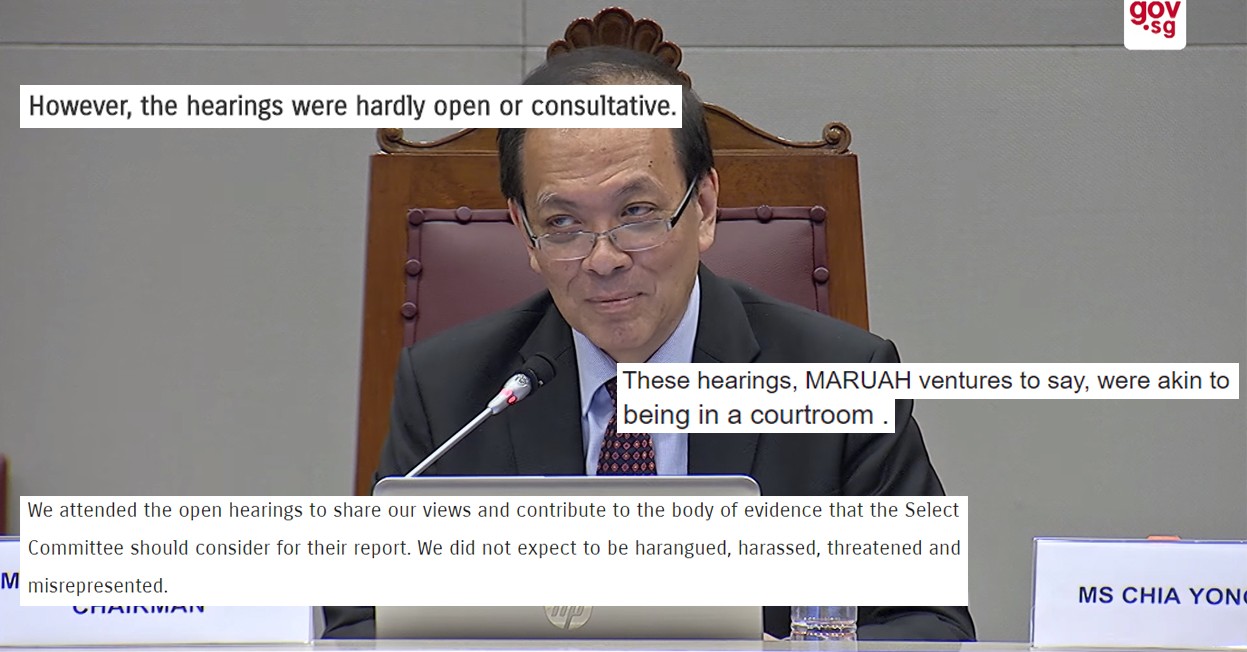 The Select Committee against deliberate online falsehoods concluded their public hearings with an epic 6-hour K Shanmugam-PJ Thum standoff last Thurs (29 Mar). But it seems like the drama may have only just begun.

That’s because 5 groups and individuals who spoke at the hearings have come together to dismiss the entire event, branding it as “hardly open and consultative”. The statement, signed by the Community Action Network, Kirsten Han, Thum Ping Tjin, Terry Xu, and Function 8, was released on Mon (2 Apr).

In addition, human rights group MARUAH also expressed their concerns about the discussions in a Facebook note dated 3 Apr.

Later on the same day, Select Committee chairman Charles Chong told Channel NewsAsia that the investigations are underway, and that they would provide updates to the accusers.

Let’s take a closer look at what went down.

1. The Select Committee did not adhere to its own Terms of Reference

Set up with the purposes of reporting on the reasons and consequences of online falsehoods, the Select Committee was also supposed to identify how Singapore can combat such falsehoods. Instead, the statement points to the examples of Dr Thum – who was questioned for 6 hours over his work on Singapore history – and Ms Han – who was questioned over an article she had written as the committee failing to do its job.

In addition, Dr Thum had made recommendations to combat online falsehoods, but was not able to speak about them at the session.

2. The Select Committee did not appear to be interested in soliciting views

Instead of gathering opinion, the Select Committee asked leading questions and demanded yes or no answers, despite the “importance of context and nuance”.

As mentioned earlier, Dr Thum was not able to elaborate on his submission, while Jolovan Wham – representing the Community Action Network (CAN) – waited for six hours only for a 10 minute session with the committee. Mr Wham was also unable to explain views expressed on his submission.

3. Articles were presented and selectively quoted in ways that were sometimes misleading

Three paragraphs of an article from The Guardian was mentioned. In it, former UK Prime Minister Tony Blair used the word “dangerous” to describe the Freedom of Information Act. However, the rest of the article “paints a different picture”, according to the statement.

4. Following appearances before the Select Committee, some submissions were grossly misrepresented within the official Summary of Evidence

Ms Han, Mr Wham, and Mr Xu have separately issued their concerns that the official Summary of Evidence uploaded on the Parliament Website is inaccurate. They all contest that records on show statements that were never made. However, the Summary has so far not been edited for accuracy. 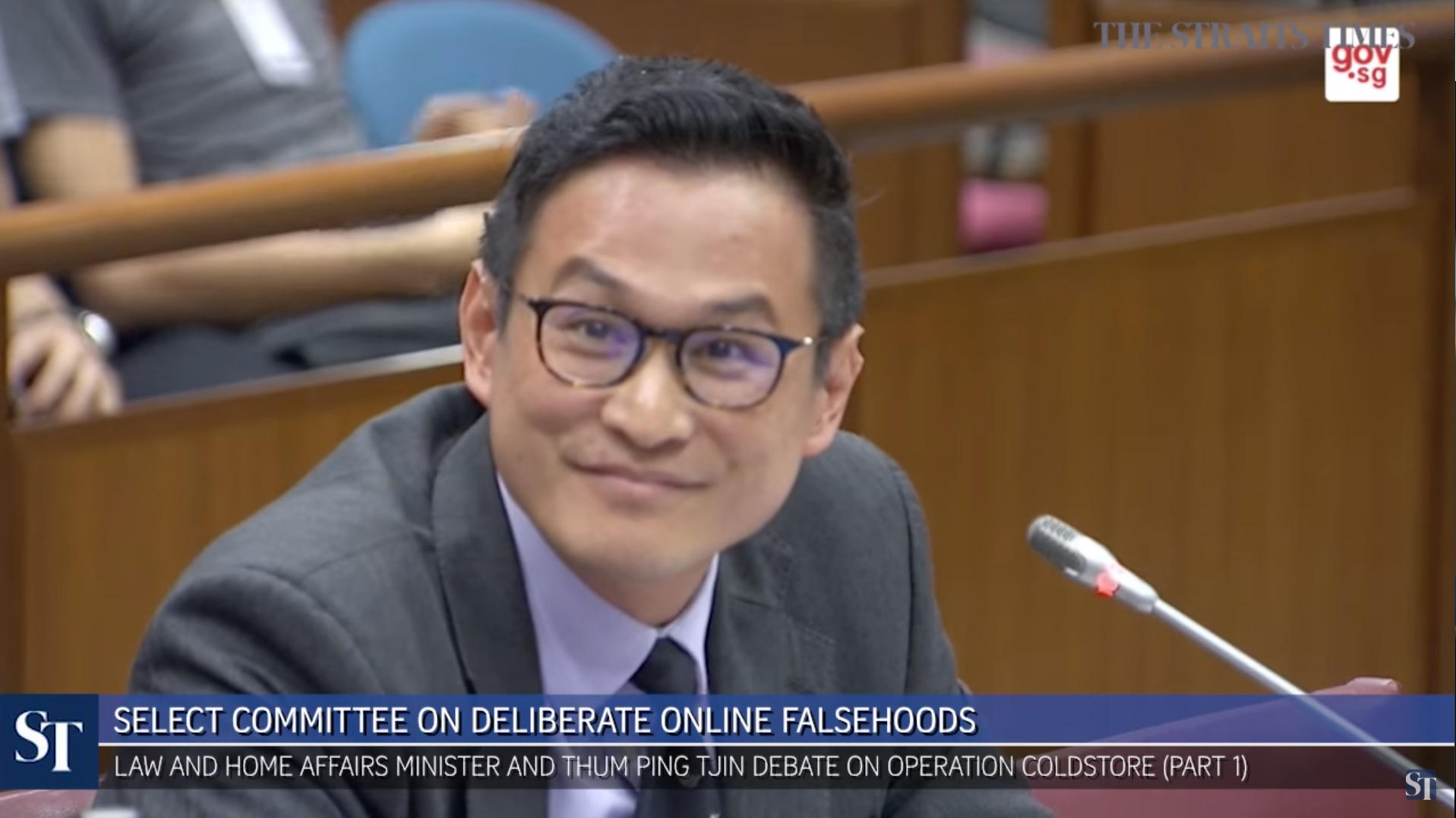 In addition, the group claim that they were “harangued, harassed, threatened, and misrepresented”, instead of actually offering their views and evidence. As a result, there could be suspicions that a decision had already been made, which would lead to a loss of public trust.

Also, they claim the schedules for submitting oral evidence was subjected to “multiple, sometimes last-minute” changes.

The statement ends off with a call for a Freedom of Information Act, and for laws against freedom of expression to be relaxed.

They described the Committee as being aggressive and taking a “confrontational stance” when interviewing witnesses, and that the committee was unnecessarily patronising and disrespectful in the process.

MARUAH also claimed that the hearings were conducted more like “in a courtroom”, noting the lack of opportunities given to witnesses to explain themselves. They also and took issue with the frequent use of “yes or no” questions.

In response to a CNA query, Charles Chong, chairman of the Select Committee on Deliberate Online Falsehoods, had this to say:

We have received the feedback/complaints… The Select Committee will look into the allegations and review the transcripts before responding to those who have written to us.

In addition, a Parliament spokesperson said that the committee is “reviewing” requests to amend the Summary of Evidence that was claimed to be inaccurate.

The spokesperson also helpfully pointed out that the original videos of the interviews are available online.

Who Has A Point?

While the Committee is examining these claims, there are some actions that require more immediate action. For example, the fact that the Summary of Evidence already uploaded on the Parliament website is still inaccurate, with no explicit deadline on when the edits will be done.

But what do you think? Have you watched the interview videos for yourself?