Sexism. Not really a word you hear a lot in Singaporean society right?

But it really should be uttered more. Especially when it affects both sexes. 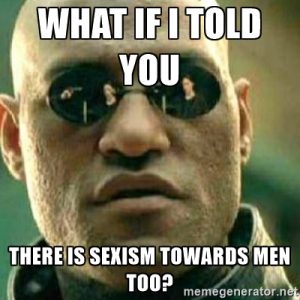 That’s right — while sexism is commonly thought of to put women at a disadvantage, both genders face sexism in Singapore in entirely different ways and extents! Maybe you’ve received sexist treatment and simply brushed it off as “the way things are”.

And that’s how most sexism in Singapore exists — not in our faces, but as institutionalised norms and habits.

Since the guy’s side of sexism always goes unheard, let’s begin with them.

1. Men Cannot Be Raped in Singapore

Yup, this is true. Rape is only defined as penile penetration of a vagina under S375 of the Penal Code.

Thus, rape of a male cannot be legally acknowledged. Even male-on-male rape is not recognised here.

It goes without saying that this law is illogical and thoroughly sexist. Men can surely be raped too.

Unfortunately, the stereotype of a man needing to always be strong and dominant makes it harder for victims to reach out for help in their state of vulnerability. 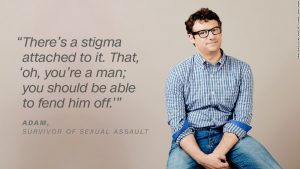 Wait. Hear me out, I’m not saying that girls are raring to go for national service, or that NS isn’t an integral part of Singapore’s defence.

But the fact that men are called up, whether they like it or not, indicates that men are seen as the natural chosen protectors of the country.

While the argument can be made that males are genetically stronger, with higher muscle mass, and are thus more suited to military requirements, that may not be true for all men. And in terms of character, there’s the argument that not all guys have the courage, discipline or ruggedness that makes them more suitable to military life than certain women. 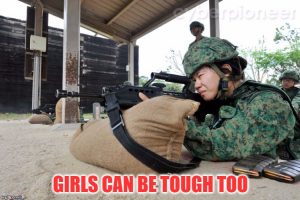 The compulsory nature of NS for all guys is just another way that men are subject to sexist stereotypes — they’re guys, so they should be suitable to serve in the military, they just have to toughen up.

Well, not every guy has to be tough. 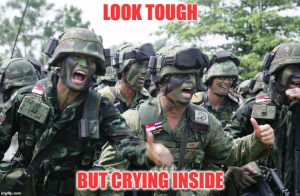 However, we respect our Singapore guys for making the sacrifice for Singapore!

The Women’s Charter stands for women’s rights and protects against misogyny, as women have often been slighted by the law. And we’re thankful for its existence, as it has helped many women.

However, the existence of the Women’s Charter neglects the male interest.

For example, in divorce cases, women can seek maintenance from their spouses, but not the other way round. This is because the charter was passed at a time when women were usually full-time homemakers and men were the breadwinners, and the charter wanted to protect the woman from losing out in the battle for matrimonial assets as she may not have contributed financially to the household.

The Women’s Charter also means a child’s custody tends to be awarded to the mother, although this can be vetoed by the child most of the time. 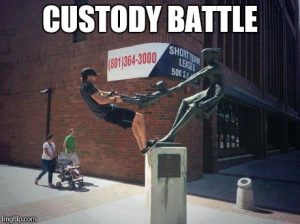 With changing times and varying situations of divorce, the positions of both parents needs to be represented. While we think the Women’s Charter should stay, perhaps new, more flexible laws can be enacted that ensure the man isn’t unfairly treated either.

All of the above stems from one overriding quality that we have come to accept as a part of life.

For example, the Chinese generally think that girls should be docile, gentle and soft-spoken. In contrast, guys are expected to be tough, strong and dominant. It would thus be frowned upon for any person to deviate from the prescribed role. The result is that men are shamed for engaging their sensitive sides.

The “Boys Don’t Cry” narrative is a great example. From childhood, pain may almost never be acknowledged by boys, as they are not supposed to cry.

This narrative also reinforces the idea that women are inherently weaker because they’re allowed to cry, and crying (as boys have been taught) is weak.

Have you ever seen your father cry?

Crying is okay! it makes you feel better, and humanises you.

While sexism against men exists, sexism against women has never gone away. Women have always traditionally been the inferior gender, and because of that, many people still hold parochial views of them, even in Singapore, even in this day and age. For an example, read our story on a radio caller who said girls are lazy.

5. No Understanding For Periods

This is an age-old problem, and women have experienced it far too many times. There’s always that one male teacher who won’t let you go to the washroom like his job depends on it.

Unlike other bodily functions however, you can’t control when it arrives — periods don’t drop you a text an hour before.

And lets say you’re in the unfortunate situation of leaking through your clothes. Instead of understanding and help, you get shamed and mocked.

Why should there be such a stigma against a natural process? Without the menstrual process, humans would go extinct.

And when guys say “periods can’t be that bad”, women just like —

According to The Straits Times, Singapore was the 10th-best country in the world when it comes to paying men and women equitably.

However, women earn less than men in all occupational categories except clerical and support. Because somehow, being female means its okay to pay you less.

That’s not remotely fair. There should be equal pay for equal work.

According to the same ST article, Singapore had a gender equality score of 0.7, meaning that Singapore has only bridged the gender gap by 70%.

Even though the gender gap is narrow in some areas, more can be done in the area of political representation. For example, we have not had a female head of state, so we scored a big ZERO on leadership.

Maybe this will change after the upcoming presidential election, if Madam Halimah Yaacob runs and expectedly wins.

We need women in political power so that women’s interests are not neglected, whether intentionally or unintentionally.

Look at what happened to Mrs Hillary Clinton in the United States, where she lost the presidency to a man despite clearly being the most qualified candidate.

Women are called “slut” usually because of what they are wearing, or because of perceived actions that are outside the norm, i.e. having a few previous relationships.

There is a tendency to equate showing some skin to being indecent, especially in sunny Singapore where girls love to wear shorts. It’s not uncommon to hear parents cautioning their daughters to dress in a less revealing manner or they’ll be “asking for it”.

When a girl is said to be “asking for it”, it seems like it was the female’s fault for attracting her rapist. This also seems to send out the message that rape is justified if the lady is dressed provocatively.

This sexist way of blaming the victim might have something to do with our unusually high number of rape cases despite Singapore being known for being generally safe. In 2014, there were an alarmingly high 163 cases reported, or 4 rapes every 9 days. Who even knows how many went unreported?

To be clear: Blaming the victim is wrong, rape is never justified and is never the victim’s fault. 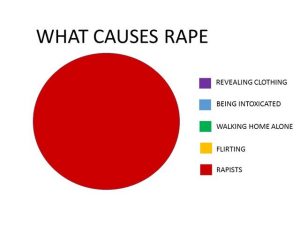 Too often, sexism has been swept under the rug and accepted in society as a normal thing.

We need to have more open conversations about it, because that’s the only way equality can be achieved.