Six dead over the weekend via three cases

A recent spate of death reports were observed over the weekend on state media. Oh no!

Should we lock our doors and hide our wife and kids? No. Let’s take an objective look at each of these cases.

On 30 January, at Park View Mansion, along 9D Yuan Ching Road, 37-year-old Ken Ong, attacked his wife and domestic maid at their home before turning the blade on himself. Ong and his wife died from their injuries in hospital while the maid is in stable condition.

The couple leaves behind a 6-year-old son.

At 8:11 am on the same day, media outlets received a “Final Note” from Ong, who also posted the note on Facebook. The couple were in the midst of divorce proceedings when the incident occurred. The event appeared to have been pre-meditated, if his previous postings on Facebook are to be believed.

A 31-year-old man and 29-year-old woman were found motionless in a Hotel 81 room at Geylang Lorong 16 on 1 February.

Reports have pointed to both being work permit holders — the man was from India and the woman from Indonesia. The woman was found with injuries, and there was blood in the hotel room.

The case was reported as possibly being a murder-suicide.

A couple was found at the foot of Block 53 Chin Swee Road, also on 1 February. They had apparently fallen from the block. Both of them were pronounced dead minutes after the other. The woman was clad in just her underwear while the man was fully clothed.

Police have classified the case as unnatural death.

With six deaths reported just this past weekend, Singaporeans took to social media to express their thoughts on the news. We don’t make this stuff up. 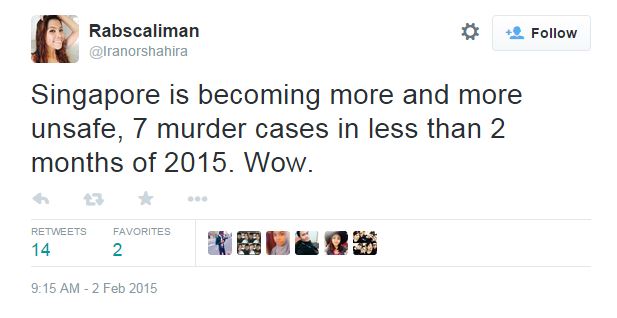 The death reports also seem to coincide with a report from a few days ago regarding crime rates jumping by 7.4%, which may have alarmed Singaporeans further, even though the increased crime rates largely do not involve murder, and certainly not murder sprees.

But hey, SPF officers are wearing cameras on their bodies. Not to mention the liquor law passing will reduce the amount of people being drunk at your void deck.

These death reports may have been overblown because they came in a series over the weekend. All of the cases were isolated and while there may be a connection between Singaporeans being unhappy (with their spouses?) and the purported increase in murder-suicide cases, Singaporeans, or even foreigners aren’t driven to murder for the most part.

Let’s not get swept up in hysteria until something bad actually happens. *touch wood*