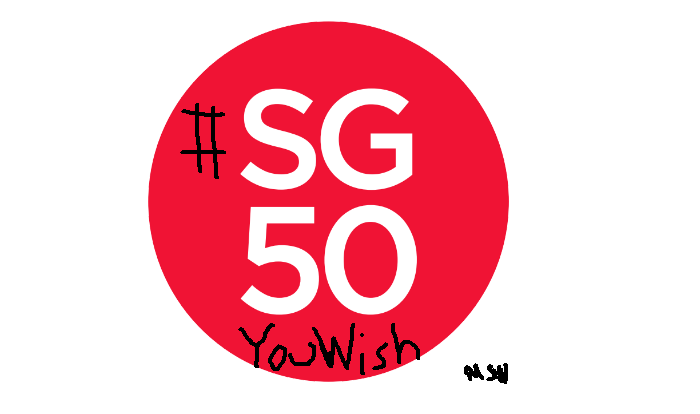 First a public holiday, what next? S’poreans weigh their options on Twitter with #SG50YouWish

Public weariness over #SG50 is beginning to take its toll — and we’re only into the third month of celebrations. Advertisements and discounts abound, but Singaporeans are beginning to complain about having SG50 shoved down their throats everywhere they go.

However, spirits will have been lifted at news of 7 August becoming a public holiday, something nobody could have possibly imagined, especially after us having only 11 public holidays for the longest time.

Seemingly in response to this unprecedented move, mrbrown started a hashtag on Twitter: #SG50YouWish. If the Government can give us a public holiday in the name of #SG50, why not all our outlandish and cheapo desires, right?

Though not initially specified, most of the tweets related to #SG50YouWish featured the number 50.

Here are some of the tweets.

This one by mrbrown got the ball rolling:

In response to Speaker of Parliament Halimah Yacob’s plea to Singaporeans to not go overseas:

Gahmen says 7th August Public Holiday has been revised, only to be given to Singaporeans who are not going overseas. #SG50YouWish

Indeed, even the wildest dream has to been somewhat realistic (tongue-in-cheek, of course)

Can you at least be a little realistic? RT @therealfakeNTU: The MRT doesn't breakdown for 50 days. #SG50YouWish

Deep down, every Singaporean suffering under their measly (but faster!) data plan cap wishes for this:

In reference to two words which every NSman finds a burden:

Breaking: Exit Permits required for all Singaporeans planning to leave the country during #SG50 #LWE. #SG50YouWish

The 50 game is strong with this one. #ReturnOurCPF

Sweet dreams are made of this:

Imagine if the Gahmen really made this happen. Bricks will be shat.

Some more politically-inclined tweets, mainly related to the activists who distributed leaflets in Aljunied GRC:

Govt to start pouring 50 dollar bills from planes in Hougang and Potong Pasir if they would vote for PAP during elections. #SG50YouWish

50 PAP activists will give out flyers at opposition wards that praise opposition achievemens. #SG50YouWish

We can all dream, right?

Sure, most of the tweets related to #Sg50 were intended for a laugh, and satirist mrbrown has brought the laughs to serious matters for years. But you know the Government is really going all-out with their #SG50 promotions when they are even willing to give a public holiday despite strong calls for one going unheard over the years.

Who knows what else the Government will come up with for SG50? Personally, we’re rooting for 50 Cent to grace us with his presence 🙂

Maybe the Government will never fully take care of every citizen like a welfare state, but at least they’re doing something. Even if that something is for the sake of a celebration which might have started too early.